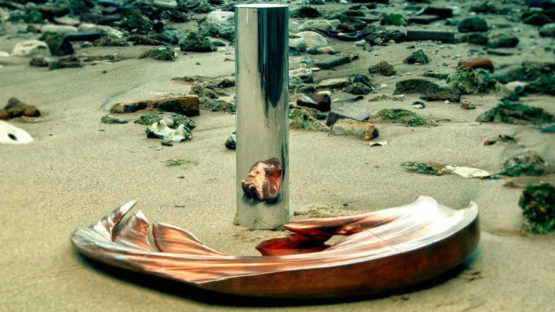 Always torn between art and physics, Jonty Hurwitz‘s work takes the context of human perception as the entry point of its aesthetics. Bridging the gap between artistic and scientific, he creates the communion of the two opposites, merging the spiritual and practical through numerous calculations and predictions about unique way in which our mind interprets the spatial information we receive. Starting from mathematical tools, every piece of art goes through months of preparation, until he finds the right manifestation and embodiment of calculated formulae. Using the various mediums, as Perspex, steel, resin, powder, copper, and acrylic, Hurwitz makes each work both and engineering and artistic challenge.

Hurwitz was born in Johannesburg in 1969. He gained his education in Electrical Engineering at the University of the Witwatersrand and get the position of the full-time researcher in the Remote Sensing Group at the University of Cape Town. He spent some time traveling India, studying Yoga and wood carving. In 2009, he produced his first sculpture Yoda and the Anamorph and instantly won the People’s Choice award in the Maidstone Museum and Art Gallery Bentliff Prize. Four years later, his anamorphic work was discovered by the art blogger Christopher Jobson and in a few weeks being online, it was estimated that the sculpture received over 20 million views.

The significant body of work makes his anamorphic sculpture inspired by similar work of the some of the most important names in art history, from Leonardo Da Vinci and Hans Holbein, to M.C. Escher. Considered as a pioneer in creating catoptric (mirror) sculptures, Hurwitz explains his ingenuity with calculations and use of algorithm derived from the mathematical constant Pi. The Kiss of Chytrid draws attention to the mass extinction of the frogs because of the spreading of an exotic fungus Chytrid, the artist points out the human superiority in the battle of species on earth.

He is considered as the first artist who created catoptric sculpture

The Smallest Art Piece in the World

In 2014, Hurwitz invented a new sculptural technique in the field of Nano art. In a collaboration with the scientific team from the Karlsruhe Institute of Technology and Weizmann Institute of Science, he created the smallest artwork in the world, approximately 300 nanometers big, using the multiphoton lithography and photogrammetry that could be observed only through a non-optical method of magnification like a scanning electron microscope. In 2015, Hurwitz’s sculpture Trust was declared as the Smallest sculpture of a human by the Guinness Book of Records.

With the rapid development of technology, everything progresses faster that human perception is able to follow and the line between the science and fictional becomes blurred. After scanning the original object, the artist prepares his piece in special 3D and mathematics software that creates proper proportions and distortions that are revealed only through the use of cylindrical mirror that inverses the shapes. Intersecting the realms of both science and art, Hurwitz creates sculptures in order to enter the mind-bending world of illusion.