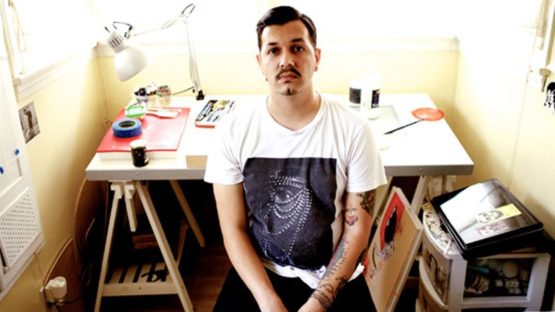 Joshua Charles Hart is an American artist whose illustrative style continues to evolve with the incorporation of painterly techniques of acrylic washes where colors and figures are blended into vivid and often surreal depictions of personal visions and intricate words and poems seamlessly integrated into the work.

Hart was born in 1979 and grew up in Santa Maria, CA. He attended Otis College of Art and Design and was awarded “Best in Show” in 2004 for illustration.

He creates his paintings at home in West Hollywood in his studio named after his mother “Studio Lucille”. His best friend is his pug named Jinx and finds his ultimate pride and joy in his young family, wife Alexandra, children Mia, and Milo.

Hart’s body of work has always imbued a deep dense of tender emotion with characters and themes that seamlessly integrate both haunting expression and ironic truth. With Harts latest series of paintings lies some of his most personal work to date. A collection of deeply personal expressions that focus on finding your voice and trying to be heard when you feel no one is listening.

As a child Hart was often described as “so quiet, so small”, and would create entire worlds in his head as a means to fill the void left by a social awkwardness. Inspired by his early art heroes Jean-Michel Basquiat and Frida Kahlo, Hart continues to push his own creative limits. From his head to his heart, through his hand to a wood panel, we see first-hand in Hart’s work, the power of finding your voice.