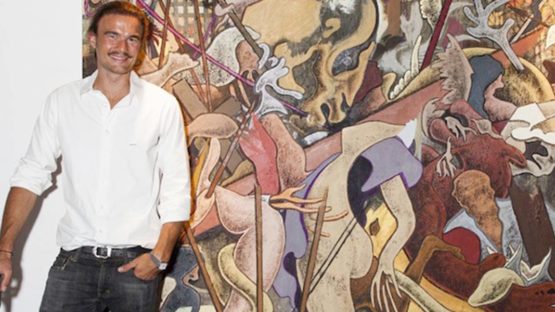 Julian Tshollar’s creates images whose visual impact lies in their narrative potential and in the experience of illusion. All that has led him to use the human figure as the substrate for his paintings and has resulted in a process of figural play.

His international upbringing has led him to search for a visual language that has the potential to grow in a hybrid space between cultural identities and communicate across cultural differences. So far, Julian’s work has aimed to investigate the possibilities hidden amidst the junctures of materials, formal structures, and different approaches to figuration.

Throughout Julian’s art education, he experimented with figurative modes of painting and with European and Eastern traditions in figurative art, philosophy and spiritualism. His faith in the potential of the figurative tradition within a modern context stems from his conviction that the expressive subjects of the past must necessarily be incorporated into visualizations of the present if art is to retain elements of our cultural, historical and spiritual heritage.

To support his practice, Julian Tshollar has engaged extensively with theories on the origins of cultural identity, symbolic systems, theological knowledge, which Aristotle described as ‘knowledge of things that have both independent being and freedom from change’, and ideas and theories surrounding allegorical modes of representation. Artists whose ideas and conceptual frameworks Julian endorse include – but extend far beyond – Jonas Burgert, Kitaj, Chagall, Daniel Richter, Breughel, Neo Rauch and Anselm Kiefer.

Julian’s ambition for the future is to discover the rules underlying the generative order that governs the patterns which eventuate in the creation of forms, environments and even human beings; to develop an integrative visual language that has the potential to assimilate new perspectives; new knowledge fields and has the ability to resonate with a wider audience.