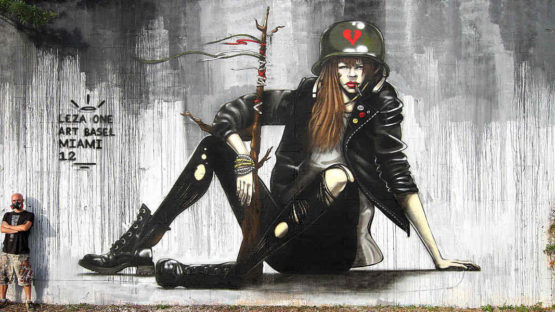 Leza One is a contemporary artist born in Geneva, Switzerland, in 1980. He is often described by some as a contemporary Caravaggio. A certain similarity refers to the way of presenting human emotions such as joy, courage, desire, fear, melancholy, violence etc. His art filled with emotion and drama is a perfect example how street art can be grand and sophisticated.

Leza was raised in Geneva by his father who comes from Bosnia-Herzegovina and by his Swiss mother. He graduated from the Geneva Art School as a graphic designer. He has been drawing since a kid and started graffiti at 15 years old. Since then Leza has been experimenting with tags, throw-ups, 2D, 3D letters and backgrounds for almost 15 years.

In 2008 he showed his artwork on canvas for the first time in Geneva. One year later artist is invited to participate to a collective show in Los Angeles with Munky King Gallery. In 2010 Leza become a member of AOS (Army Of Snipers), a group of International artist collective founded by Aaron Woes Martin (Angry Woebots). In 2011 he was invited to paint a mural and show his artwork in Wynwood Miami for Art Whino Gallery during Art Basel Miami. From that year onwards, Leza One’s work is gaining increasing attention of the public and international galleries. His most recent exhibition of “Urban Muses”, displayed on objects he found on the streets, drawn a lot of attention.

Leza One lives and works in Miami, Florida.