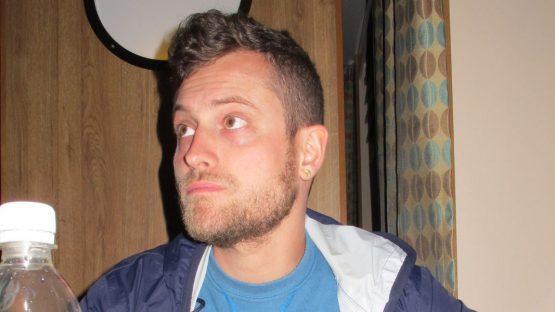 The Swiss artist Luca Schenardi became famous for incorporating photographs of Teletext seen on the TV every day into his art, thus creating amazing illustrations. The process of the switchover from analog to digital technology has left its marks in the form of inconsistency, which the author found very interesting and inspiring. He used such and similar sequiturs and glitches to transcribe them into self-made A5-size notebooks that include sketches. In his pieces, he covers daily news, with all the utter absurdities and uncanny truths. His artworks are sometimes peculiar, presenting a seemingly provocative view of the ‘normality’, characterized by grotesque and oddity.

Background and the Artistic Navigation

The author was born in 1978 in Altdorf, Switzerland. He studied illustration at the Lucerne University of Applied Science and Arts. Luca also works as a freelance graphic designer and an artist. The media he prefers is Teletext, as the errors that it provides give him enough material to make strong visual images, processed through his powerful imaginative world. Schenardi expresses himself by using criticism and cynicism to address certain questions and themes. The sophisticated use of irony and off-beat humor allows him to overcome the prevailing cultural pessimism that is omnipresent today. The illustrator’s approach is in many cases described as a novel, for its relation to the news about war and calamity seen in the world, represented in the guise of ticker headlines.

The Style and Projects of Luca Schenardi

Luca noticed that while watching condensed story headlines, they were scrambled and randomly mixed, thus forming funny compositions. He called them Meyer spricht von Gratiskaffee – Meyer calls it free coffee, as they come with no expenses for the viewer. The eclectic and stratified language that is seen in his paintings, photography or graphics constitutes disorienting universes. His imagery combines primeval landscapes and futuristic environments together with figures or faces similar to puppets and statues. In 2009 the project An Vogelhäusern mangelt es jedoch nicht won the first prize from the city of Lucerne. It is an art book which brings together drawings, computer illustrations and specially created bird portraits with the focus on humans and their impact on the wild world. In this way, he shows the contrast between nature and culture, perceived through the metaphor that unmasks and demystifies the present condition of the society.

The Awards and Publishing

In collaboration with Lina Müller, the author won 100 best posters of Germany, Austria, and Switzerland 2011 prize. His works were published in a number of magazines and newspapers such as Das Magazin, Sonntage Zeitung, Rolling Stone and Strapazin. So far he made around twenty-five notebooks with roughly eight hundred pages. Surely, there are a lot more to come as that already impressive number will only continue to rise.

This artist is represented by the Galerie Guillaume Daeppen.