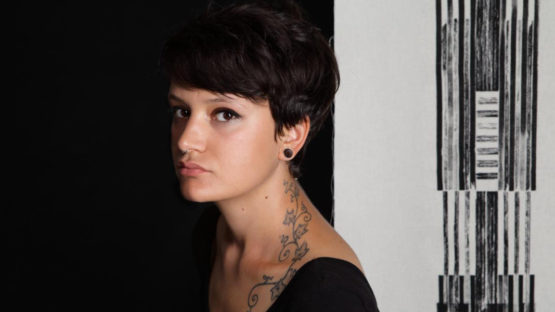 Martina Merlini is an Italian artist whose work is known for its constant evolution. Starting with illustrations, she explored new techniques and materials that are all reflective of her search for a formal balance and geometrical harmony. In the last years, she has developed and perfected her own technique using wax and enamel, trying to define a rawness that reminds of the typical casualty of nature, and yet the invisible rules that flow through. The young artist thrives on experience and learning through which she gains knowledge of her own self. This newly gained knowledge permeates through a variety of expressive contexts such as street art and installations.

In search of balance, Martina uses materials such as wax and varnishes on poor media like paper or wood. The quiet and powerful compositional balance is found when strict, geometrical lines juxtapose the flow of natural instinct and impulses. Born in 1986 in Bologne, Martina has come a long way, having a number of exhibitions dedicated to her. She has participated in a variety of events and festivals, including Living Walls, which was the first festival of street art done by women, in Atlanta, the USA in 2012, and the prestigious Le Mur in Paris in 2015.

As a keen researcher of human nature, Martina plays with geometrical lines, investigating the notion of limit in a subtle and refined way. Perpetually poised between the rational and the irrational, the artist utilizes dense pictorial traits symmetrical by nature to continue her research. As the lines begin to disjoint unexpectedly under the impulse of primordial forces. In a constant struggle with his own limitations, it is in human nature to turn elsewhere in search of a way to break the boundaries. The only way to surmount what seems to be an insurmountable barrier is with imagination. Only this way can the limits be re-invented and re-created, and the artist is the one who holds the power of manifesting and projecting these newly found limitless forms of expression.

Merlini’s work has been exhibited across Europe and the USA where she was on residency at White Walls & Shooting Gallery in San Francisco. Continuing to explore the thin line between reality and imagination, surmounting borders, this young Italian artist is gaining recognition with each piece she does.