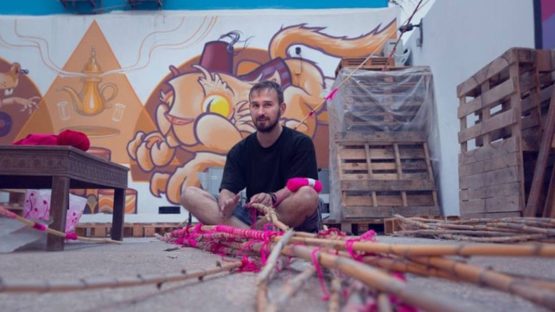 Matthieu Exposito is a French multidisciplinary artist who works in a variety of media including drawing, painting, performance and installation.

Born in 1981 in the Paris area, Exposito developed a love of drawing during his childhood. He began to draw at an early age and continued making drawings and paintings throughout the years leading to his decision to become an artist.

He graduated from École nationale supérieure des Beaux-Arts in Nancy, France in 2005. In his artistic practice Exposito depicts scenes of life with felt-tip marker and Posca like in his famous series of work Légendes Urbaines (Urban Legends) and Autour d’un verre (Over a Drink) that he has developed for the past ten years.
Apart from drawing and painting, Exposito makes performances and installations in which he criticizes modern society.

Represented by Galerie Géraldine Banier in Paris, Exposito has participated in over one hundred individual and collective shows throughout France and abroad.

Matthieu Exposito is based in Nancy, France.