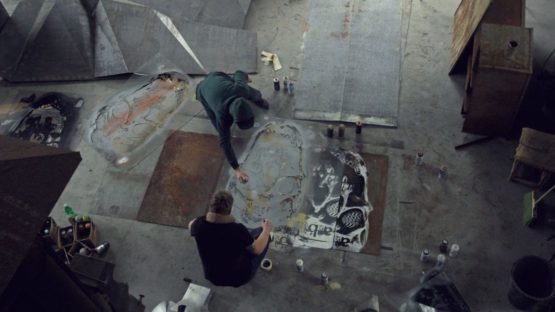 Monstfur is a collective of artists from Poland. The art of this duo is famous for the personification of life and death, as such. The precision of doing everything by hand, allowed them to achieve the structure they want and to win numerous prizes. Their collaboration represents the combination of modern technology and past experiences. The remarkable stencils made by these guys can be seen on rusted steel sheets and redundant signage, as well as on streets, and on the walls of galleries around the world. These colleagues show the world that is altered and shaped by human activity. Monstfur is an organism that rests on the remnants of the previous era and feeds with the products of pop culture.

Monstfur’s Beginnings and the Inspiration

In some way, Monstfur can be described as a visual author, known for using hand-cut stencils to show everyman interests and joy, but also his weaknesses, habits, and deviations. The inspiration comes from the Polish absurd sense of humor, alongside from people’s curious traditions and behaviors. Many of their pieces evoke the 1980’s childhood memories, marked by the industry of that time, with all its designs, urban dystopia, and social infrastructure.

In some way Monstfur can be described as a visual author, known for using hand-cut stencils

The Technique and Projects

The technique of cutting and preparing all elements by hand allows them to be exact and flawless, with still lots of space left for experimentation and exploration. Rust in Peace is a cycle of about twenty works made in 2013 and 2014 by the artist duo, as a reaction to the bankruptcy of the first Polish locomotive factory called Fablok. This series kinda pay respect to trains, locomotives, electric cars, and other monstrous machines that bring memories to them. Here they used a mix of acrylic and a stencil on the plate. Another interesting project from the Collective is Monstroom, which is basically focused on creating interior design and furniture. By applying the combination of modern and high-quality materials such as untreated wood, glass, and metal, they erase the line between the art and design.

The amazing stencil artwork called GRIME S0-019 made by Monstfur has won the 2015 Grand Prix Stencil Art Prize, on the competition organized by the Ambush Gallery in Sydney. Their paintings have also been exhibited at the Stroke Art Fair in Munich, alongside famous Banksy. Their art is displayed in solo and group exhibitions in places like Berlin, Warsaw, Paris, Stockholm among others.

They create all around the world.