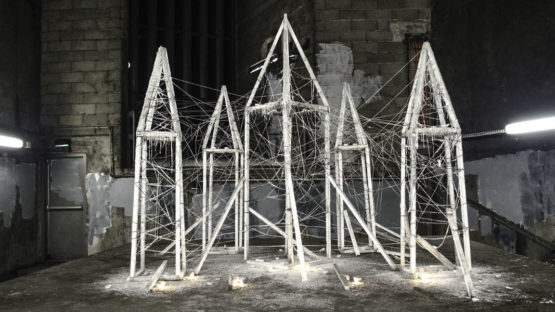 There’s a saying that a forbidden fruit is the sweetest one. Some artists follow it quite literally, seeking excitement and thrill in creating their pieces in places where they may not belong. Radouan Zeghidour is a young French artist, who places his installations in locations where possibly no one will ever see them. Well, except some errant worker, a homeless person looking for a shelter from the rain, or enthusiast exploring the forgotten tunnels. A lot of ‘detective’ work is required as the artist needs to be sure that the locations are indeed abandoned and that no one will disturb him while he composes his pieces.

The artworks are mostly made out of materials Zeghidour finds at the spot, like pallets, pipes, strings, branches, and remains of old and decaying structures. Most of the locations are not disclosed, but the artist revealed where some of the pieces were built. Désenchantement occupied a room beneath La Maison Rouge, a contemporary art space, and Radeau Échoué was based in the Paris subway. Both artworks, as well as the majority of his work, were installed without previous authorization. The locations of the installations are not disclosed until they’ve been documented and disassembled. This makes his exhibitions in galleries even more important, as viewers can finally be present physically.

The artworks are made out of materials found at the spot

Zeghidour is in constant pursuit of new potential locations for his art. It requires a lot of detective work, like placing cigarette butts in door locks, putting objects along hallways and passages, wedging various things underneath the door – and then coming back later to see if something was moved, and when. If there’s some sort of construction work around the suitable location, he tries to find out what are the workers’ hours. There is always risk involved, and the artist was once caught in a restricted area and consequently spent three days in a jail cell. On many occasion, he would simply be escorted back to the surface. Just because his process is so secretive and the fact that not too many people, if none, will actually see the finished pieces in person, Zeghidour felt the need to create a map, a one that would show where his pieces once stood. Since his work is made primarily from experiences, feelings and explorations, the map was the best way for the viewers to live an experience, rather than simply see the artwork. Mea Culpa was included in Hypogea, a Zeghiour’s first solo show that took place at the Catinca Tabacaru Gallery in New York.

Antoine de Saint-Exupery said: ‘’What is essential is invisible to the eye’’, and that could easily be the official motto of Radouan Zeghidour. Documentary evidence of the installations is released after he destroys them, and it includes both the videos showing the process and the photos of the artworks. The artist also creates paintings with the found debris, this time in his above-ground studio, and presents them to the audience.