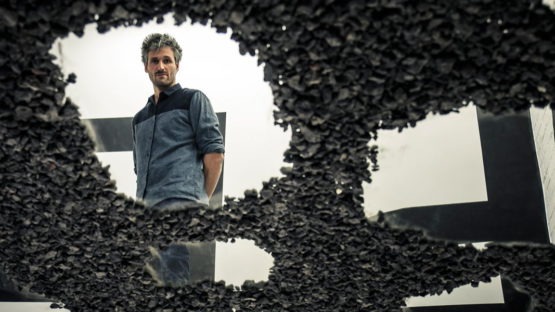 Rero is a French graffiti and street-art artist who is creating work halfway between urban art and conceptual art, while questioning the context of art as well as the codes that govern images and intellectual property with an acronym that regularly crops up in his pieces: WYSIWYG (What You See Is  What You Get).

RERO was born in 1983 and studied graphic design at the London College of Communication. RERO’s interventions within the urban and natural landscapes continue to influence his participation in the gallery setting. His pieces are found on canvas, vintage books, neon, fine china, statuesque busts, plaster walls, decaying newspapers, typewriters, flags, and much more. RERO presents these objects with his text as the image, thus provoking the sense of image negation, a continuing thread throughout his body of work. Having developed an evolving fascination with the relationship between the exterior and interior realms and the boundaries that define them, RERO has notably placed himself at the forefront of the urban conceptual experience.

Self-censorship — he strikes his slogans with a thick line — are key concepts in his exploration of the concept called image negation. Influenced by Philosophy and Sociology, Rero interrogates the codes governing our society. In particular he examines the notions of consumption and obsolescence, without judging himself and yet asking the viewer to do so. The artist questions the boundaries between privacy and what we publicly reveal, deliberately or not, consciously or not, particularly on the Web. Within a radical construction where everything has to be shown and nothing hidden, Rero ascertains the frontier between interior and exterior.

Analytical artist – to quote the Italian critic Achille Bonito Oliva – Rero focuses on the codes of our society: considering Art as an alarm system capable of awakening the collective consciousness, he intervenes in public and private spaces to provoke the contemplation of a work of art and its connection with aesthetic and moral order.

RERO’s work, while instantly recognizable from his distinctive visual style, contains within it an inherent fluidity as he explores myriad social concepts, from technology and consumerism to language and obsolescence. He continually stretches the boundaries of his artistic mediums, often choosing to forego traditional surfaces on which to plant his minimalist statements. RERO’s text, always in the same Verdana font and stripped of any flourish beyond a bold strike-through line, become embedded within the medium, acting as a literal and material addition while simultaneously a marker for deconstruction.

At the very core of his work are these concepts – the confrontation, the aesthetics of destruction and the idea of appropriation. His pieces began as site specific urban “interventions,” text placed on dilapidated and abandoned buildings, hugging the mold-ridden walls of open-air galleries filled with debris and detritus. Translated from the exterior to the interior, RERO’s most ambitious pieces are large-scale installations that make use of the art gallery or museum venue to explore notions of context and perceptions of space.

He lives and works in Paris