Da Mental Vaporz Berlin takeover is done. The large exhibition by this French graffiti crew is currently on display at two spaces of BC Gallery, while the artists have created a huge mural on a wall next to the S-Bahn station Waschauerstrasse, a new landmark overlooking the urban quarter. This impressive mural is designed by the well-coordinated crew, but it still gives justice to every individual member of the group and their respective styles. Although composed out of different fragments, the DMV wall retains the harmonious unity and the vitality of their recognizable manner. This novel piece in their joint body of work may be one of the most representative examples of the crew’s mural design, while the show at the BC gallery complements this gigantic wall and celebrates the successfully fused creativity of the DMV members - Blo, Bom.k, Brusk, Gris1, Kan, Lek and Sowat.

Their Berlin Wall is a fusion of cartoonish, macabre, ironic, linear and odd imagery, while the symbolic door to their deepest dreams and fears is present in this new, chromatically elegant, elaborate, yet coherent composition.

The Wall is completed and ready to be taken in, while The Wall exhibition is on display at the BC Gallery until May 31, 2014.

The Wall inside by DMV

The Wall is the essence, the starting and the finishing place of urban art, the focus and the obsession of the many creatives working in the open today. It’s not a new finding, as the wall has been the preferred canvas of many street artists for a long time. Contemporary art brought figures interested in the very nature of the wall, while many an artist deliberately engaged in street painting or defacing, starting from Haring and Basquiat, to Banksy and KAWS. DMV crew is not an exception. Although its member creatives work independently, together they prefer working on large scale murals, thus showing the full potential of their collective creativity. Covering wide walls, DMV artists are free to express themselves and to find the best  way to visually connect each of their styles, materializing monumental, harmonious and lively surfaces.

The Wall exhibition showcases the latest pieces executed by DMV artists, while they are all tied in a dominating mural executed out of the gallery space.

Widewalls was present at the opening of The Wall and here we bring you a bit of the atmosphere from the exhibition. 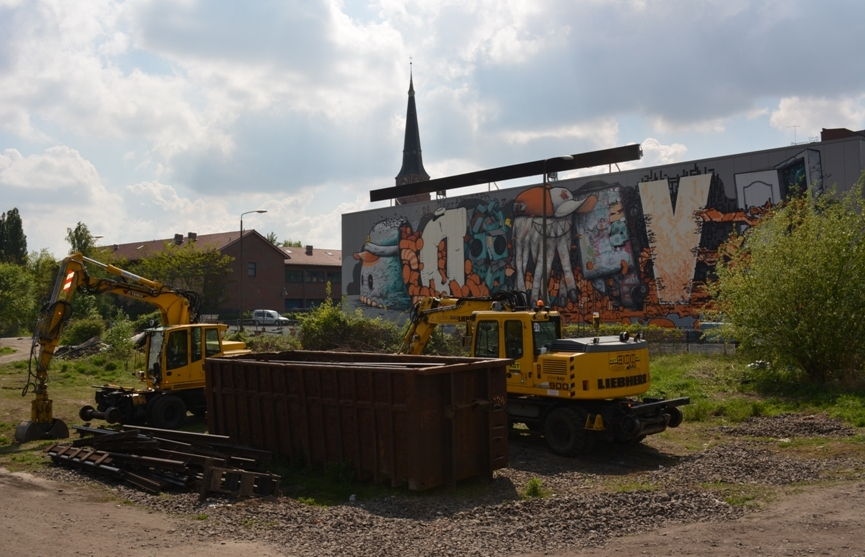 Da Mental Vaporz crew consists of ten members with monikers Blo, Brusk, Bom.k, Iso, Dran, Kan, Lek, Gris1, Jaw and Sowat. All of them have been active members of the French graffiti scene for years, developing particular styles through subject selection and aesthetics. Their techniques in painting and spray painting vary, while together, the ten prefer to work on the large scale. The larger the better. Following their initial premise which helped coin the name of Da Mental Vaporz crew, the artists of this psychologically aware collective are dedicated to opening up the doors, or trapdoors even, to the deepest wells and the most hidden corners of human psyche. Every one of these pondering urban creatives conjures up a separate fragment of a piece, helping assemble a rich, multilayered, recognizable style. The group references and celebrates the important movements of the 20th century art, without emulating too much any one in particular.