Subway has been one of the initial places where the first New York graffiti writers developed their styles; even Keith Haring was famous for his subway drawings. Swarming with commuters during the day, while being completely deserted at night, subways of megapolises can also be treated as metaphor of modern society, including every stratum, every aspect of its pertinent culture, intertwined with personal and collective views, alienation and fluctuations of humanity. Fusing the romantic notion of subway travelers with street art, Elbow-Toe delved into exploration of psychological drawing, finding his ideal subjects around the subway trains. His ongoing exhibition at R. Jampol Project(s) is entitled Liner Notes, presents the artist’s subway sketchbooks and drawings on objects, which span from his early artistic days to present. 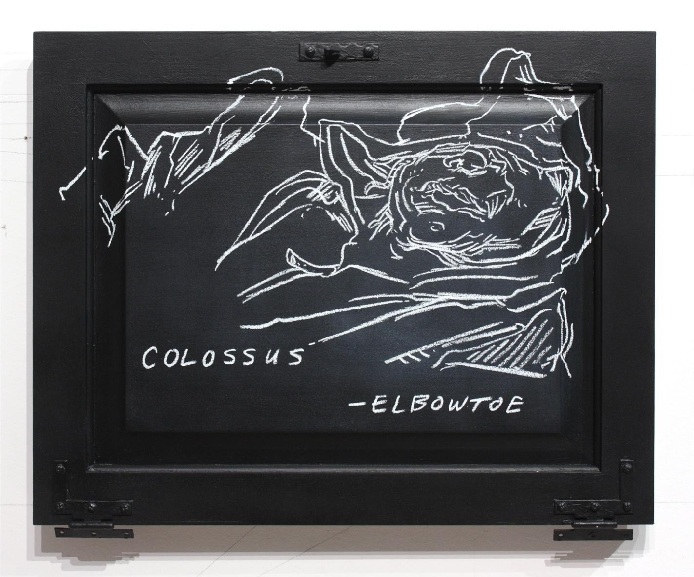 Elbow-Toe is the moniker of Brian Adam Douglas, a Texas-born, Brooklyn-residing artist, whose multidisciplinary practice encompasses various media, from large-scale woodcuts, to drawings, collage and stencils. Douglas’ street art is what got the artist noticed and acclaimed, excellent in drawing, bold in color, emotionally striking. His style is figurative, puzzling, frequently executed on paper - a trait inherited from his street art beginnings. Widewalls Collestion holds a piece by Elbow-Toe as well. Over the past several years, Elbow-Toe had several successful shows, such as Due Date at the Warrington Museum in the UK and the Black Rat Projects. His paper-bound artwork was presented in a printed catalogue Paper Cuts in 2011, published by Drago. A little over a year ago, Douglas won critical acclaim with How To Dissappear Completely at Andrew Edlin Gallery in New York. Liner Notes is the first time the artist showcases his sketchbooks in public, curated by Amy L. Young, and followed by a catalogue text by Hrag Vartanian, cofounder and editor-in-chief of Hyperallergic.

I have always found the subway to be one of the most private places in the city, said the artist, implying the state all passengers find themselves in, briefly escaping the daily crazyness of the urban life. Relaxed, even only for a little while, people on subway emit a particular energy, allowing the observers to get a glimpse of their true characters. Sitting on the train, Elbow-Toe made use of his time with drawing studies, employing distortion and exaggeration in order to unveil the true nature of a person he draws, usually the one sitting directly across from him. Although the train is decidedly public, the space the artist and the temporary model share can be seen as intimate, extracting the most from the draughtsman in terms of concentration and technical proficiency. Both of the people involved in the drawing process are therefore vulnerable, the opened-up sitter, and the empathic artist, while the result is usually a brilliant sketch.

Sketchbooks and Drawings in Exhibition

For the artist, the drawing process is a sincere act. The same goes for the act of showing his personal sketchbooks in public, with all of the errors and imperfections they contain. Inspired by the essential, honest closeness, the artist commenced translating these drawings onto doors around the city. Objects showcased at Liner Notes exhibition demonstrate the drawing capacity of Elbow-Toe entirely, as well as his profound affinity for the subject. Liner Notes opened on October 17, with a reception on the next day, and it will remain on view at R. Jampol Project(s) through November 2, 2014.

Elbow-Toe's sketchbooks are much more classical, not referring to the graffiti sketchbooks, called Black Books.