10 Famous Pattern Artists You Must Know

All pattern artists have one thing in common – they all use patterns in their art. The medium or technique is not important; as long as someone employs a combination of elements or shapes repeated in a recurring and regular arrangement, he or she can be described as a pattern artist. Of course, to describe someone like that means that the creator uses patterns in a vast number of their works. There are so many such famous Modern and Contemporary artists, but only those who create a large number of artworks characterized by these designs composed of repeated motifs can be labeled as pattern artists.

Patterns are usually associated with design, and indeed here is where they play a very important role. When it comes to art, patterns have been used from ancient times. They exist in nature – the repeating units of shape or form can be identified in the world that surrounds us. In art history, patterns have been used from Ancient Greece to the contemporary era. In the 20th century art, there were movements and groups who embraced this technique, such as Art Nouveau, simply because they wanted to incorporate natural settings into the world of art and architecture (including natural geometry).

There are movements whose “philosophy” and approach is a priori against the use of patterns. For example, minimalist art or conceptual art by definition do not embrace repetition as a method. Still, even within these movements, it’s possible to identify pattern artists, and their names will appear on this list. Simply, patterns have a rich history in art in general, and they cannot be ignored. From Ancient Times and Islamic Art and Architecture, patterns always have had an important role as a form of decoration, repetition, and rhythm. That is why many contemporary artists use this style in their practice.

The book Principles of Pattern Design is both educative and illustrative. Written by Richard M. Proctor, the book contains 280 illustrations depicting historical and contemporary examples of pattern, many adapted from such diverse sources as an ancient Peruvian stone amulet, 12th-century mosaics, 13th-century damask, Japanese stencil designs, and much more. The book is also illustrated manual of the principles of pattern formation and their application to design and decoration. Decorative samples appear in macramé and embroidery, mosaics, painting, collage, sculpture, and on wrapping paper, and a concluding chapter explores the visual range of one particular motif — the Romanesque arch form. It can be useful for teachers, students, designers, and craftspeople, but also for art lovers as well.

Scroll down and take a look at famous pattern artists whose work you have to know!

William Morris - One of the Pioneers of Textile Design

Apart from being a prominent socialist activist and poet, William Morris is also known as a renowned textile designer who was associated with the famous British Arts and Crafts Movement. Morris is a famous name in the world of wallpaper and textile design, and his oeuvre paved the way for the use of pattern in art. Morris lived in the 19th Century, and in the 1860s he slowly abandoned painting and focused on designing wallpaper art patterns. Morris's wallpaper and textile designs were embraced by a number of craftsmen associations and prominent designers, and he can be seen as one of the first pattern artists ever. The artist's designs are in production even today.

Owen Jones was a prominent Welsh architect from the 19th Century. He is best known for his studies of Islamic decoration at the Alhambra (famous fortress in the Spanish city of Granada). While researching Alhambra, Jones developed theories on the flat pattern art, geometry and polychromy. He was not only theoretician though - Jones also used his theories of art patterns in practice. As one of the most prominent pattern artists, he designed books and worked on other printing projects. In addition, he worked on a vast number of decorative designs that were later used in the production of furniture and other fittings.

Paintings by famous Austrian artist Gustav Klimt are, among many other things, known for the use of patterns. Actually, some of Klimt’s most famous paintings were created by adopting the style that was ornate, elaborate and decorative. Apart from famous gold leafing, the artist also often used bright patterns in order to illustrate exoticism and even eroticism. The patterns Klimt used were inspired by Byzantine, Greek and Egyptian art.

Anni Albers (Annelise Albers) was an American textile artist and printmaker. Born in Berlin in 1899, she was educated at Bauhaus in Weimar, where she met prominent Bauhaus artists. Once she moved to the United States, she began creating mass-producible fabric patterns. The majority of these patterns are still recognizable for Albers’ "pictorial" weavings.

Take a look at an interesting selection of textile works on Widewalls Marketplace!

It’s time to present some contemporary artists who use patterns in their art. One of them is Fred Tomaselli, American contemporary artist best-known for highly detailed paintings on wood panels. This artist renders abstract patterns, human figures, and natural forms, using quite unusual materials such as prescription drugs, hallucinogenic plants, and cuts from books and magazines. He is based in New York City.

Daniel Buren is one of the most prominent French conceptual artists. His art is often described as radical – he rejects the idea of painting as an object and refuses the idea of authorship. Buren is best-known for his installations, where he uses vertical stripes. Under heavy influence of French postmodern philosophy of the 1960s and 1970s, Buren applies patterns in his installations and other works aiming to deconstruct the idea of space and time.

Damien Hirst, one of the leading contemporary art figures of our time and a member of the Young British Artists (YBA), also uses patterns in his art. Of course, Hirst’s oeuvre is not only about repetition of regular arrangements, but many of his famous works are known for use of patterns. Hirst’s well-known Kaleidoscope paintings are composed of thousands of butterfly wings that are placed in intricate patterns reminiscent of stained-glass windows.

Sarah Morris is an American contemporary artist who lives and works in New York City. She explores urban environment and creates works in which she plays with architecture, colors, forms, and psychology in order to associate an artwork with city the work is about. In many of her works, she uses sign patterns, as she focuses on power and signs structures that are embedded in cities’ architecture. Her Origami series raised a lot of controversy, since she was sued by a group of six origami artists for copying their original crease patterns.

One of the most recognized Moroccan artists, Lalla Essaydi, is known for her staged photographs of Arab women. Those images she covers with a loose rendering of Arabic script. Also using calligraphy in her attempt to deconstruct the stereotyped imagery of Arab women, Essaydi applies, what appears to be, Orientalist patterns when she covers the images of women she depicts.

Yayoi Kusama has always been interested in psychedelic colors, repetition and pattern. Based on these thematic interests, this famous artist creates paintings, installations, collages. Patterns play the enormously important role in Kusama’s art. In describing her painting titled Flower (D.S.P.S), Kusama said: "One day I was looking at the red flower patterns of the tablecloth on a table, and when I looked up I saw the same pattern covering the ceiling, the windows and the walls, and finally all over the room, my body and the universe. I felt as if I had begun to self-obliterate, to revolve in the infinity of endless time and the absoluteness of space, and be reduced to nothingness. As I realized it was actually happening and not just in my imagination, I was frightened. I knew I had to run away lest I should be deprived of my life by the spell of the red flowers. I ran desperately up the stairs. The steps below me began to fall apart and I fell down the stairs straining my ankle". 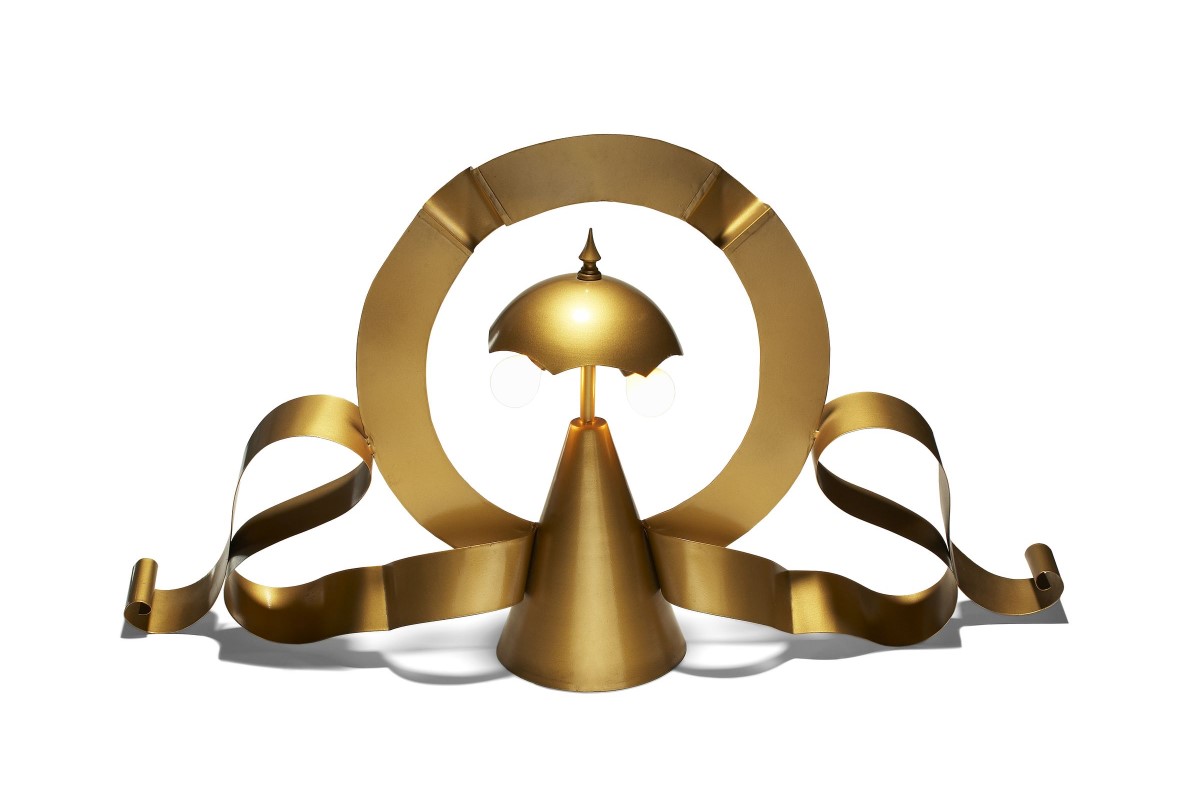 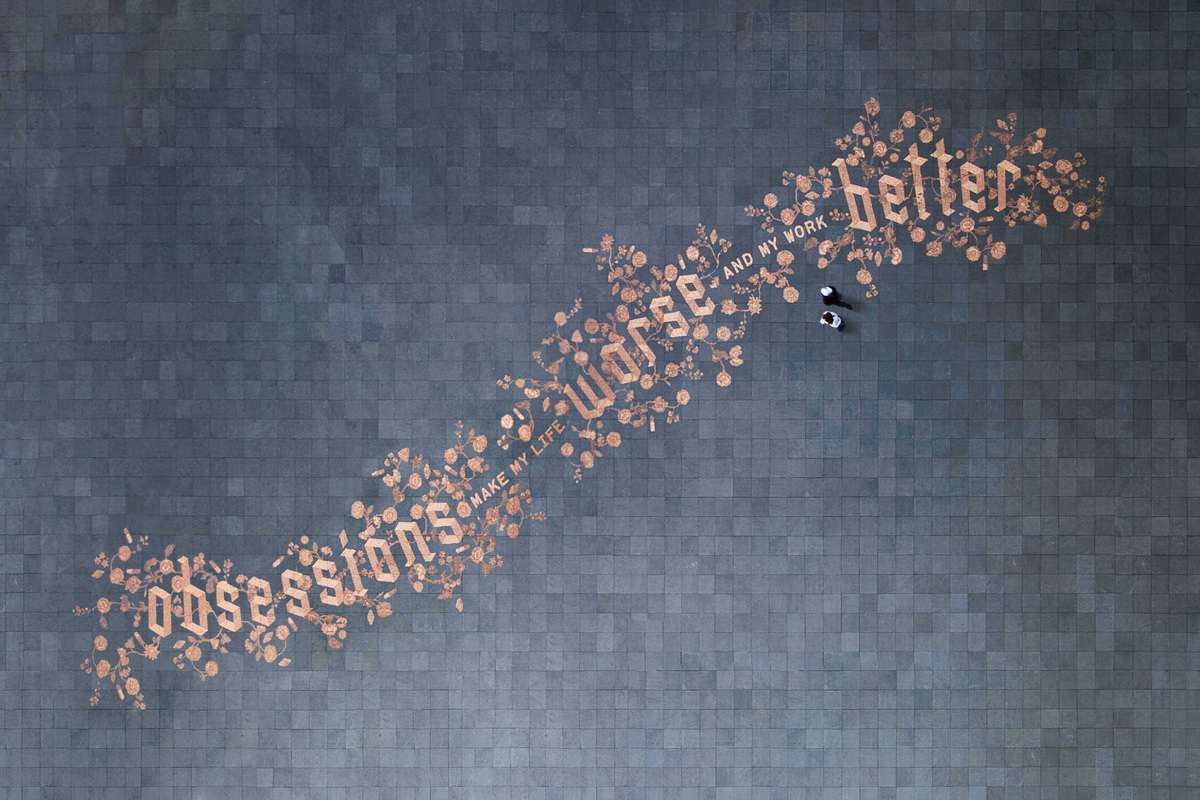