Elements of nature such as animals, trees, and flowers served as prolific painting motifs for centuries. Depending on the time period flower paintings often carried either mythological, religious or medical meaning. In ancient Greek tradition, for instance, carnation represented symbols of love while ivy embodied marital fidelity in middle ages. The long tradition of flower paintings extended to the modern era and botanical elements found its place in almost every art genre that followed.

Production of flower paintings particularly flourished in the fifteenth and the sixteenth century when first painters specialized in botanical imagery appeared. Artworks from this period had high decorative properties but also the symbolic undertone that gave the artworks philosophical connotations. Holland has a particularly long flower painting tradition. From realistic art bouquets created in the 19th century to the colorful untamed sunflowers by Van Gogh, some of the most famous and most loved flower paintings come from the "land of tulips".

In the 19th century, Claude Monet created his celebrated water-lily painting series that powerfully captures the constantly changing qualities of natural light in spring, summer, winter and fall and evoke the kind of meditative state that hypnotizes the viewers while observing the artworks. Finally, vivid close-ups by Georgia O’Keeffe and Marc Queen pull the flowers out of their natural surroundings to bring the viewers attention to the beauty of the colorful blossom and the unique singularity possessed by every specimen.

You don't have to be a botanist to paint flowers beautifully. Rather than produce anatomical flower paintings, it's far more important to capture the quality, the feeling, and the spirit of the flowers. In this book, Reid turns his skillful eye and helpful teaching methods for painting flowers in acrylic and oil paints. Apart from a detailed discussion of materials and palettes, you will learn a bit about flowers and flower parts in general, as well as painting techniques like drybrushing, scumbling, and pointillism. Then, with plenty of examples and guided assignments, you will learn to paint a wide variety of leaf forms before moving on to specific flower design and arrangement. As the chapters progress, you'll learn to properly mix values and colors for specific effects; compositional lessons about boundaries, lessons on subject placement and horizons; and how to use edges, lighting, and patterns.

From complex 17th century floral composition to fascinating rose oil painting by Alex Katz and Marc Queen, we present you with a bouquet of flower paintings that will make you rediscover your love for the many colors and shapes of nature.

Ambrosius Bosschaert was one of the first artists who specialized in flower paintings. He was one of the pioneers of painting highly detailed flower arrangements, usually depicted vivid, and realistic bouquets of pink tulips and roses. His realistic floral artworks were usually painted on copper, very symmetrically and with almost scientific accuracy. The painting we presented depicts a white rose, a pink carnation and a yellow tulip in front of a basket of vividly colored flowers. The striking painting symbolizes a brief existence of picked plants and its fleeting beauty but also an array of short-lived insects that share the same destiny.

In mid-1600 tulip bulb became hugely expensive, so painted pictures of these beautiful flowers became a convenient and cheap substitute for the real specimens. The high demand for specialized tulip catalogs encouraged painter Judith Leyster to create a flower book of her own. Though she is mostly famous for her stunning portraits, the Dutch artist could paint still life imagery and beautiful flowers just as well which she proved with this fantastic series of works.

One of the original founders of American Impressionism Mary Cassatt frequently painted elements closely related to home life. Though her paintings usually depicted the human figure, flower bouquets and gardens also found their place in her art pieces. This aubergine vase that's filled with white and purple lilacs bouquet is painted next to an open window most likely located in a greenhouse near her studio. This painting of colorful flowers represents a wonderful example of the artist's angular fluency and skillful academic painting style.

Sunflowers are the main topic of two separate series of Van Gogh's oil on canvas paintings and one of the most common motifs in the famous Dutch painter's work. This particular painting entitled Still Life Vase with Twelve Sunflowers belongs to his Arles painting series created in 1888. He painted a total of four versions of this vase and this last version was reworked by the painter to feature additional flowers. So, even though it carries the title Still Life Vase with Twelve Sunflowers, this particular painting features a total of 15 flowers.

One of the most famous and most loved flower painting series in the history of art is definitely Claude Monet's stunning Water Lilies series. Depicted as a wast, almost endless water surface, these paintings show Claude Monet's flower garden at his home in Giverny. The painter was attracted by the water plant's ability to reflect sunlight which is why he created a series of paintings showing the transformation of the flower and the surrounding pond at different times of the day and various seasons of the year. His water lilies ranged from figurative to abstract thus opening a door for further abstraction in painting. Finished in 1919, this particular painting was signed and sold by the painter himself while many other pieces from the same series remained unfinished.

Throughout her career, Georgia O'Keeffe created over 200 exceptional flower paintings. The artist who have worked primarily in watercolor till 1918, turned almost completely to oil on canvas painting and shortly began to create large scale floral forms at close range, as if they were seen through a magnifying glass. This striking Red Poppy painting dating from 1927 is a perfect example of Georgia O'Keeffe close-ups. The fascinating large-scale painting is marked with vibrant red and orange tones that pull the viewer directly into the artwork. In 1992 the US post office decided to pay tribute to the grand art figure by making a series of stamps based on this very painting.

When expressionist artist Emil Nolde and his wife moved to the German state of Schleswig-Holstein they were immediately captivated by the colorful gardens in the area. These fields packed with yellow rudbeckia, jewel-like geums and dahlias, and bright pink roses drastically changed the way Emil Nolde painted. From there on, he started painting numerous oil on canvas flower pieces with powerful and emotional splashes of striking paint and watercolor. His celebrated Peonies and Irises painting wonderfully portrays the beauty of the modern garden.

Famous pop artist Andy Warhol often turned to flowers for painting inspiration and depicted a variety of species ranging from white daisies to Japanese ikebana. His 1964 flower painting series is particularly striking as he used innovative technique and vivid colors to highlight the floppy shape of hibiscus flower.

Check out an interesting selection of works by Andy Warhol!

Though accompanied by a controversy, as the photographer whose work served as a base for the flower series tried to sue, this painting series continued to blossom for the next 20 years. During these two decades, Andy Warhol created numerous floating flowers in different color schemes and with various levels of abstraction including the 1970 acrylic and silkscreen ink painting entitled Flowers.

American artist Alex Katz is known for his examination of the three-dimensional space with his simplified portrait and landscape imagery. The first time he created a flower painting was in the late 1960s when the artist depicted extreme close-ups of singular flower. In the early 2000s, he began to paint flowers in profusion and create artworks similar to his 1960s pieces. In 2001 the prolific painter covered large blue canvas in rose blossoms to create one of his finest floral artworks entitled Red Roses with Blue.

Marc Quinn - Radioactive Nurseries of Enceladus (in the Night Garden), 2010

Captivating and colorful flowers are a recurrent motif in the artworks of Marc Quinn as well. British art-maker portrayed all kinds of flowers including irises, sunflowers anthuriums, and orchids. His fascination with flora begun in the year of 2000 when he created his famous Garden installation packed with numerous frozen flower sculptures. But, Marc Quinn also made a series of flower paintings and drawings, one of which has found its place on our list. Radioactive Nurseries of Enceladus (in the Night Garden) painting is a hyperrealistic representation of strawberries and striking flowers in full bloom. The painting simultaneously depicts the artist's desire to save the environment and the human need to control it.

Featured image: Marc Quinn - Radioactive Nurseries of Enceladus (in the Night Garden) via marcquinn.com; All images via Wikipedia unless otherwise stated 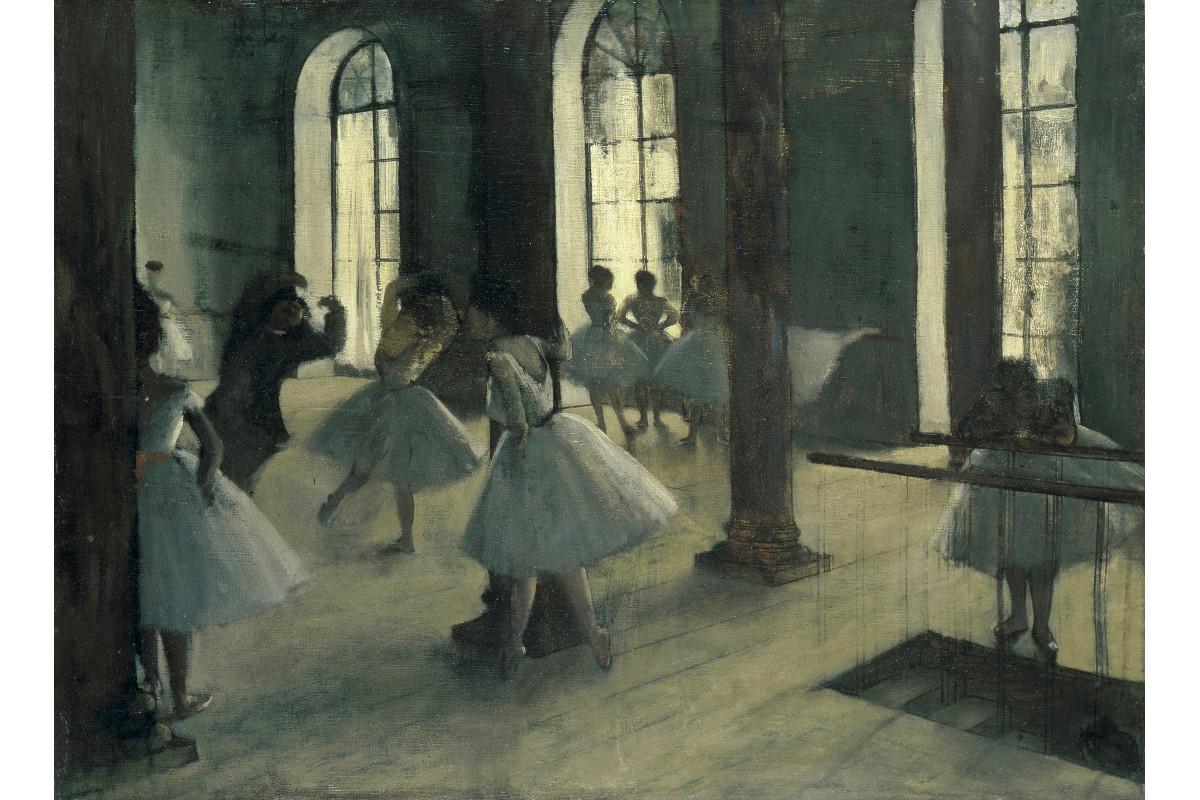 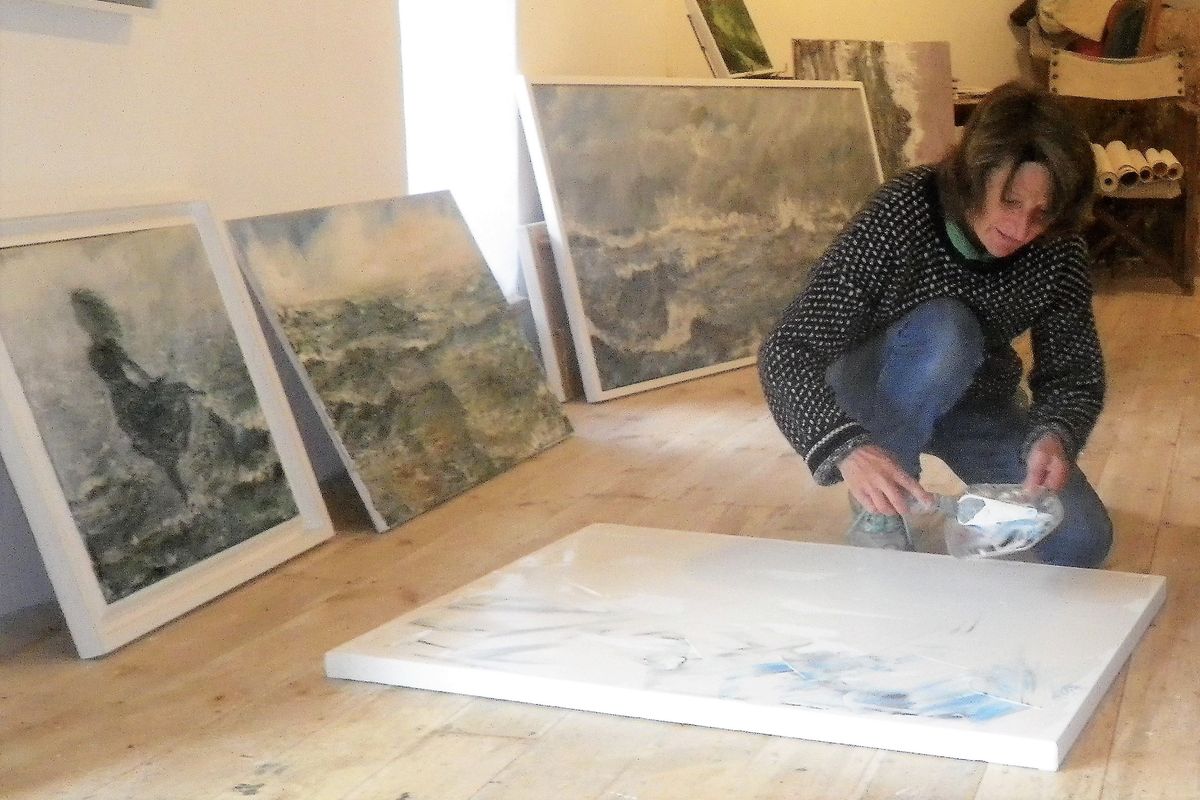 In an exclusive Widewalls interview, artist Penny Rumble talks about the inspiration she finds in the sea, her working process, and much more.