Are the food artists doing anything new? Apart from being our daily fuel and providing nourishment, food has a long tradition in art. It was found in the paintings from Ancient Rome and Greece, as well as on the walls of the pyramids in Egypt. Food is often a subject of still life painting, so as of contemporary still life photography. Renaissance brought still life objects into paintings of religious themes, and the following centuries were the time of scientific researchers that pushed the artists even more towards the detail depictions of inanimate objects – including, of course, food. From the luscious paintings of food by the Dutch realists through the pop-art depictions of can(s) of Campbell soup, we could argue that food was (and still is) a big part of artistic practice as we know it. Through analyzing depictions of food in art, we can learn a lot about a certain age. Nowadays, food also has a major role in our overwhelming visual culture: social networks are swamped with photos of meals and fresh produce each day, chefs, restaurants and food photographers have a great following on Instagram, and high-end restaurants are trying to change the way we look at plates. We expect our food to have color and textural contrast and to be accompanied by a story – but, if our food is now an art form, is there still food (in) art? Undoubtedly so. Where idea meets craftsmanship and the technological advance meet artists’ perception of the medium, food can be used both as a raw material and a way to communicate a certain message. This list covers both ways of using food and highlights five artists with distinctive but different approaches to food art. Some of them are full time food artists. The others use food in one part of their body of work in order to convey specific ideas. Some of their art will make you hungry, and some of it will make you question yourself. It’s legitimate either way.

If you found the idea of food as a medium for making amazing artwork interesting, this book may quench your inquisitiveness and hunger (yes, pun intended) for more of this type of art. In 1996, the authors Joost Elffers and Saxton Freymann have introduced Play With Your Food, a never-before seen collection of photographs that depict playfully carved vegetables and fruits. The book was sold in more than a million copies and earned the authors an award-winning series, and proved that food is not just fuel for the body, but something you should play with and enjoy. Their book Food Play is a volume that compiles over 300 of the best of the best images regarding the playful ways people arrange and use food for art.

Vinegar, knives, a miniature drill – and a crafty pair of hands. Sometimes a bit of paint sounds humble, but the famous French artist Christel Assante doesn't need anything else. The french artist started carving eggs as a hobby. This fragile medium in her hands turns into stunning artworks. She finds their oval shape perfect for the scenes that evolve as you turn it around. Want to know a secret? She doesn't carve chicken eggs because they're way too fragile. Instead, Assante carves nandu, duck, emu, goose, quail and pheasant eggs – but that doesn't make her art any less stunning.

Dan Cretu is an artist from Romania who makes elaborate food sculptures and photographs them in the appealing visual style, referencing visual codes of pop art and at the same time resonating with contemporary commercial photography fit for the vast number of social networks. His mission as an artist is to turn everyday objects we don't even think about nowadays into something organic and alive. Bright colors that make his work eye-catching are sourced from fresh ingredients Dan Cretu uses. Since Cretu has started posting the colorful food sculptures to social networks, his work was commissioned by the Pizza Hut restaurant chain to promote their in-house salads. The artist doesn't work only with food, but his body of work exhibits a coherent style.

The Art of Stains: Wine Portraits by Amelia Fais Harnas

What do you do with a red wine stain? Some say you're supposed to wash it with white wine, but Amelia Fais Harnas prefers to turn it into a portrait. The artists tame the perceptibly uncontrollable medium – wine stains – by using a wax-resist dyeing technique. Afterwards, Fais Harnas uses embroidery to accent specific lines. The technique doesn't require much wine – the artist usually spills one glass per portrait. The final image is a result of both control and chaos, and using the unpredictable medium helps the artist to paint the unpredictable nature of human character. The portraits require keeping in certain conditions, just like wine itself.

Painting With Food: the Art of Detail by Anna Keville Joyce

Food stylist is an occupation we hear of every so often. The art of arranging food, especially for commercial photo shoots, has its narrowly defined application but many wouldn't actually consider it art. However, there are food stylists that also branch out into art, and Anna Keville Joyce is one of them. Often deemed one of the best food artists there are, she is responsible for several different projects. With the photographer Lucas Zarebinski she has explored food as a source of energy. She is, however, best known for her food paintings – in this case, that means the paintings created with food. For something two-dimensional as a plate can be, her creations are great in depth and amazing in color. Taking food styling to a whole new level, her work is vibrant, highly detailed and also personal. She started the series of food paintings featuring birds when her pet bird died, as a way of coping.

Ok, Maciek Jasik is not a food artist, but he has given a surreal twist and an unexpected turn to food photography we know. The Polish-born, New York-based photographer has created The Secret Lives of Fruits and Vegetables, the series that reconnects foods with their long lost mystical properties. The series relates to his work with human subjects, which he photographs in a surreal manner, and brings a breath of fresh air in a setup that would be pretty boring otherwise. His still life photographs of fruits and vegetables are eerie: the food is punctured and it emits thick colored smoke. The smoke compliments the color of the fruit but at the same time, it doesn't quite relate to the notion we have regarding the food's color and taste. These photos seem out of this world and strangely familiar at the same time. 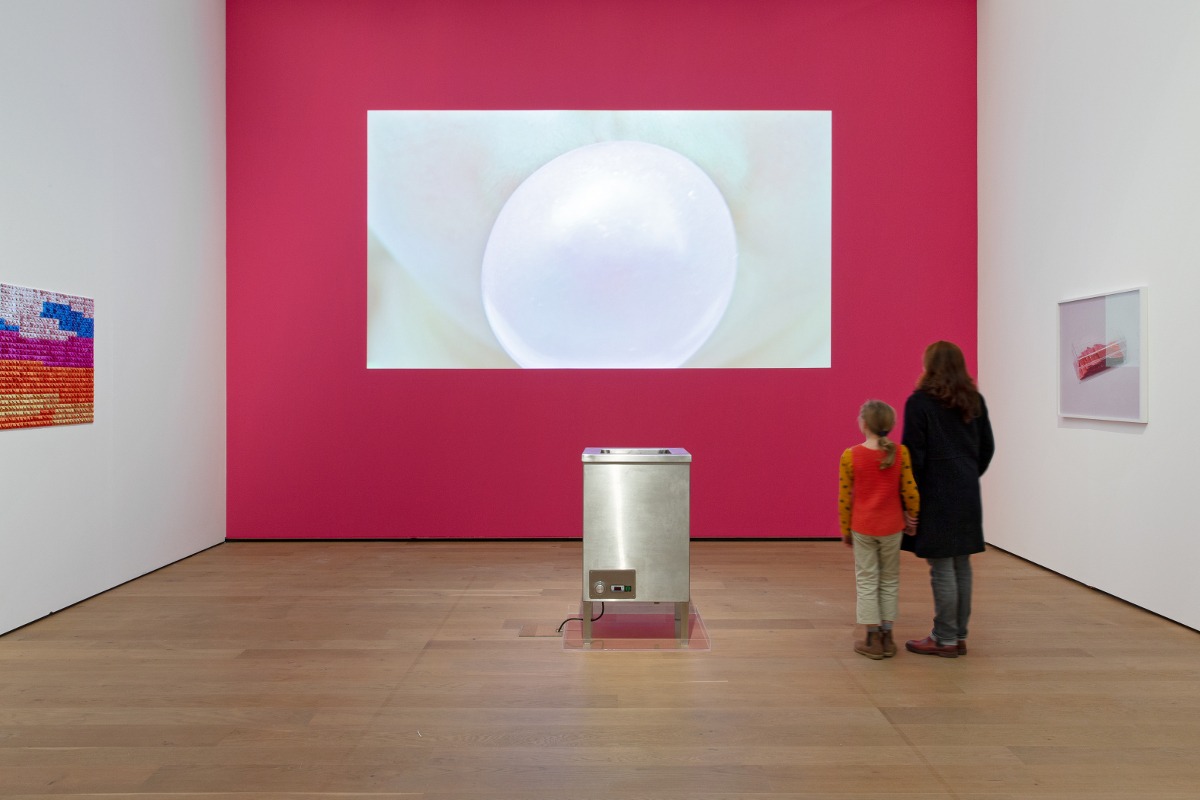 What Does Art Taste Like? Find Out at Museum Tinguely
Exhibition Announcements   |   Balasz Takac

Currently on display at Museum Tinguely is a group exhibition exploring the notion of taste through visual arts spanning from Baroque to present day.