The Fascination with Food in Art History

As a cornerstone of our very existence, food has always played a significant part in our social and cultural lifestyles. Thus, it is no wonder that the depiction of food in art spans across cultures and all of recorded human history. Appearing in myriad contexts, this practice stretches back to ancient Greece and Rome where banquets and bacchanals were consuming passions celebrated in literature, painting, and mosaics. Drawings of food could also be found inside Egyptian pyramids. Created on inner walls of burial chambers and on coffins to depict all of the good things waiting for the deceased, it was believed that those drawings, through magical properties, would nourish those gone on to the afterlife. A recurring theme through the Middle Ages and Renaissance to modern times, food has been depicted as a celebration of a theme, composition itself or a metaphor. Whether serving symbolic purposes, being an allegory for certain virtues or values or emphasizing eroticism, exoticism or wealth, these depictions were often used to reveal something else. Since food is interwoven with most aspects of our lives, this comestible art history also connects with larger themes such as politics, gender, religion, or class.

In the fifteen century, artists took increasing inspiration from the culture of antiquity and from the natural world and began depicting a variety of still life objects in both devotional and secular images. The food was the primary source of inspiration, and with these still lifes, painters tried to freeze a point in time in the most realistic perspective, but also display a virtuosic skill of observation and description of color shape and texture. While some canvases represent the feast as an extravagant display of pleasures, some others appeal to sobriety and abstinence. More than often, food carried a symbolic meaning or an allusion to the painting’s subject. Representing certain features, virtues or values, this symbolism of food and drink was mainly rooted in classical literature and paganism.[1]

The Still-Life Painting as a Genre

By the seventeenth century, the art world became interested in the scientific examination and still-life painting flourished as an independent genre, particularly in the Netherlands, Italy, and Spain. As one of the most popular subjects, the food was depicted with exquisite realism and detail. In the forefront were the Dutch and Flemish masters who depicted abundant and lavish food displays such as game, fowl, lobster, shellfish, exotic citruses or precious grapes. These expensive delicacies were associated with a privileged lifestyle that the owner of the painting wanted to be identified with. Yet, this imagery sometimes also served as a reminder of transient nature of luxury or the perils of gluttony. On the other hand, Vermeer took a different route than his Dutch contemporaries. In his famous painting The Milkmaid, he used expensive pigments, rich colors, and exceptional lighting to paint the most common of foods - milk and bread. The symbolic potency of this kind of imagery lived on into the eighteenth century, even as the popularity of genre painting waned in the Netherlands.[2]

The Food and the Real Life

By the end of the 19th century, artists started conveying moments from the real life. They depicted people socializing around food or humble people like peasants and farmers eating their simple meals, such as Vincent van Gogh in his painting The Potato Eaters from 1885. Other modernist painters like Cezanne used the still life genre to advance ideas about what modern art could look like. His still life illustrations are viewed as a mixture of both traditional and modern – while the fruits and vegetables in his pieces are easy to identify, they appear as  decorative items. Some other impressionist artists depicted harmonious scenes of collective dinners, all in subtlety, refinement, and delight, revealing the social aspect of food. In pieces such as Manet’s The Luncheon on the Grass or Renoir’s Luncheon of the Boating Party, enjoyable indolence is palpable and the food is presented as a central element of the scene.

Depiction of Food in Modern and Contemporary Art

In the 20th century, still lives followed the neo-dada, cubist and abstract expressionism trends and became less figurative. Artists deformed lines, juxtaposed the planes, removed the depth of field, reinvented color, and food lost its shape and flavor. They also wanted to contemplate the changing nature of society and food became an excellent subject matter to comment on it. Edward Hopper’s painting Tables for Girls from 1930 comments on several Depression-era issues such as money, hunger, gender, and class. The scene shows two patrons eating out, something not everybody could afford at the time, and a cashier and a waitress, both women in new roles outside the home. 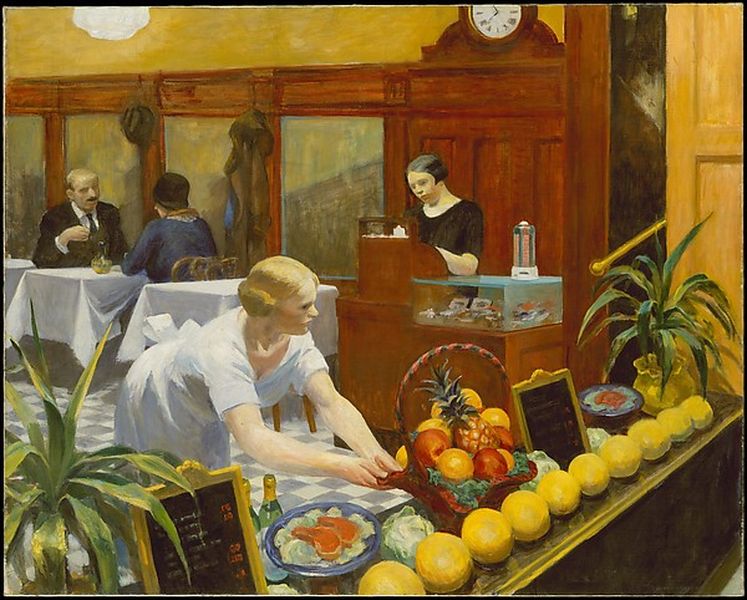 The Food in the Consumerist Society

With the economic development and the arrival of consumerism in the mid-twentieth century, pop artists started introducing regular everyday objects into high art. Often seen as a critique of consumerism and consumer culture, images featuring mass-produced food have been a mainstay of contemporary artists all around the world. Warhol criticized the rise of a homogeneous society through his 32 Campbell’s Soup Cans from 1962 placed next to each other in a linear, monotonous continuity. Lichtenstein’s Still Life with Crystal Bowl from 1973 appears surreal, as if the fruits in the bowl were cut off a magazine or a comic book, completely fake and unsubstantial. Wayne Thiebaud's paintings of cake counters embodied an optimistic spirit of never-ending prosperity. Photorealistic painters such as Ralph Goings made fun of the advertising technique. By choosing an intense lighting and augmenting the color contrast, he made the food looks like plastic, completely unnatural.[3]

With the emergence of the new movement called Eat Art in the 1960s, the food came out of the canvas and became a material just like paint, pencil or paper. The food was used in a variety of ways to create ephemeral art. In order to highlight the social connotation of sharing food and take the banality of it to the realm of high art, the artist Daniel Spoerri created tableaux-pièges by leaving food leftovers on the table and fixing them with a special spray so that it could stick to the napkin and be exposed on the wall. Jan Sterbak created a dress out of sixty pounds of raw flank steak entitled Vanitas: Flesh Dress for an Albino Anorectic in order to make a visual statement about food and humanity. The Brazilian artist Vik Muniz often borrowed images from classical European paintings and rendered them out of chocolate, caviar, or spaghetti. The Thai artist Rirkrit Tiravanija has used food in a more performative sense. In the 1990s, he would organize staged happening where he would cook Thai food and feed everybody who came to the gallery. In this way, the food became a medium for social interaction, and attendees eating and socializing became active participants in the artwork.[4]

The Food as Life

Food in its many forms, from creation to harvest or capture, to preparation, to consumption is a dominant factor in our lives. From Bacon’s Figure with Meat where a raw animal carcass is used to stimulate the olfactory senses to artists like Kara Walker who created a sugar-coated female sculpture that touches upon globalization, imperialism, and slavery, the ability of food to create cross-cultural dialog or serve as a tool for a social commentary remains prevailent in contemporary art. Food imagery is recreated over and over again in countless compositional interpretations, and no doubt it will remain so as long as both art and food exist in the world.

Editors’ Tip: Food in Art: From Prehistory to the Renaissance by Gillian Riley

From Giuseppe Arcimboldo’s painting of the Holy Roman Emperor Rudolf II as a heap of fruits and vegetables to artists depicting lavish banquets for wealthy patrons, food and art are remarkably intertwined. In this richly illustrated book, Gillian Riley provides fresh insight into how the relationship between humans and food has been portrayed in art from ancient times to the Renaissance. Exploring a myriad of images including hunting scenes depicted in Egyptian Books of Hours and fruit in Roman wall paintings and mosaics, Riley argues that works of art present us with historical information about the preparation and preservation of food that written sources do not. Looking at the many connections between food, myth, and religion, she surveys an array of artworks to to understand whether our perception of fruit is skewed by their symbolic meaning.
References: