The Most Expensive Francis Bacon Paintings at Auctions

It was November 12, 2013, when one of the Francis Bacon paintings was sold at auction in New York setting the world record as the most expensive piece of art sold at auction (you probably know which piece we are talking about, but we are not going to reveal it in the introduction). Bacon became a star (although he died in 1992); however, this a bit unexpected sale that broke all the records put Francis Bacon at the list of the most popular contemporary artists of our era. This sale raised a lot of controversies though. Marina Abramović said in one interview:

When Francis Bacon’s “Tryptic” was sold for $127 Million, it’s incredible to talk about this. How could you possibly ever see the painting without seeing the money in front?

Marina might be right, but that is the question about the prices at the art market. Here, we want to focus first on some famous Francis Bacon paintings (regardless of the price they were sold for), and on his quite unique style and approach. Of course, we have to mention the fact that Picasso’s Les Femmes d'Alger ("Version O") was sold for $179.4 Million a year later, setting a new record.

Francis Bacon's paintings are usually “classified” as figurative paintings, while his most famous paintings are known for bold and even grotesque imagery. Bacon's paintings were often created in the form of diptychs and triptychs thus reflecting the artist’s belief that images should be seen "in series" and not in singularity. Many consider that Bacon’s art was largely influenced by his private life. In the beginnings of the 1960s, Bacon met George Dyer with whom he had fallen in love. Infatuated, Bacon chose Dyer as a recurrent subject of his works in the 1960s (some of the most notable ones). The death of his lover led to a different approach by Bacon, which would eventually lead to a more reductive artistic approach, which culminated during the 1980s. But, in this article, we are not focusing on Francis Bacon's unique art, and his life, but on his paintings. We want to see what are the most expensive Francis Bacon paintings sold at auctions. There are many of them that were sold for huge amounts of money, but, let’s focus on the ten most expensive artworks by this great British artist.

Be sure to check out works by Francis Bacon on our marketplace!

The art of Francis Bacon largely depended on his private life. The book that is titled “Francis Bacon: Five Decades” perfectly draws a parallel between the artist’s practice and his private and love life. This generously illustrated monograph opens with the fecund period, then traces subsequent periods of exceptional artistic output, decade by decade, through the end of Bacon's career. Gorgeous color illustrations allow readers to study the artist's darkly expressive palette and powerful imagery through his series of screaming popes, portraits of friends, mourning triptychs, scenes from Greek mythology, and, finally, self-portraits inspired by an awareness of his own mortality. Thought-provoking essays provide further insight into Bacon's world both within and without the studio. The volume includes a wide range of photographs and archival material.

Scroll down, and find out what are the most expensive Francis Bacon paintings at auctions!

This piece is not the only a self-portrait by Francis Bacon, but a very significant artwork since it was created during the recovery from depression caused by the death of the artist’s lover George Dyer in 1971. It shows the artist dressed in boots and an unbuttoned shirt in a lavender room. The piece was put on sale in 2007, at Sotheby’s London, with an estimated price of $15,924,800-$23,887,200. Finally, this Francis Bacon painting was sold for quite amazing $43,015,400.

Seated Figure is a powerful example from Francis Bacon’s most celebrated series of works. Inaugurated by the so-called Screaming Popes of the 1950s, Bacon’s renowned series of Papal portraits were the works responsible for establishing the artist’s reputation. This silent figure painted in 1960 and cloaked in a rich blood-red crimson is a work that stands as an almost unique example from this seminal series. This Francis Bacon painting was sold for $40,000,000 in 2014, at Christie’s New York.

Exuding unrivalled intellectual and painterly command, Figure Writing Reflected in Mirror represents a stunning summation of the intensely introspective years that preceded its creation and the prevailing triumph that shortly followed with Bacon's legendary exhibition at Claude Bernard. With his muscular back turned and deeply immersed in the act of writing, Francis Bacon's nude figure radiates melancholic absorption. Exuding the refinement in line, coolness in the palette and haunting grandeur inimitable to Bacon's post-Dyer opus, this approach characterizes the second peak of the artist’s career. The piece was sold for $44,882,500 at Sotheby’s New York in 2012.

For more information about the artwork and the sale, click here!

Three Studies for Portrait of George Dyer (On Light Ground), 1964

As we already mentioned, George Dyer played an important role not only in Bacon’s personal life but in his art as well. Dyer appears in over forty Francis Bacon paintings, with as many created following his death as executed during his lifetime. His portrayal spans the full extent of human drama: at once vulnerable, brooding, romantic, absurd, heroic and tortured Bacon’s painterly incarnations traverse the sublime to the ridiculous. Painted within the first year of their meeting, Three Studies for Portrait of George Dyer (on Light Ground) materialized at the height of Bacon’s affection with his new lover. This Francis Bacon painting was sold for $45,712,500 at Sotheby’s London in 2014.

One of the most seductive paintings of a female figure ever realized by Bacon, Portrait of Henrietta Moraes depicts the artist's close friend and notorious bonne vivante. Rendered with the use of rapid, impulsive brush marks, Henrietta lies undressed in all her voluptuous glory on a simple ticking mattress. Bacon returned to Moraes as a subject for more than 16 paintings over the course of his career.

During the summer and fall of 1952, Bacon painted a series of six small portrait heads. One of the two largest works of the series, Study For A Head is identified as a "papal portrait" by the inclusion of the purple cape and white spread collar. In this work, the artist experimented with the application of thick and thin oil paint, brush size, color and hue, even mixing sand into the paint. This work forms a bridge to Bacon’s most famous Study after Velázquez’s Portrait of Innocent X of early 1953 as well as to the extraordinary series of eight large papal portraits.

More info on the work here.

A powerful eulogy to Bacon's greatest muse and lover George Dyer, Study for Portrait from 1977 extends the language of the dark, cinematic black triptychs made in the aftermath of Dyer’s death in 1971, when he took his own life only 36 hours before the opening of Bacon's career-defining retrospective at the Grand Palais. Raised up majestically against a thickly stippled velvet black screen, Dyer's sculptural form casts a long dark shadow, reminiscent of the artist’s own silhouette.

More info on the work here.

Three Studies For A Portrait Of George Dyer

Painted in 1963, Three Studies for a Portrait of George Dyer marks the beginning of Francis Bacon’s relationship with his greatest source of inspiration. A handsome petty thief from London’s East End, George Dyer was Bacon's long-time muse and lover, appearing in at least 40 of his paintings. Painted within a couple of months when Bacon’s passion for the younger man was at its most fervent, this masterful triptych exemplifies the dynamism and complex psychology that the artist is revered for.

More info on the artwork here.

One of the finest and most mysterious of Bacon's paintings from the 1970s, Triptych 1974-77 is the last in the great series of triptychs that Bacon painted in response to the tragic death of his lover George Dyer in 1971. Painted between May and June of 1974, this great Baconian landscape was the last work the artist made before a major retrospective of his work held at the Metropolitan Museum of Art in New York in 1974. As the most recent and also one of the most elaborate and ambitious of the artist's paintings to be included in this exhibition, it formed the culmination of this important survey of Bacon's career from the late 1960s onwards and was immediately recognized as both a major landmark and also perhaps a turning point in Bacon's career. The artwork was sold for $46,297,400 at Christie’s London in 2008.

For more information about the artwork and the sale, click here!

Heretical successor to a lineage inaugurated by Raphael, defined by Titian and epitomized by Diego Velázquez, Francis Bacon stands alongside art history’s consummate painters of the Catholic Church’s supreme Head and representative of God on earth: the Pope. This is only one out of several famous Francis Bacon paintings representing the Pope. The piece was sold for $52,680,000 at Sotheby’s New York in 2007.

In Portrait of George Dyer Talking, Dyer’s figure is surrounded by a halo of green and is flanked by a limpid, grey shadow on the floor beneath. It is an almost spectral figure, one of Bacon’s well-known hallmarks. This was the first painting in which Bacon incorporated sheets of paper in the foreground, and in this instance their blankness is both deeply poignant and an essential element in the composition. The piece was sold for $69,705,300 at Christie’s London in 2014.

Studies for a Portrait of John Edwards, 1986

Painted in 1984, Three Studies for a Portrait of John Edwards is a celebration of what was probably the most important and significant relationship of Francis Bacon's life. The subject of this painting is John Edwards, a bar manager from the East End of London, who Bacon had met a decade earlier and who went on to become one of the artist's closest and most trusted companions. Across its three panels, Bacon records with his characteristic verve and painterly flourishes the lithe figure of Edwards dressed in a simple outfit of a white shirt and grey pants. This great piece was sold for $80,805,000 at Christie’s New York.

The 1976 triptych is a large three panel painting (each panel measuring 78 x 58 in, 198 x 147.5 cm), with dense colors and abstract shapes. Bacon used his usual technique, starting on the left panel and working across. The piece draws on classical Greek iconography and mythology, and makes reference to Prometheus, as several interpretations claim. The piece was bought by Roman Abramovich for $86,281,000 at Sotheby’s New York in 2008.

And we have a winner - Three Studies of Lucian Freud sale broke all the records in 2014. Francis Bacon and Lucian Freud were friends, but also rivals. All three panels, in Bacon's typical abstract, distorted, isolated style, show Freud sitting on a cane-bottomed wooden chair within a cage, on a curved mottled-brown surface with a solid orange background. Behind each figure is a headboard of a bed, originating in a set of photographs of Freud by John Deakin which Bacon used as a reference. This stunning piece was sold for amazing $127,000,000 at Christie’s New York in 2014. 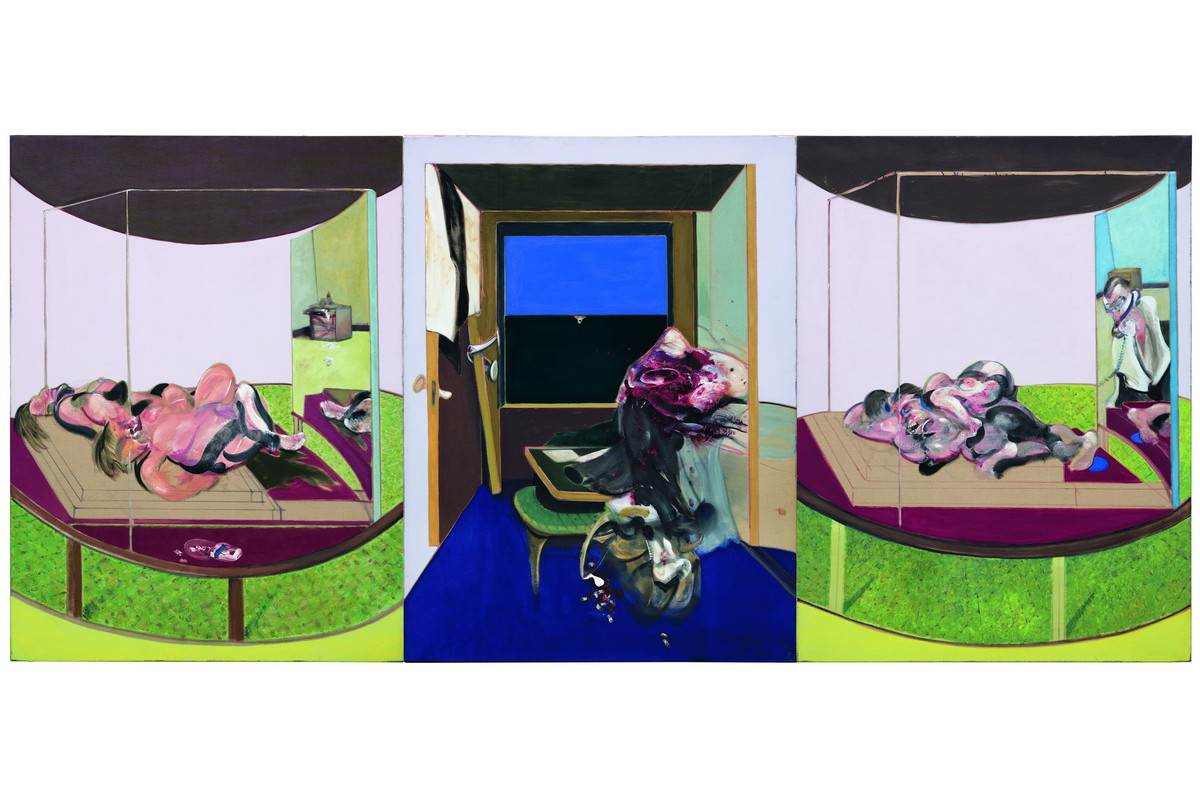 The Centre Pompidou is preparing a new retrospective devoted to the grand painter Francis Bacon, with a special take on his relationship with literature. 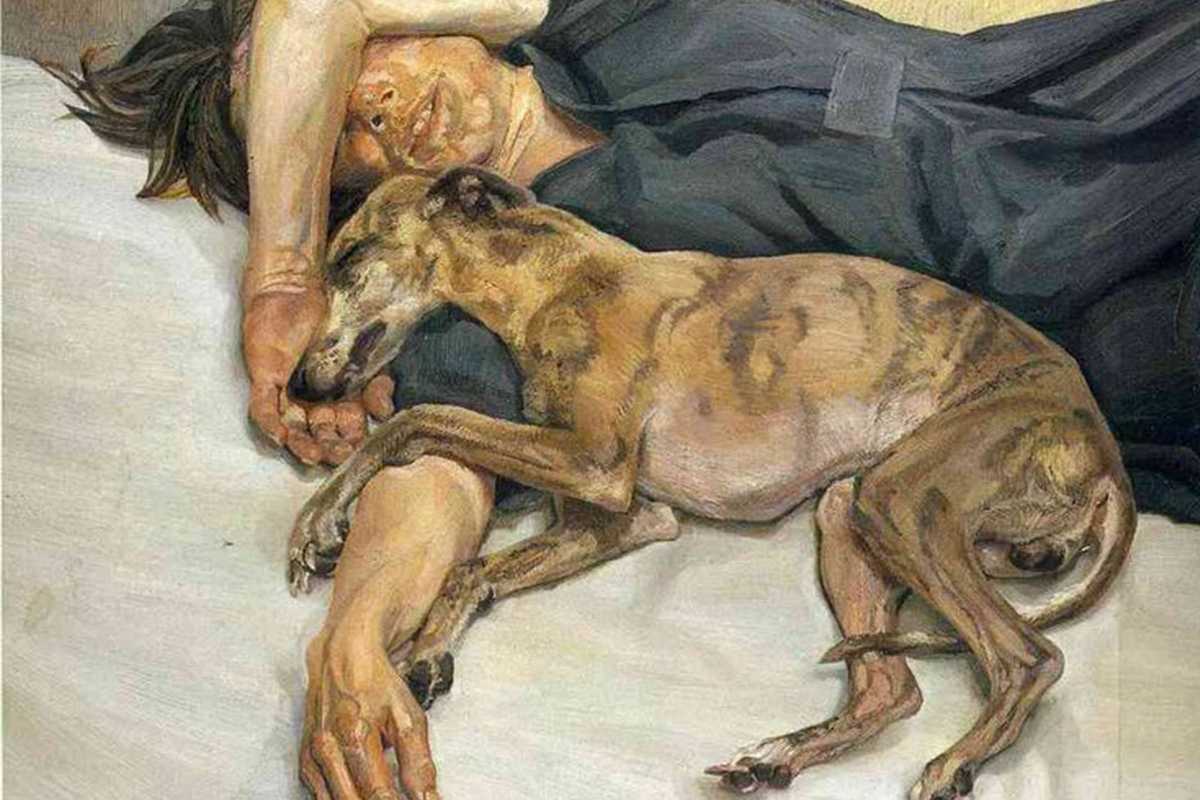 A dog is a man's best friend, painting was once proclaimed dead - how do the two overlap? Let's see what art history can tell us. 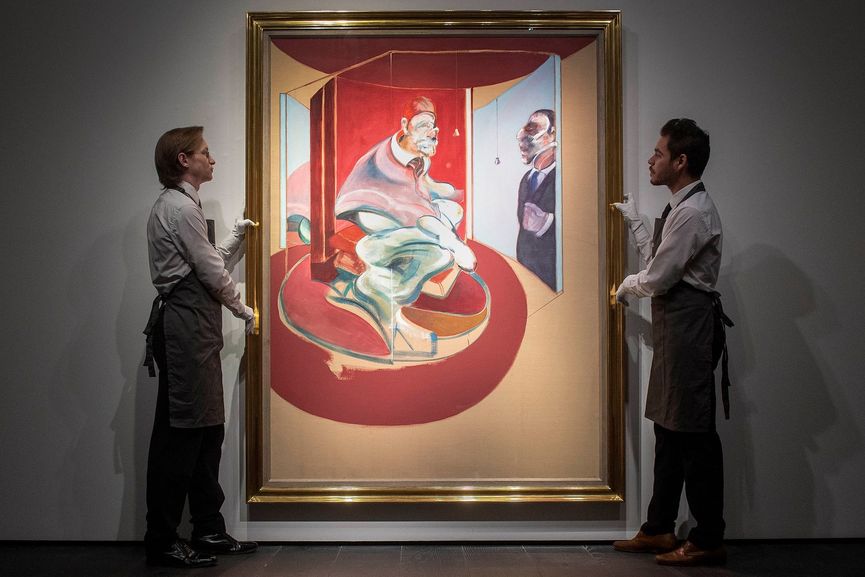 The second version of the 1962 painting Study of Red Pope by Francis Bacon will be sold for the first time after almost 50 years at Christie's London.