These are the Most Popular Contemporary Artists of February!

February has come and gone, and this year is already off to an interesting start. When it comes to our monthly list of the most popular contemporary artists, the second month of 2016 brought some significant changes, and quite a few provocative creators have made it to the top ten. We had some blasts from the past, some rising stars on their way to fame and, of course, the good old regular members of our list. Little heads up, Banksy did stay on the list, but mind you, he landed on third place. Some of the most provocative artists intrigued your imagination in the previous month, with artworks ranging from dead animals and visceral photography to controversial nudity (even bordering on child pornography). So, scroll down, explore and enjoy the top list of artists from the month behind us.

Jean-Michel Basquiat - What Would Have Been...

There may have been almost three decades since his death, but Jean-Michel Basquiat’s name has solidified into the history and fiber of art. The unprecedented dichotomies in his work have never been surpassed. The seemingly effortless conjunction of juxtaposed notions in Basquiat’s art has laid the ground for many generations to come. Uncovering the deeper truths about the individual through fascinating social commentary, Jean-Michel Basquiat’s work shall forever remain relevant and contemporary in context. His artworks still sell for jaw-dropping amounts, and his untimely death only leaves us wondering what would have been if this immense talent were still around today.

Damien Hirst - It is the Concept that Matters, not the Execution

The most prominent member of the Young British Artists, and one of the richest artists in the world, Damien Hirst claimed his rise to fame back in the ‘90s. I mean, when someone like Charles Saatchi offers to fund whatever artwork you want to create, you’re off to a pretty good start of your career. The controversy which followed Hirst’s artwork ever since he displayed his first pieces with dead animals still lingers on today in his echoing influence. Later on, with his openness about using assistants to create his works, he proved that it is the concept that matters, not the execution. Whether you agree, or not, Hirst remains part of almost any top artists lists, hey, including this one!

Be sure to check out works by Damien Hirst on our marketplace!

Alexis Diaz - Well on the Way to Stardom

The Puerto Rican painter and urban muralist Alexis Diaz has moved up one place from last month. Diaz wished to reach a wider audience with his art ever since the beginning and he has certainly made that happen. The prolific street artist has produced some of the most epic murals the streets have ever seen, and his art is lauded worldwide. The stunning level of details and the mesmerizing intricacy of his work are almost impossible to believe they were handmade, and that they are produced in such great scale. But you better believe it, because Alexis Diaz is only starting and his future is certainly a bright one as we look forward to his next marvelous artworks.

Probably the most significant leap and the biggest surprise in this month’s list is Franco Grignani. The Italian artist was actually an architect by education and he first got involved in Futurism and graphic design when it comes to artistry. He was an innovator and a trailblazer, Grignani never shied away from experimenting with optical and visual design, painting and photographs. His analytical research through pictorial means and innovative use of photograms, photomontage and overlays, have made an impact on many of his contemporaries and future generations of artists.

Recently, David Choe has been very active and kinda all over the place, last month he landed on the third spot on our list, this time, he is at 6. The very dedicated muralist, graphic novelist, graffiti artist and figure painter is quite keen on working together with various mediums to get his point across. From Facebook and HBO, to Vice and CNN, Choe has made numerous impactful collaborations and does not shy away from being in the spotlight. That’s probably one of the reasons why he’s a regular member of our monthly top list.

Any list of artists is rarely complete without at least some provocative and sexually charged artworks, and who better to play that part than Nobuyoshi Araki. The one and only, Araki is instantly recognizable by his controversial photography featuring female eroticism, bondage and fetishism. Naturally, his name has often been synonymous with scandals and censorship regarding his outlandish work. With more than 450 published photobooks, the Japanese photographer has certainly given us much to fuss about. Maintaining his position at the middle of our list, Nobuyoshi Araki remains ever-popular, after all, provocative and sexual artwork never goes out of fashion.

Another artist appreciative of the female form, David Hamilton, developed his signature style quite early on. Photographs of early-teen girl cannot be mentioned even in the context of art without raising questions of deep controversy and even child pornography allegations. Whether it is art or pornography, it’s left upon the individual to decide, but cases have been reported where men convicted of being in possession of inappropriate images of children also included photos by Hamilton. On the other hand, his books have sold in millions worldwide, although his work is officially banned in several countries.

I guess some of you were wondering where the hell Banksy was on the list. Well, here he is, landing to third place from the last month’s winning position. Whether it’s actually him doing something noteworthy, or it’s people around him who use his unfathomable fame, those 6 letters simply cannot be escaped. Banksy has reached a completely new realm of existence, going well beyond a celebrity status, or a famed artist, his name is a cult. You may not consider yourself a devoted follower, but his influence is omnipresent. But you do have to give the guy props, if not for the truly fascinating work he produces, then at least for the unmatched circle of mystery around his “unknown” persona.

Browse Banksy's works on our marketplace!

Bettina Rheims - From Strip-Tease Photos to Major Celebrities and Magazines

Starting her career with a series of photos of strip-tease artists and acrobats, Bettina Rheims developed her approach to photography and over the years became one of the most prominent people behind the lens. “I love the flesh. I am a photographer of the skin” is her famous quote which, quite perfectly, describes her art. It is raw and sexual, often including nudity and stuffed animals with which she accomplishes a visceral feeling that captivates the viewer. Some of her best-known works question gender and issues of androgyny and transsexuality. She may have started with the obscure and marginalized subjects, but her later projects included advertising campaigns for fashion and huge brands, such as Chanel and Lancôme, among other popular international magazines. Madonna, Charlotte Rampling, Catherine Deneuve, Kylie Minogue, Claudia Schiffer and many others became subjects of Rheims’s photography. And there is something undeniably human and real in each and every photo she makes, almost too natural and personal.

Finally, we reach the end, or should we say the top, of our list. He was the first American artist to gain international reputation and acclaim as an innovator without having studied or worked in Europe, where modernism originated from. Famed for his style of "drip", "drip and splash" or "action painting", and sometimes even mixing broken glass with his paint, Jackson Pollock remains as one of the biggest names in the world of art. At the age of four, he chopped off the end of a finger, but it was not an act of artistic madness (read Van Gogh), it was an accident while playing with a hatchet, although Pollock did have a nervous breakdown which left him in a psychiatric care unit for a few months in the summer of 1938. Be that as it may, it probably only added even more flavor to his eccentricity and provocative nature. Interestingly enough, the artist lived in very poor financial conditions, forcing him to steal food and gasoline during the 1930s. Fast forward to 2006 when Pollock’s No.5 became the world’s most expensive painting, sold for a staggering price of $140 million. His alleged paintings were involved in a recent scandal, but his true artistic legacy lives on, inspiring numerous generations of artists. 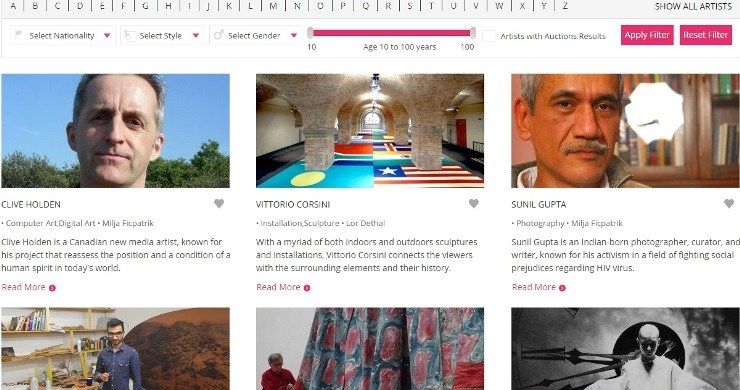 Below, you will find a more elaborate list of most popular contemporary artists in Widewalls database.