Here are the Most Popular Contemporary Artists in January!

The end of every month brings a special kind of joy to the editorial team of Widewalls. We are lucky enough to be able to look back on the period behind us and see who are the extraordinary individuals you have enjoyed following during the past 4 weeks or so. Within a set of artists, which our community of followers considers to be the most interesting and inspiring ones, there are those who always stay in the center of various art driven phenomena and almost unmistakably wind up in the top ten most searched for individuals. However, the arena of Urban and Contemporary Art, being a dynamic field of exciting concepts, processes, relations and people, always brings some intriguing and inspiring creative individuals to the top level of cultural discourse. Although newcomers to our list, these artists are not newcomers to the world of art. What is more, they are more than worthy to “stand” side by side with those considered “residents” of our monthly list.

Before checking out who are the the top 10, be sure to find out more about other top searched artists in our database – Shepard Fairey, Khadiga El-Ghawas, Tracey Emin, Mode 2, Hannah Chloe, LOOK The Weird, Herakut, Eduardo Kobra, Invader and Borondo.

So, if you are ready, lets get to know better the artists you have been fascinated by during the month of January – here are the most viewed artists on Widewalls!

Coming from the rich cultural space of Japan, is the talented creator of extraordinary sculptures, achieved through a unique and meticulous methodology – Riusuke Fukahori. “To me, what is underneath the surface of the resin symbolizes the spiritual world. Even while I paint, I believe that what lies under the surface is a spiritual world where the painted goldfish and seaweed come to life. This is eastern animism. This stems from an experience I had as a student, when I visited a museum displaying Buddha statues and I felt as though they were moving. From that moment, I was determined to bring life to all of my works.” Read the interview with Riusuke Fukahori, who was recently a part of our selection of 10 Japanese Artists Under 50.

Xooang Choi is a Korean artist, born in 1975 in South Korea. Choi personifies what he feels inside canalized by every emotion in a multidimensional way. He works through the whole body or a part, focusing on the intensity of sensation as he crystallizes life filled with so much severity and darkness. His artistic intuition suggests that Man hides behind his body, but that the soul is so powerful that skin speaks a language of its own, howling when it hurts and playful when peaceful. However, when continuously fighting against society and the burden of existence, the quintessence of numbed flesh dies even though the blood flows and the heart still beats.

He is street art’s notorious son. A man who has managed to confuse and inspire millions of people across the globe, all at the same time, and much more. He is nowhere to be found, yet his messages span cross continents and societies. But, most of all, he is a Contemporary Art enigma. Widewalls has tried to participate in the quest for answers to the questions Banksy keeps bestowing upon us – be sure to have a look at our featured articles O Banksy, Wherefore Art Thou Banksy? and Banksy: A Relentless Market. Most recently, Steve Lazarides has set a number of early Banksy pieces “free into the world” (have a read in Auction Analysis – Bonhams: Founded 1793). All in all, wherever you turn within the arena of Street Art, you are not to miss Banksy. And, January of 2015 is no exception.

If you follow the world of art you know this name and this is a situation which is hardly to change. Jean-Michele Basquiat is today, the by far the most expensive urban artist, in fact he is one of the most expensive artist in general. In 2012/13 Basquiat achieved total auction sales of €101.000.000 with the highest auctioned painting reaching a hammer price of €33.508.000. This makes Basquiat the most expensive contemporary artist, before Jeff Koons, Damien Hirst, Takashi Murakami or Anish Kapoor. Join us on discovering more about this exceptional individual, check out our featured articles Loving Basquiat and Warhol and Basquiat: Play It Again, Sam.

He is an explorer of multiculturality. He is a designer, turned street artist, turned contemporary artist with a particular sensibility of contemplating various cultural spaces. Hush presents contemporary depictions of traditional portrait and figurative imagery through an inventive mix of seemingly incompatible themes and aesthetics. Through his technique of layering divergent aesthetics, Hush’s contemporary paintings disclose the beauty produced by years of decayed tagging and the possibility of creating something new. Most recently, we were able to see his work at Littletopia, presented by Corey Helford Gallery.

Nick Walker draws on the energy and imagery of graffiti but he succeeds in combining the freedom the spray can brings, with very controlled and intricate stenciling. The results are highly sophisticated and infinitely desirable. The methods he uses retain their forcefulness and integrity on the traditional medium of canvas. Walker’s instantly recognizable style and humor have gained him a worldwide following. He has had sold-out shows in LA and London, where collectors queued for over 24 hours to be among the first to get his latest print edition. Recently, we were able to see his work at a group show Cut It Out!

Diaz’s incomparable art has been much talked about, because his performance is worthy of the greatest engravers of yesteryear, such as Doré or Daumier. He has a preference for wild animals in general, more specifically those living in the Savannah. He blends them in a fantastical image with creatures from the depths of the oceans, replaces paws with tentacles and wings with hands. These compositions usually create a machine of flesh, as he replaces a balloon with a heart and a basket with a fish. This Puerto Rican artist’s murals have been commissioned nationally in cities as diverse as Los Angeles, Atlanta, Richmond and Miami and internationally, besides in the U.S., in Puerto Rico, Mexico, Argentina, South Korea and dozens of other countries. You are able to check out his work at POW! WOW! Hawaii 2015!

Critics are sharply divided in their views of Koons. Some view his work as pioneering and of major art-historical importance. Others dismiss his work as kitsch: crass and based on cynical self-merchandising. Koons has stated that there are no hidden meanings in his works, nor any critiques. Love him or not, his work is something that cannot be overlooked and his retrospective at the Whitney Museum of American Art only proves this. In addition, not much is changing if we look at the art market. Jeff Koons pieces are almost always present at auctions.

Conor Harrington’s work draws a fine line between classical and contemporary art, and masterfully creates a world within those boundaries by using the realistic images of people in his pieces, incorporating abstract elements to accompany his painted subject. His illustration of the human form is mesmerizing: he skillfully hones in on certain parts of the figure while obscuring others through the use of bold line work, superb shading and bursts of color within his creations. There is also a more subdued side to Conor Harrington’s art, relying on a darker color palette to convey his intended message to his audience. More and more, his work is being recognized by collectors and art lovers, as his pieces keep (re)appearing as part of various auctions.

Denning uses not only powerful brush strokes to express his emotions deeply but also scratches the paint to show the audience the intensity of the emotions he is trying to portray with his artwork. He also sometimes uses stencils and collaged text. He has also been invited to work on a variety of community urban art projects and has developed a distinctive style that builds images from drawing and stenciled text. Through a recognizable visual narrative Guy Danning continues to change and shape the face of Contemporary Art… 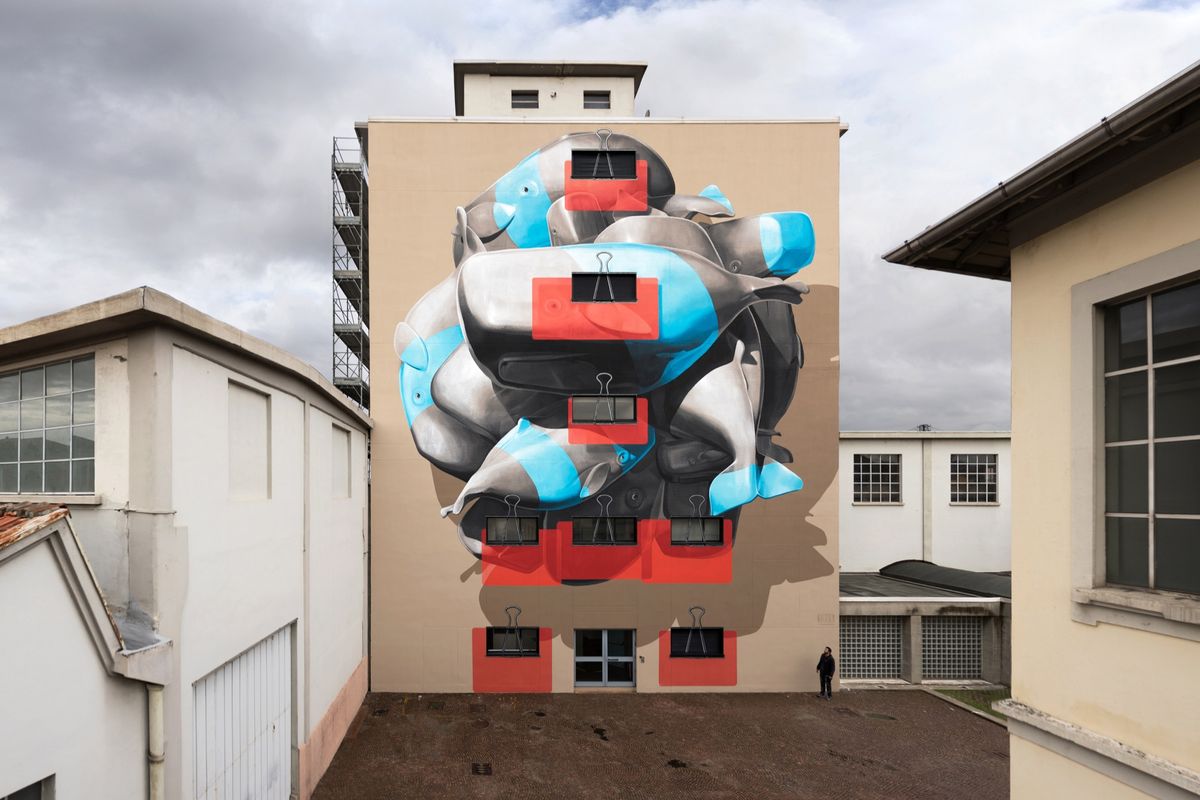 In our Street Update number 172, we bring you a selection of pieces which caught the attention of our Instagram followers during November. 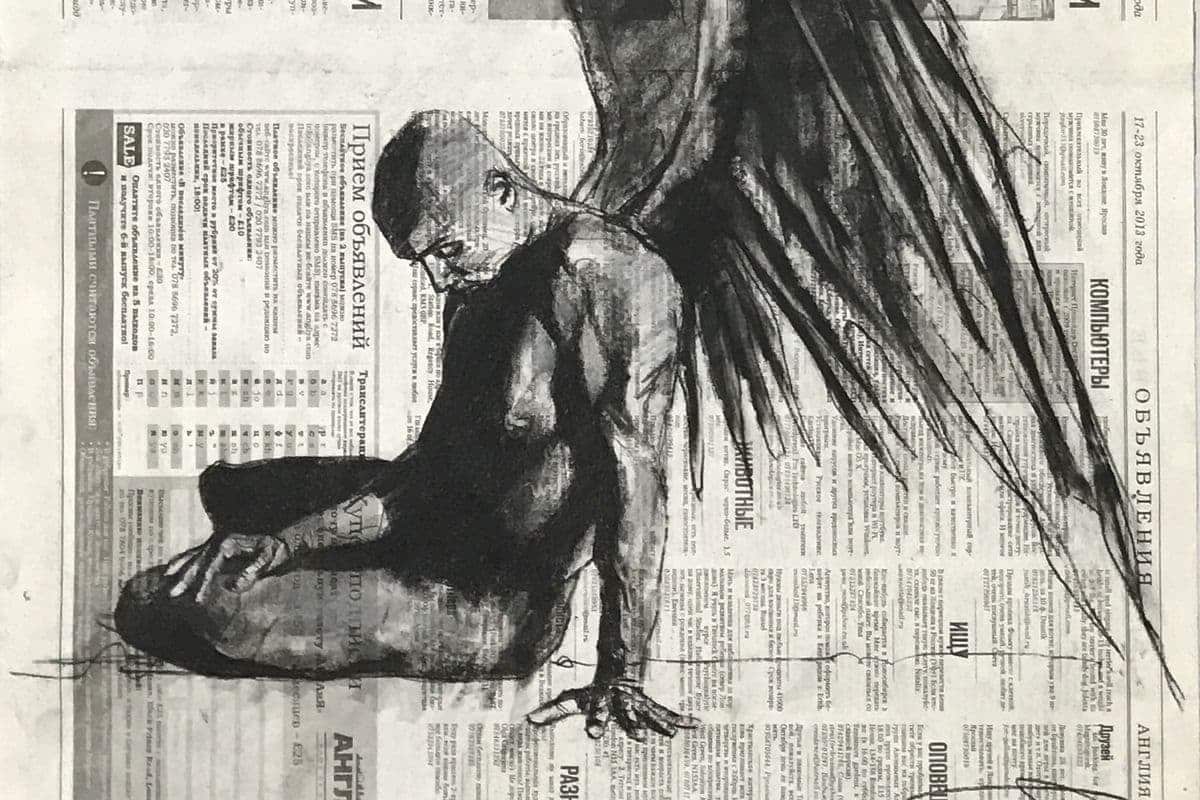 In their last exhibition for this year, Pretty Portal Gallery will bring together three talented artists – ARDIF, Pixel Pancho and Guy Denning. 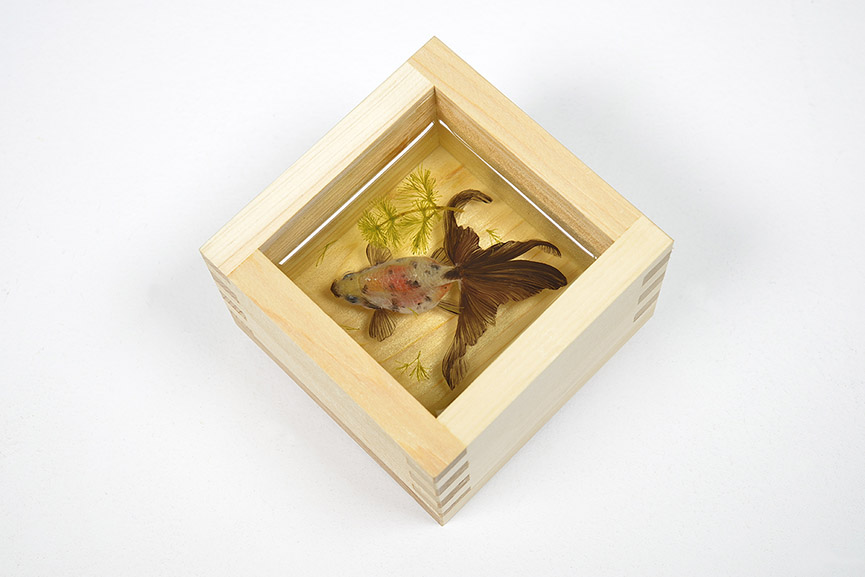