10 Op Art Artists Whose Work You Have to Follow

The nature of perception, optical effects, illusions and visual stimuli have been fascinating artists for many centuries. Optical Art, or Op Art, is relying on optical illusions and is sometimes even referred to as retinal art. Some critics would even call it a mathematically-themed form of Abstract Art, considering the use of repetitive forms and colors in order to create vibrating effects, foreground-background confusion and an exaggerated sense of depth.

This is exactly what the Op Art artists wish to cause with their mind-boggling artwork - they tend to confuse and excite the eye, to bring a static image to life with various optical effects, illumination, different materials and angles of view. Some of the Op Art examples may even cause queasiness or discomfort, but they definitely push the boundaries of our perception. Often brought down by the art critics, this artistic movement is a truly unique form of expression, one which requires a high level of precision and calculation in order to produce the effect it is meant to.

Originating in the mid-20th century, Op Art was brought to life and developed by the likes of Victor Vasarely, Bridget Riley, Richard Anuszkiewicz and many others. It may have been short-lived, but this intriguing art form was, and still is, very significant. Here, we will take a look at 10 Op Art artists who contributed greatly to the exploration of our visual abilities in the artistic movement that is Optical Art.

Widely considered as one of the forefathers of Op Art movement, Victor Vasarely struggled to create a universal visual language that could be understood by everyone. The French-Hungarian artist sought to produce an engaging approach to art which was deeply social. He managed to accomplish this through geometric abstraction, which gave birth to the short-lived movement of Op Art. Vasarely’s complex and colorfully engaging patterns convey a kinetic energy which is transposed to the viewer. The principle of internal geometry in the natural world is one of the motifs that Victor Vasarely pursued throughout his career. His illusions of depth, motion, and three-dimensionality laid the ground for the future Op-artists.

With pure form and color being the focus points of his oeuvre, Richard Caldicott produces his work in a painstaking way which involves cutting and assembling of the paper in the physical realm before taking a photograph of the work. This London-based Op Art artist creates artwork with different materials, often experimenting with the techniques of drawing, photography and sculpture. Sir Elton John is an avid collector of photography, with one of the largest collections in the world, and he described Caldicott’s work as having the unique ability to transform the medium of photography into something new, while using the most traditional technique.

Take a look at the available artworks for sale by Richard Caldicott at our marketplace!

The Italian-born artist, Marina Apollonio is one of the internationally recognized representative figures of the Optical art movement. Marina grew up in an artistic surrounding and quite early she developed a passion for perception and visual communication. Marina shared a desire for depersonalization in art with other Op Art members, as opposed to the concept of expressive abstraction. She explores the various ways in which elementary forms and structures may appear. After this process, Apollonio executes her work rigorously, all based on a mathematical system. If the main shape is a circle, she finds a way to bring it to life, make it active and dynamic, garnering maximum result via minimal means.

You can see details of her artwork here

Peter Sedgley – Bringing Art to Life with Light and Kinetics

The acknowledged Op Art artist, Peter Sedgley is famous for occasionally using light and kinetics to bring to life his optical compositions. He has been producing luminous paintings of circles and other optical explorations since the 1960s. Throughout his career, Sedgley received numerous awards for his exemplary work. He is known to have experimented with elements such as video-rotors and audio-visual incorporated art. Animated by kinetics, his illuminated prisms and projections come to life, almost as if they had a mind of their own, existing without human influence.

Richard Allen – Exploring the Relationship between Art and Science

Born in Worcester in 1933, Richard Allen was influenced by his father to pursue the path of agriculture. Allen studied at Shropshire Institute of Agriculture where he actually started developing interest for art. After learning the key concepts to making optical-art, Richard attended the Bath Academy of Art where he continued to further develop his style and skill. Richard Allen explored the relationship between art and science, experimenting with color, line and optical effects. Before his death in 1999, Allen was diagnosed with Motor Neuron Disease, and even though he tried to fight it and continue making art, the rapid onset of the condition prevented him from making any progress. But, the work he left behind puts him on any list of top Op-artists.

Have a look at Allen's artwork in more detail here

After graduating from University of Maryland with a B.A. in American Studies, Carol Brown Goldberg proceeded to explore the relationship between art and science. Her art is characterized by the use of reflective chips embedded among acrylics on canvas. Carol’s work is quite unique and instantly recognizable, her art has a certain hypnotic element to it, almost mesmerizing the viewer with the colors and detailed shapes. Her optical-based paintings have been described as gatherings of energy that pull the viewer into a limitless abstract universe. It sometimes does seem like the artist somehow manages to delve into an astral-like boundless space beyond our dimension, almost allowing us to gaze through a portal into a great abyss.

Using materials of paint and wood, Ara Peterson records wave patterns into sculptural forms. He aims to capture the motions of waves into a static shape, all the while using the static material of wood to give it the appearance of movement. Peterson’s sculptures seem to be floating, weightless and spaceless, providing a visually intense experience with an animated vibrancy. The American artist defies the characteristics of the technology and materials he uses, resulting in unique artwork which makes the viewer wonder and question the process behind it.

Born in 1930, Richard Anuszkiewicz was considered as the American new wizard of Optical art. Ever since he was a child, Richard enjoyed art and was encouraged to pursue this passion by his father. During the late 1960s and early 1970s, he was one of the founders and most important figures of Op Art. Even today, Anuszkiewicz is a well-known force in this art movement. His work reflects upon the optical changes that occur when a variety of high-intensity colors are implemented in the same geometric configurations. He described his own Op Art designs as having an experimental nature, centered on the study of changing conditions of light and the effect of light on color.

Drawing her inspiration from scientific spheres like mathematics and physics, Tauba Auerbach incorporates a plethora of media in her work. Painting, photography, book design and musical performance are just some of the conduits for her creative force. Auerbach questions the limits of structures and explores our systems of logic, reducing them to their basics and rebuilding into new visual and poetic forms. She is most famous for her Op art which challenges our perception of space. As she described some of her work, it is lingering in a liminal state between two and three dimensions.

Check out our available artwork for sale by Tauba Auerbach

The Italian graphic artist, designer and art director, Getulio Alviani dedicated his work to the study of problems relating to structured plasticity and visual communication. He worked with plastic objects in series, dynamic-optical structures and aerial electric wires. In the early 1960s, Alviani designed his “Vibrating Texture Surfaces” made from steel and aluminum, which became one of his most recognized works. Using also the luminous reflection and refraction, Getulio Alviani created a unique experience for the viewer. Later on in his career, the artist produced luminous objects with mechanical movement, visualized physical and chemical phenomena, exploring the relationship between the eye and the referent object. 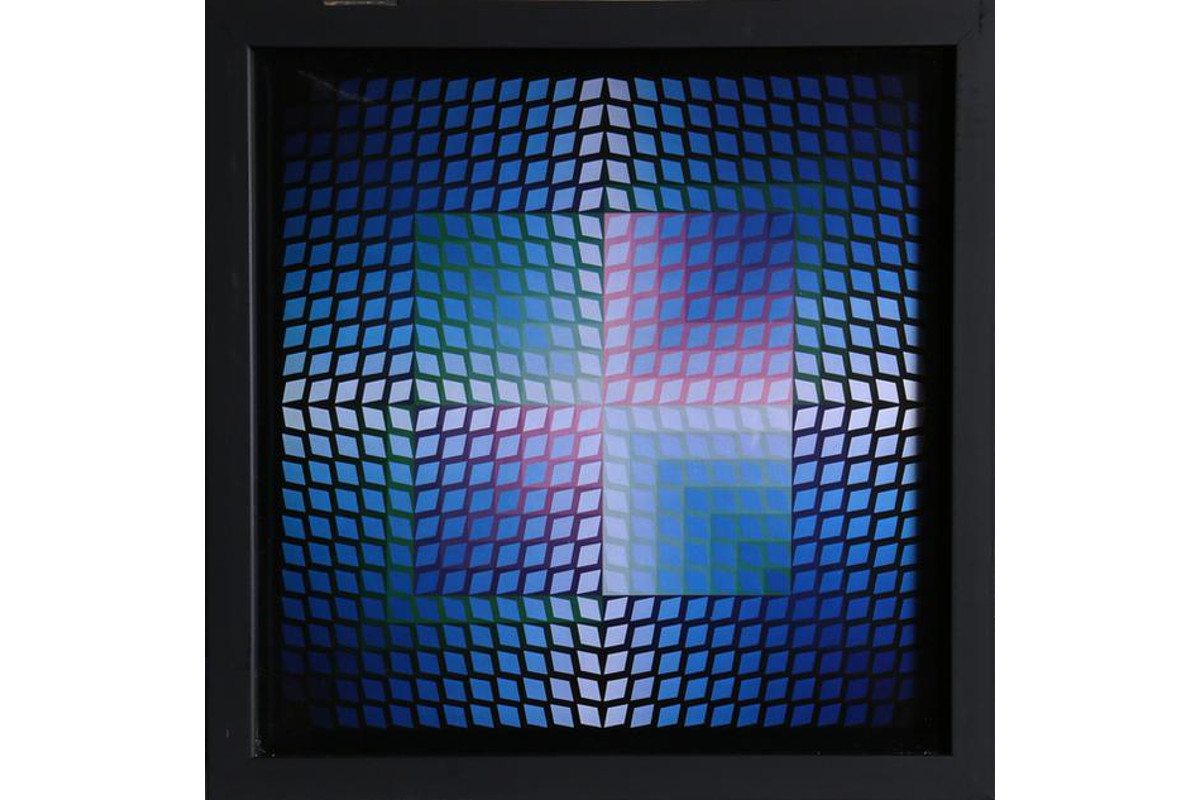 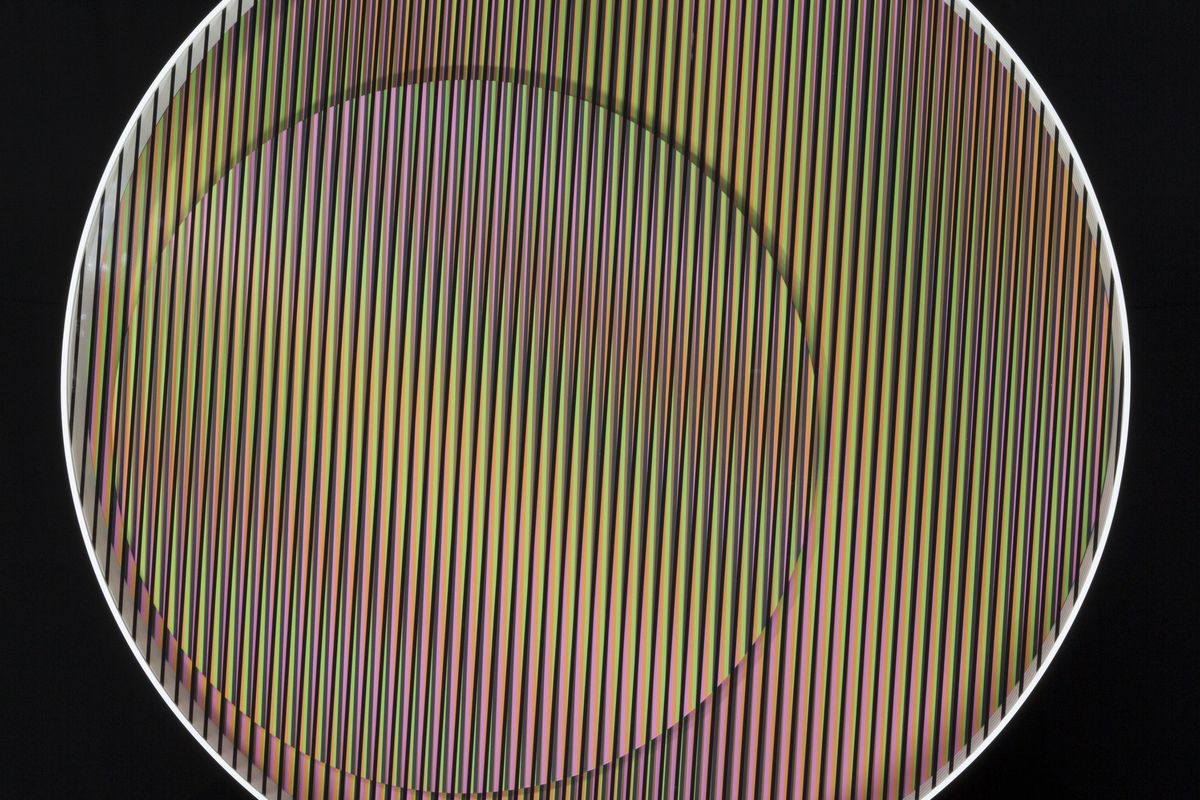 In the first exhibition after his recent death, Dep Art Gallery in Milan will trace the artistic journey of the acclaimed Venezuelan artist Carlos Cruz-Diez. 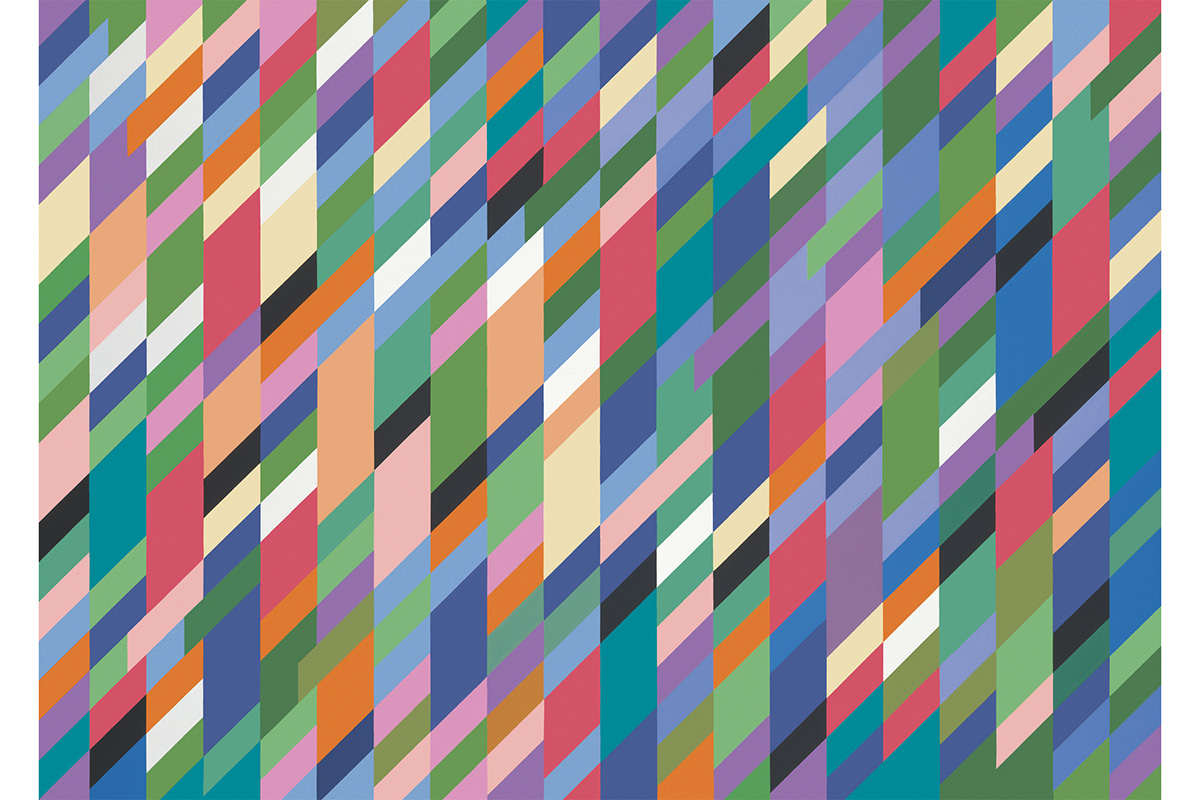 A Bridget Riley survey at the National Galleries of Scotland features seven decades of works and ephemera tracing the career of one of the most influential artists living today.