It's Oscars Time and Plastic Jesus Strikes Again! Here are his Installations Over the Years

For movie lovers, February means the Oscars season. For art lovers, it means Plastic Jesus will reveal another one of his visual commentaries on the matter.

These installations could now be considered a tradition - this is only the seventh time that the LA-based street artist has made headlines with his witty, to-the-point art. But it’s not just his Academy Award-related pieces that could be described like that, it’s his entire oeuvre, from sarcastic paste-ups to intelligent guerrilla projects that include the tiny wall built around Donald Trump’s Hollywood star, fake Donald Trump dollars, and two giant lines of cocaine installed on the sidewalk and accompanied by a rolled-up $100 bill and an American Express card.

The art of Plastic Jesus is inspired by world news events, the urban environment, culture and politics, “shinning a small light into some of those dark corners of society”.

Like most of his pieces, the Oscars-bashing artworks are only left in place for a limited time and then removed, all the while minimizing harm to the world around it. He even invites citizens who don’t want his artworks on their property to call him, so he can remove them.

Let’s take a look at the seven years of Plastic Jesus making fun of the movie industry’s finest.

Speaking of drugs, Plastic Jesus’s very first referral to the Oscars saw the light of day in 2014, with Hollywood’s Best Kept Secret and the figure which injects itself with heroin through a syringe.

The 8-foot-tall sculpture, erected on Hollywood and LaBrea, happened to coincide with the reports that actor Philip Seymour Hoffman died of heroin overdose.

The piece is really to bring attention about the lack of understanding and support… In Hollywood people almost proudly boast that they’re a member of Alcoholics Anonymous. That’s a good thing. However, with hard drug use, there’s still so much of a stigma attached. It’s swept under the carpet and people don’t get the support that should be available to them. So many people have been touched by drugs and drug use.”

In 2015, Plastic Jesus’s Oscar figure was down on its knees, snorting some cocaine on the red carpet. Hollywood’s Best Party even had its own security and it drew attention to the fact cocaine was sold more than Coca Cola in 2014.

We tend to believe, however, that the piece refers to Hollywood’s own obsession with drugs as well…

What Plastic Jesus tries to achieve with these works is ”to highlight issues that often go unnoticed in the glitz and glamor of Hollywood, these have included drug addiction, hero worship and exploitation.”

With Back-Up plan, this vision continued, as it showed the famous golden statue as a stripper in high heels, with her nipples barely covered and dollar bills hanging from her belt. That’s what she can do if this whole movie business thing fails!

Plastic Jesus donned another installation that year on Hollywood’s Melrose Avenue, following the then-popular hashtag #OscarsSoWhite. Calling to mind the famous image by Elliott Erwitt, the one of segregated drinking fountains, it shows dressing rooms for white and black people, with quote obvious differences.

Like all of his pieces, Plastic Jesus’s False Idol was installed on Hollywood Blvd. in Los Angeles, of course very close to Dolby Theatre, where the Oscars take place.

This Jesus was installed for a short period of time, before being exhibited within galleries. It would seem that the Oscar statue changed into a hulky man showing off his bling for everyone to see.

Casting Couch is the name of this year’s Oscars piece by Plastic Jesus, created in collaboration with Ze Ginger. As we could guess from the name, it features the most despised man in Hollywood right now, Harvey Weinstein, as a life-size golden figure sitting on a golden couch with an Oscar “peeping” out of his robe.

…whilst many thought the ‘casting couch’ was a thing of the past, it was clearly still a part of the Hollywood culture.

For many years the exploitation of many hopefuls and established names in the industry was brushed under the carpet with their complaints of harassment and sexual abuse being ignore or worse.

The piece took two months to produce thanks to many sponsors and a crowd-funding campaign, and we can also expect a documentary about it, titled For Your Consideration and coming out soon.

Wearing an Oscar-gold suit and holding the Pride flag, a statue of Kevin Hart was Plastic Jesus's tribute to the 2019 ceremony. The comedian is standing on a pedestal reading "Hollow Apology", referring to the way Hart apologized, or rather failed to do so.

Hart was set to host this year’s Academy Awards ceremony, but was removed from the position after his old Tweets containing homophobic comments resurfaced. Although he received serious criticism, Hart refused to apologize, before finally doing so a few days after. Many thought his apology was half-hearted and not very honest.

In Plastic Jesus's 2020 calendar for the Oscar season, it's time to get back to Harvey Weinstein, this time in form of a golden walker placed in its usual position, walking distance from the Academy Awards ceremony.

The walking aid is placed atop a red carpeted platform adorned with a brass plaque which reads: “Best Supporting Role”. Hanging from the gold hand rail is a ‘props dept.’ tag that reads “Item #132586 Please return to Props Dept.”

The work refers to the disgraced movie mogul Weinstein who was seen entering the courtroom in New York using a walker like this one, prompting many to wonder whether he actually needs one. More than 70 women have accused Weinstein of sexual misconduct, including rape.

In a statement the artist commented:

The supporting role is one that is often over-looked. Without great support so often the lead character can appear shallow, fake or inauthentic. This year I’ve decided to honor the support given to many leading figures within the movie industry, without whom great performances would be nothing more than a charade. 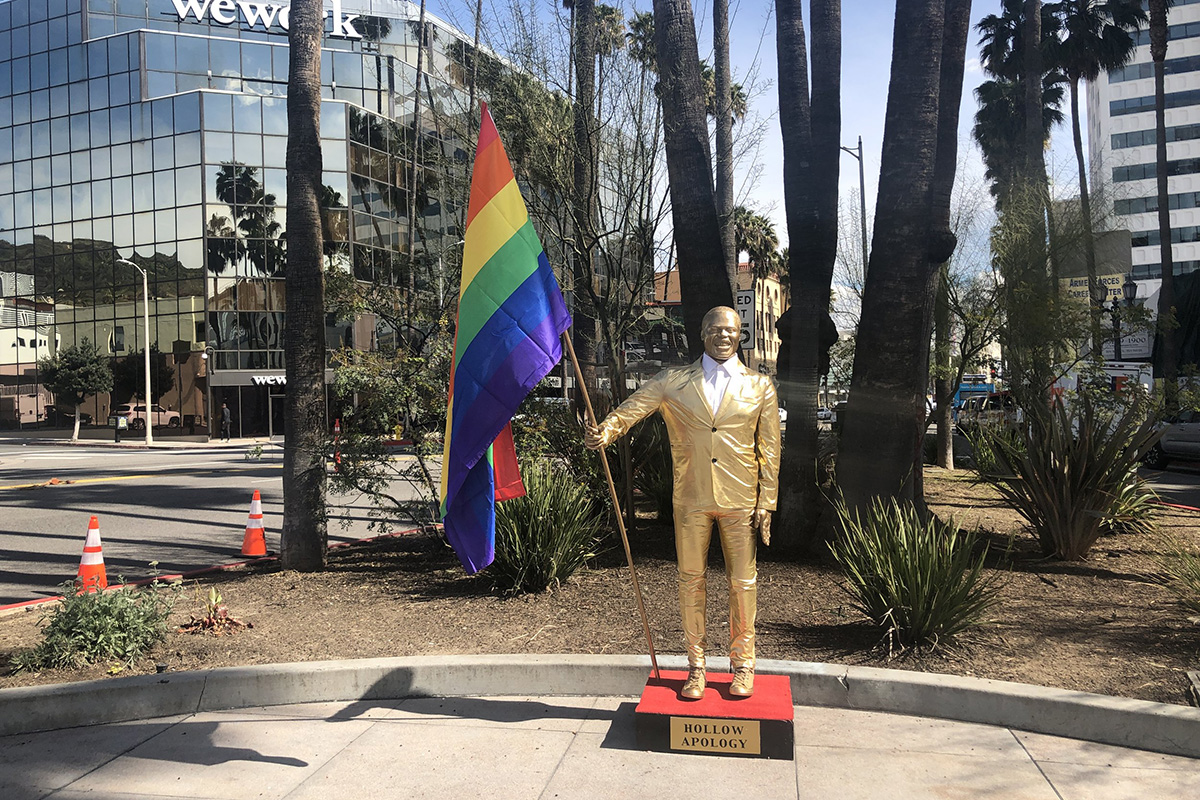 It's almost time for the 2019 Oscars ceremony, and that means it is also time for a brand new Plastic Jesus statue on Hollywood Boulevard! 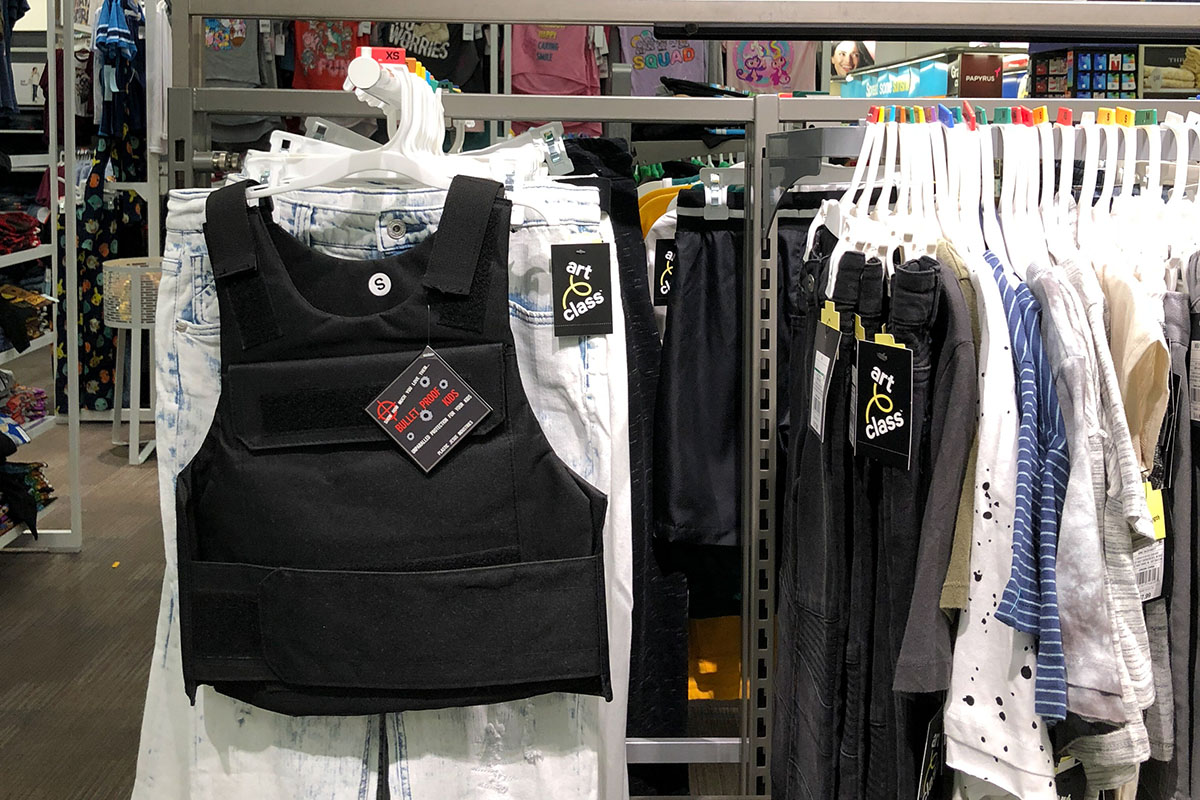 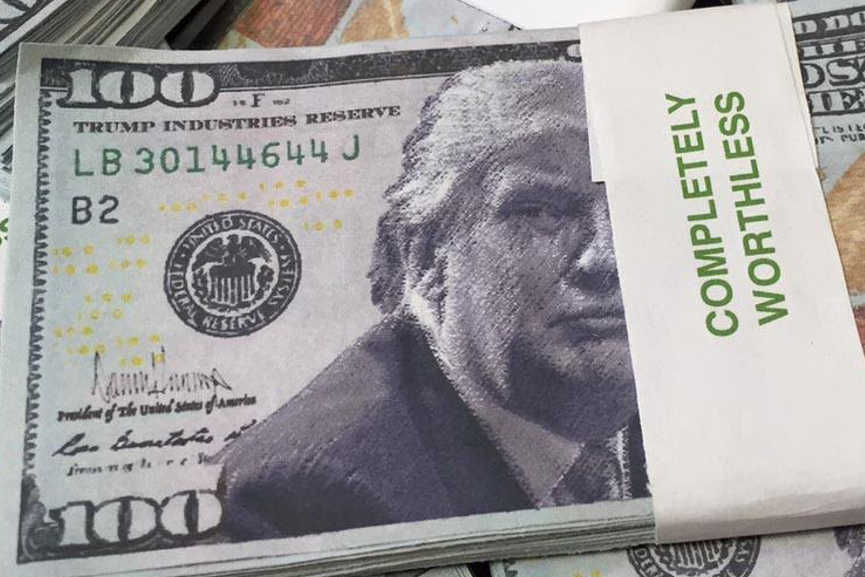