The Most Expensive Roy Lichtenstein Artwork

Talking about Pop Art rarely goes without mentioning the name of Roy Lichtenstein. In a manner somewhat similar to Andy Warhol’s, which practically conceived one of Pop Art’s possible definitions, Lichtenstein’s work had that double-agent feel to it as well. The difference was, Warhol’s straightforward approach made it hard to distinguish high culture from low, and caused a complete confusion in art, which has not been clarified to this day. Roy Lichtenstein was a bit more precise, and made the statement and the parody more obvious, although it did not stop him from crossing over into a more mainstream part of culture. Lichtenstein was, nevertheless, a very successful fine artist - he was, for example, the first American ever to exhibit at Tate Modern.

The comic-book style that he is today most famous for was a breaking point in his career, and although it was not something he had continued on doing all of his life, it did greatly affect art history. The enlarged versions of comic-book panels were groundbreaking, however, often subject to arguments and debates over copyrights. Allegedly, Roy Lichtenstein did not seek permissions from the authors of the originals, while he was deliberately “copying, but really restating the copied thing in other terms. In doing that, the original acquires a totally different texture. It isn't thick or thin brushstrokes, it's dots and flat colors and unyielding lines.” Today, we’re able to witness the importance of introducing these modified reproductions as independent forms of art. And now, let’s see really how well those works were received, at auctions.

Be sure to check out works by Roy Lichtenstein on our marketplace!

After a period in which he experimented with sculpture and other forms of art, Roy Lichtenstein went back to the comic-book genre once again in 1988. In his suggestively named Reflections series, he brings back some memories, and here the term memories can be observed through various discourses. He brings back the memory of his own progressive style, but he also tackles memories from people's lives through the content of these artworks. Reflections on the Prom bring back the teenage days, and refer to the highlights of young American dreams, bathed in romance between young people who repeatedly appear in Lichtenstein's works.

Find out more about the auction here.

As you will find out in some of the next artworks included in this list, the melancholic heroine is one of Roy Lichtenstein's most crucial protagonists. In this oil & Magna painting, he brings her back to the canvas, and re-introduces her to the audience, in the light of a more contemporary time and scenery. This is also a period in which he started revisiting nudes, and exploring the genre's possibilities when combined with Pop Art, which was at the same time his last research, before his death in 1997.

A work which embodies the very essence of confident and unadulterated female sensuality, Nude Sunbathing features a woman imbued with a magnetic charisma that completely and utterly seduces the viewer. Executed in his bold signature style, it is part of his celebrated late series Nudes, the last major body of work before the artist’s death in 1997. Rendered in an emboldened red-on-red palette, the seductive figure is presented against the backdrop of Lichtenstein’s trademark Ben-Day dots.

More data about the work here.

The ultimate crescendo of Lichtenstein’s pioneering investigation into the form, content, and meaning of Contemporary Art, Female Head features a woman fixing on the viewer with a sidelong glance that is both irresistibly seductive and utterly elusive. Fracturing and reconfiguring three distinct profiles within a single portrait, it is a paragon of the artist’s celebrated Surrealist paintings.

Part of Roy Lichtenstein’s famed Brushstroke series, Red And White Brushstrokes questions the revered status of the painterly mark and fundamental beliefs about the artistic process. In this series, he took the essence of painting – the brushstroke – and framed it within the Pop idiom. Depicted with drips and set against a field of Ben-Day dots yet again, it represents a gesture of control rather than spontaneity, that was celebrated during the era of Abstract Expressionism. Lichtenstein challenged this notion of artistic authority by reinterpreting these spontaneous marks in a commercial, mass-produced way.

This is another one of the artist's late nudes. It is based on a comic book frame, taken from a 1967 comic entitled Reaching for Happiness: Can you be thrilled by one man while you're in love with another? It depicts the girl in an intimate atmosphere, dressing up in her own bedroom, but a piece of another girl's hair interrupts the casual atmosphere in the picture, coming from the left. The detail completes the narrative, represented in Lichtenstein's signature style, using Ben-day dots and bold outlines. The girls seem to be less insecure and concerned than the ones who appeared in the artist's earlier works. They look more confident and independent.

Take a look at the painting and the details related to the auction here.

A pivotal work from the artist's oeuvre, Kiss III depicts a man and woman sharing a close embrace and a passionate kiss. Rendered in primary colors, the composition mirrors the color scheme of mass-market printing. With the replication of the Ben-Day dots and bands of intensity which create subtle striping, the artist manages to further allude to cheap printing and the color illustrations of comics and newspaper advertisements.

More data about the work here.

The original image, on which this enlarged frame is based, comes from Love Me Not for Beauty Only, a story in which a blonde girl is frustrated by all the troubles she experiences in romance. In that original comic, there is a thought bubble hovering above the girl's head, and it says "His thoughts are with that other girl...Oh Danny...Please love me! Don't let her take you from me...". In his own, signature manner, Lichtenstein made the girl's body become larger than life and cropped out the text line, but also stripped of her night clothes, which existed in the original. The artist found the "stripping" very interesting, and explained: "It's kind of amusing that you just paint them and leave the clothes off and it means something different. It's more riveting".

Find out more about the piece.

And now we travel a few decades back in time, and return to the period in which Roy Lichtenstein probably discovered himself, and was discovered by the art world and the mass culture as well. This is often denoted as one of the most subtle, yet complex and provocative works made in this era. The work shows a combination of two different sentiments (as, you may have already noticed, it often happened with Pop Art): one refers to the very delicate, emotional moment in life, and the other lies in the way that the emotion is represented - with a rather mechanical approach, which is reminiscent of the infamous aesthetics of advertising.

It wouldn't be exaggerating to say that Ohhh...Alright... is a classic. This really is an iconic piece, not only in Lichtenstein's admirable oeuvre, but also when it comes to the entire 20th century art. The woman in distress is the key figure and a cipher in most of Roy's work, the one that many can attach to and relate to based on prejudice, either with sympathy, or with disapproval.  The original from which the girl and the scene was taken is the 88th edition of a comic magazine from 1963, named Secret Hearts. For a long time, this piece was Lichtenstein's most expensive work. Scroll down to see which one superseded it!

Find out more about this legendary piece.

This painting is in graphite and oil, and it is made according to a cartoon from 1961, but very cleverly taken out of one context and put into another, in favor of the artist's statement. This one also formerly held records for the highest auction price, and it is considered to be one of his most important works. Having the potential narrative in mind, in combination with the text from the speech bubble, this piece alludes to the autonomy of the artist's work, which is in question since the beginning of his practice with the comic-book genre. The piece confronts looking and being looked at, seeing the nothingness and being able to see. The simplicity of the painting empowers its potential and the meaning it holds, which has been interpreted many times in history.

Find out more about the auction.

Although the girl from the source panel was not sleeping, but actually crying and uttering some words of despair, Lichtenstein's refined protagonist has a bit calmer expression, and is supposedly sleeping. But are we convinced that she is not sad? The compelling, dual undertone typical for Pop Art helped this piece reach the highest hammer price for a Roy Lichtenstein's piece in 2012, and it lasted until 2013. The girl in the painting is tightly framed, and her hair doesn't leave the picture. The Ben-day dots are there to texture the skin and to dismiss any confusion about who made the piece.

And now we're getting very close to Roy Lichtenstein's most expensive artwork ever, but let's take a look at the one that used to hold this place until a while ago. This famous Magna on canvas is based on a painting by Picasso, and it is hard to say which one is more popular today, although this time the original probably holds that place after all, since it is one of the world's most expensive paintings. The Pop Art replica of Dora Maar's portrait is really more than just that. Roy even said, in an talk with Richard Brown Baker, that he sort of treated the original as if Picasso made a mistake when he painted Dora Maar's skin blue. He also changed her hair to yellow, which means blond, since most of his ladies had blonde hair. In the end, Dora Maar becomes one of Lichtenstein's Pop Art beauties!

Take a look at the piece here, and pay attention to the amazing exhibition history.

The painting was initially titled Frightenedness, which had probably been an overstatement because of the obvious concern on the nurse's face. When the new title was given, the undeniable power of a contrast was achieved - one between the woman's worried facial expression and her supposedly courageous and comforting profession. Not to mention her iconic beauty - the painting is visually captivating alone. However, when having its provenance in mind, its price becomes more clear - it was owned by some of the most famous art collectors, including Leon Kraushar and Karl Ströher. It was purchased by an anonymous buyer.

See the whole painting, and the details here. 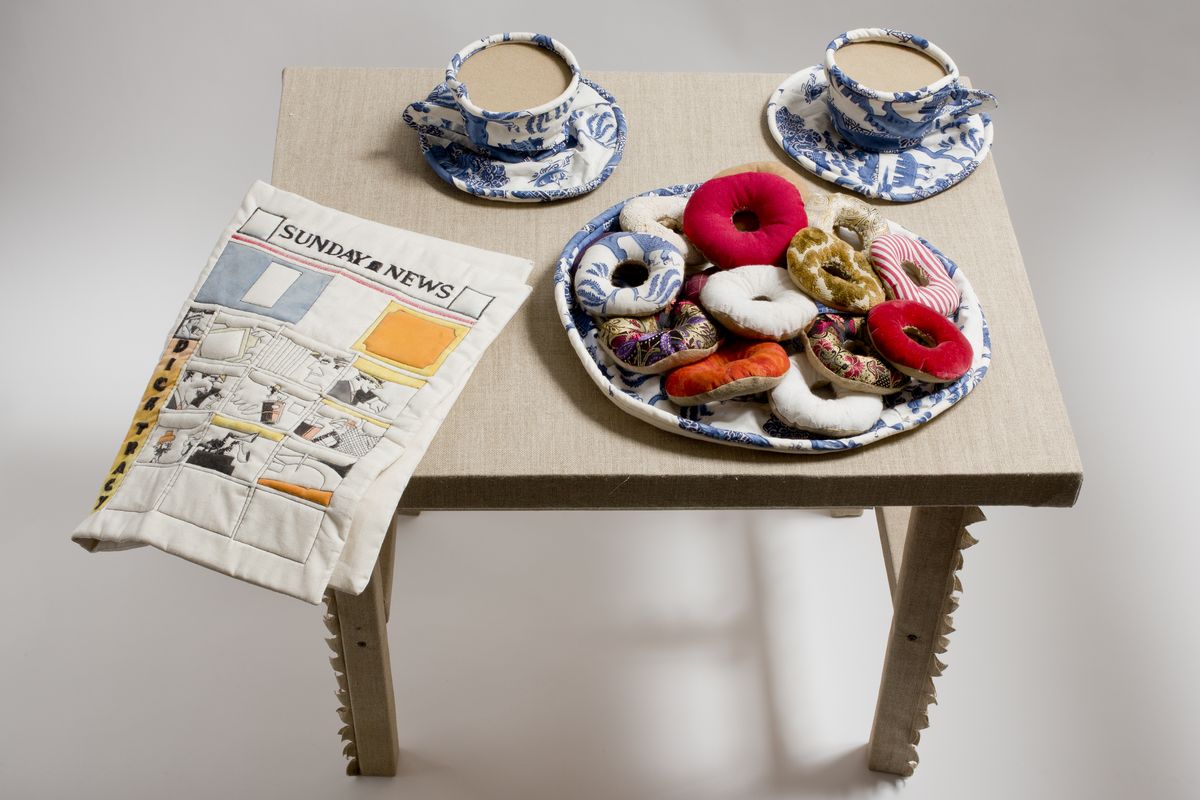