Has Shock Art Become an Obsolete Term in the 21st Century ?

In the late 19th century and at the beginning of the 20th, it was enough to paint a prostitute and the painting would provoke a scandal. During the seventies, with the rise of the performance arts and most notably at the beginning of the 21st century, the aesthetics of shock became possibly the only quality of the art practice. In our times the more obscure, disturbing and offensive art is, the bigger chances are it will be praised for its originality. The art of modernism with its orientation towards ideas and metaphysical entities was discarded by the contemporary society increasingly drawn to sensationalism and exhibitionism. It was the wish of the public to be shocked and challenged, and the artists were responding quickly even if it meant canning the artist’s feces or nailing the testicles to the ground in political protest. And however obscure and distressing it becomes we are surprisingly less shocked and feel like we already saw it before. But why exactly did contemporary art lose its power to shock and scandalize? Are artists to be blamed or the audience got accommodated to the proliferation of disturbing imagery?

How Disturbing Contemporary Art Has to Be to Provoke Reactions?

What Is Shock Art And How It Came To Be?

When we talk about shock art we have in mind those practices orientated towards the depicture of taboo themes, fetishes, disturbing and bleak imagery and controversial ideas, religious, social and political, addressed in the most inappropriate way possible. The origins of shock art are often traced back to the work of Marcel Duchamp and Dadaists, but we can argue that the roots go way back. If we only remember Caravaggio’s The Incredulity of Saint Thomas and his realistic representation of St. Thomas poking one of Christ’s wounds or Goya’s Saturn Devouring His Son which ferociously explores the theme of cannibalism and infanticide. But however shocking their themes or representations, after hundreds of years these works are nothing but masterpieces. The same can be said for the avant-garde movements, the works of Manet or Picasso which raised controversies over their represented subjects, prostitutes most notably. The main concept of any art that tries to create a shocking experience relies on the potential of spectators to be surprised, repelled or disturbed by the work of the artist. But we have moved beyond the point when we get easily offended by a urinal at a museum or a couple of promiscuous women portraits. The question today is: How shocking art can be if the audience has gone numb and indifferent in their perception?

Sensation Exhibition and the Rise of the Young British Artists

The group show Sensation which first took place at The Royal Academy of Arts in 1997 was on various occasions described as one of the most shocking artistic events of the past century. The Sensation exhibition featured artworks from Charles Saatchi’s collection, and among them many of the works by the artists from the YBA group who dominated the UK art scene in the nineties and who gained their respect and popularity mostly because of their use of the shock tactics and distasteful imagery. You should definitely check out some of the works exhibited at Sensation in our choice of top 10 shocking artworks. The exhibition later visited Berlin and New York and it is an interesting thing to note how divergent the public reactions were to particular artworks and the overall atmosphere of the exhibition. Once compared to the different contexts, the exhibition showed how shock isn’t inherently a part of the art piece but a statement about the cultural values of the audience and the pressing social and political issues.

Is It Still Sensational?

We certainly cannot discuss the shocking potential of the art practices without tackling the issues of radical performances. Perhaps more than visual arts, performances have that specific shock value because of their interdisciplinary and interactive nature. In the seventies, performance art became one of the most extreme forms of artistic expression, dealing without exception with the taboo themes of sex, violence and religion. The acts included all kinds of disturbing practices, the introduction of animal carcasses, blood, and masturbation, aggressive and painful interventions on the artists’ bodies that lead many radical performers to the near-death experiences during the acts. Let’s take example of the American artist Chris Burden who was shot in the arm during one of his performances and a couple of years later had his hands nailed on a Volkswagen Beetle or Marina Abramovic who nearly suffocated during the Rhythm 5. Performance acts are often staged with a bigger social or political agenda in mind and shock value is seen as an important tool for reaching the public and opening a conversation. And although these acts truly were shocking in the beginning, with the institutionalization of the field they became less disquieting, less engaging, they became normal and even expected, and the worst thing is - they have lost their power in addressing the social or political issues. So when Japanese artist Mao Sugiyama had his genitals surgically removed and served as a meal to his friends in order to raise awareness of asexual rights his act was seen as another exhibitionist endeavor, not that disturbing as one would expect given the nature of the act itself.

What Is Next Most Shocking Performance?

Why Aren’t We Shocked Anymore?

So why aren’t we shocked anymore and what is the next thing the artists can invent to give us that specific feeling of excitement and surprise that we have learned to expect, without anyone putting his/her life on the line, losing a limb or hurting the intimate parts for the sake of art. Has shock art become an obsolete term? Did we became "unshockable" or it has to do with the fact that shock art has become mainstream, highly popular and valued if we consider its position on the art market. Is shock still perceived as a thing of the obtuse middle classes, as some critics may suggest and a contextual phenomenon where a shocking potential depends on the spectators’ choice to be offended or provoked. On the other hand, we are daily witnessing some of the most traumatizing historical events and arguably we became immune to shock, violence and controversies. So our final question is: Can we still be shocked by art? Well, we probably can once put down our intellectual and ironic shields and take a more genuine and forthright approach to those artworks that are cleverly and originally using shock as a weapon of choice.

Create your profile via My Widewalls for FREE and don’t miss our next discussions and art related topics! 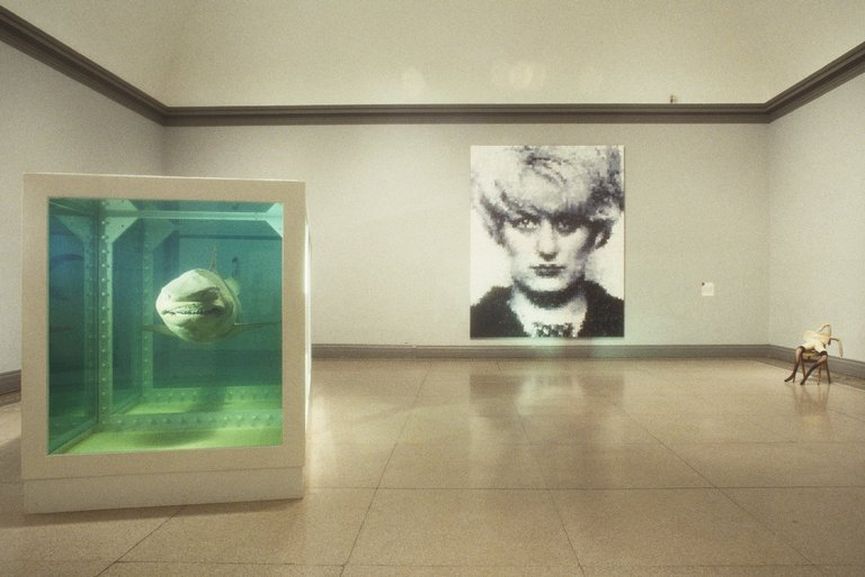 Why were the late 1990s marked by the Sensation art exhibition, which took place in both the UK and the US? Who were the exhibiting artists and what did they show? 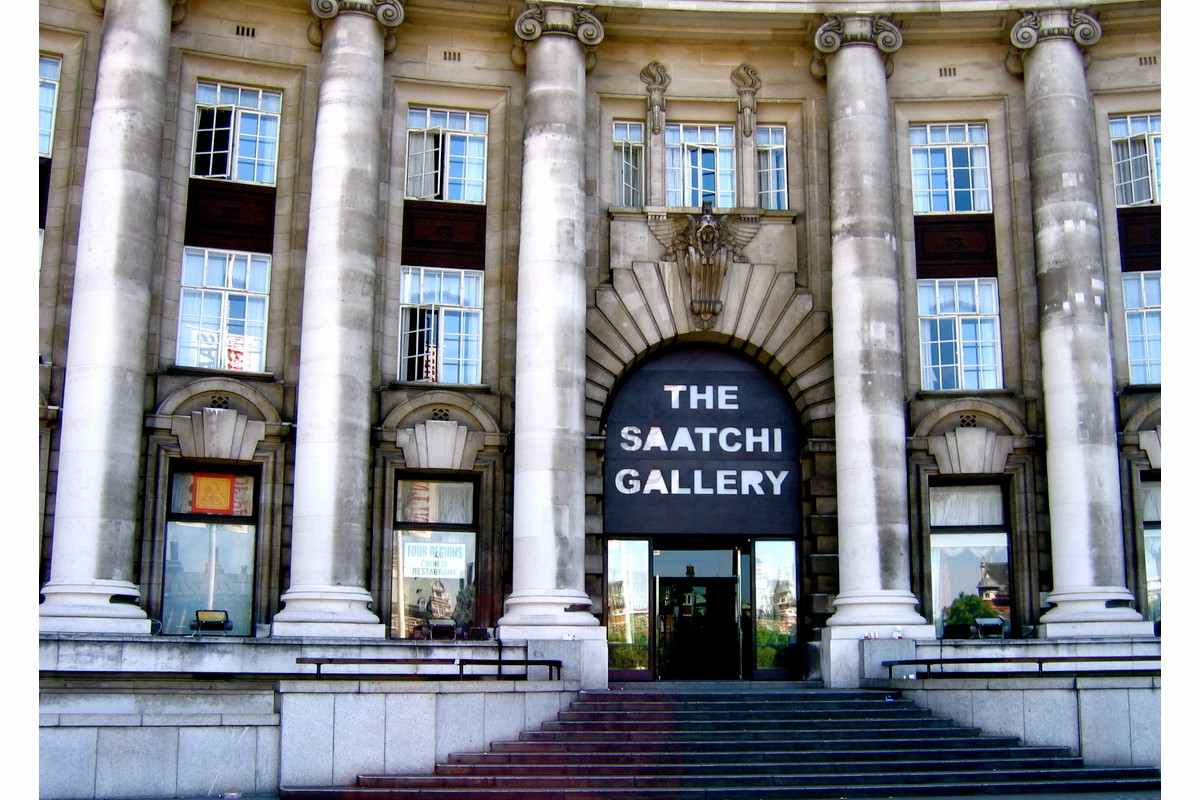 Charles Saatchi is the founder of Saatchi & Saatchi advertising agency and the leading figure of the art world who redefined the meaning of patronage. 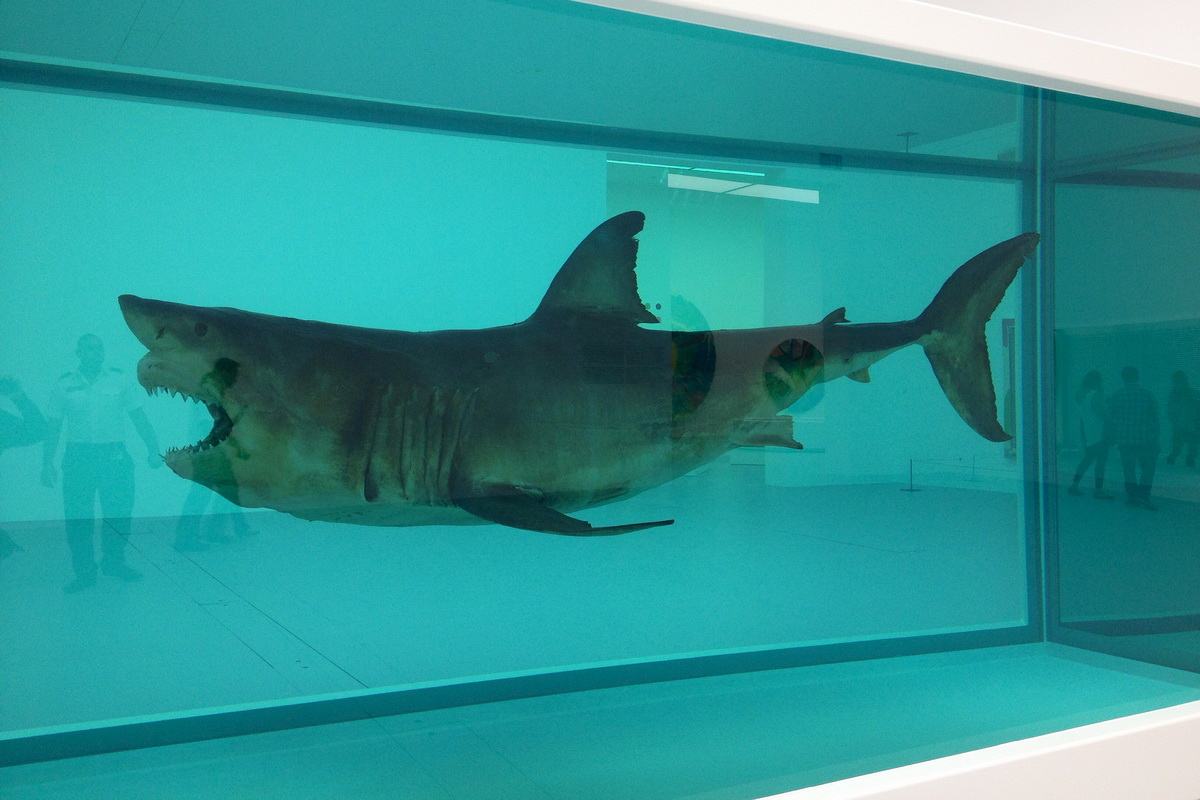 The iconic and provocative work The Physical Impossibility of Death in the Mind of Someone Living, or The Shark, was produced by Damien Hirst in 1991.