A look at the legendary King Robbo graffiti

A short while back we published the first in our series of street art legends, featuring the work of Jean-Michel Basquiat, which you can catch up with in Street Art Legends: Best of Basquiat Art. This time street art legends moves across the Atlantic, to the streets of London, once home to the late King Robbo. A true legend in the British underground graffiti scene, King Robbo was without doubt the polar opposite of everything that surrounded the life of Basquiat, a family man with a son and two daughters, uncomfortable with the idea of commercial art galleries and a man who found the appreciation of his art rising on the art market amusing. King Robbo created his first graffiti crew in 1984 and painted his first London train in 1985 and for King Robbo, graffiti was never about money or fame, but about freedom, creativity and making art where it is was not supposed to be. The name King Robbo became an iconic sight around London, painted onto walls and trains, along with his crew Team Robbo, consisting of King Robbo, Choci-Roc, Doze, Fuel, Prime, P.I.C. and Pranksy. Then there was the infamous graffiti war with a character called Banksy, resulting in various arguments and many graffiti works being painted over or altered. With King Robbo about to enter the art gallery world in 2011 with Team Robbo – The Sell Out Tour at Signal Gallery, the legendary graffiti artist suffered a head injury which saw him slip into a coma from which he never recovered. King Robbo died on 31st July, 2014 aged 44, more of which you can read about in The Death of Banksy’s Rival.

An Artist in Traditional Sense

King Robbo was very much a graffiti artist in the traditional sense, aiming to put graffiti in those places where it shouldn't be. This is a perfect example of a King Robbo piece in his signature style, created next to railway lines with his name proudly displayed for all to see. The rail routes into various points of London were regularly covered in such graffiti and tags, with much of the thrill existing in getting to these locations to create the graffiti without being caught. Check out the article History of Street Art in the UK

King Robbo was in the original wave of graffiti artists in the UK to start leaving their creations on trains. 1985 saw King Robbo first paint a train, a moment that became a landmark in the history of graffiti in London, before creating the infamous Merry Christmas train with Drax WD in 1988, leading to a spot on the national news and in national newspapers. This early example of King Robbo train graffiti shows the influence of some of the original American graffiti artists, of which you can read more about in 20th Century & the Rise of Graffiti.

The love of making graffiti on trains eventually led to this iconic and infamous collaboration with Drax WD. King Robbo and Drax WD joined forces to create the now famous Merry Christmas Train in 1988, the results being released to the whole of the British nation via the national ITV news and the Independent newspaper. While we may have got used to seeing our world being surrounded by graffiti and street art, one has to remember that back in the 1980’s it was probably largely seen as an outrageous act of vandalism by hooligans! Read more on street art vandalism in Food, Sleep, Sex and Revenge.

With the transitional nature of graffiti and street art, it was not uncommon for King Robbo works to vanish or be covered up at some point. However, this particular piece was created on a wall next to the canal in Camden, a spot that could only be approached by water, which saw the iconic graffiti piece remain intact for quite some time, with minor additions from taggers. This is also the King Robbo graffiti that sparked the infamous graffiti war with Banksy, the new rising star of the graffiti world breaking one of the unspoken rules of street art and painting over the iconic piece!

When Banksy decided to add his more commercial style of street art over the iconic piece of graffiti art by King Robbo by Camden Canal it sparked a huge feud between the old school and new school of graffiti art. Banksy added a figure apparently pasting wall paper over the iconic piece of graffiti art, which resulted in the two street artists returning to the piece in a constant battle to outdo each other. King Robbo returned to add his name to the piece, which Bansky again added to and so on. The feud managed to gain many new fans for both of the graffiti artists and resulted in a TV documentary about the artistic rivalry.

Whether the King Robbo Vs Banksy feud was real or not, both graffiti artists gained much publicity and gave birth to much new graffiti by King Robbo and his Team Robbo Crew, often aimed at Banksy or defacing the works of Banksy. This classic Banksy is Not the Messiah, He’s a Very Naughty…a quote taken from the classic film Monty Python's Life of Brian, shows the down to earth humour of King Robbo and the classic direct style of his graffiti art. Shortly before his accident, it was rumoured that King Robbo passed up his last chance to paint over a piece by his rival, thinking it would be seen as a stunt rather than just for his usual enjoyment.

King Robbo belonged on the streets, free to create his iconic graffiti art where he wanted, away from what he saw as the commercial aspects of street art in galleries that came with the rise of Banksy. However there are examples of artworks produced by King Robbo and Team Robbo to satisfy those who wanted to own their own piece of King Robbo graffiti art, such as these CND Petal flowers that combine politics with the obvious enjoyment of adding vibrant and gestural splashes of graffiti style paint, which preserve the essence of street art.

Green King and Pink King are perhaps signs of where King Robbo was headed with his graffiti art before his untimely accident. These were produced and exhibited at The Team Robbo Sell Out Tour exhibition in 2011, depicting the distinctive King Robbo style graffiti writing below a crown. The six colour prints were sold in stamped editions of 25 and perhaps signalled a change in his attitude towards showing graffiti art in galleries. For more on how street art has changed since the turn of the century, read Graffiti Hits the 21st Century.

Another fine example of where the graffiti art of King Robbo may have headed towards are these Hop Lips images. The imagery appears to be a loose borrowing of the infamous and classic lips and tongue logo used by the Rolling Stones, but transformed by the unique rendering of King Robbo. It is fair to say that in terms of fine art imagery King Robbo was not a great artist, but works such as these reveal his true love of graffiti art and his dedication to just being creative. King Robbo will be remembered for his love of art and recognising that is can affect our senses, minds and hearts.

Visit Team Robbo for further information on the crew.

For all the latest graffiti news, sign up to My Widewalls today. 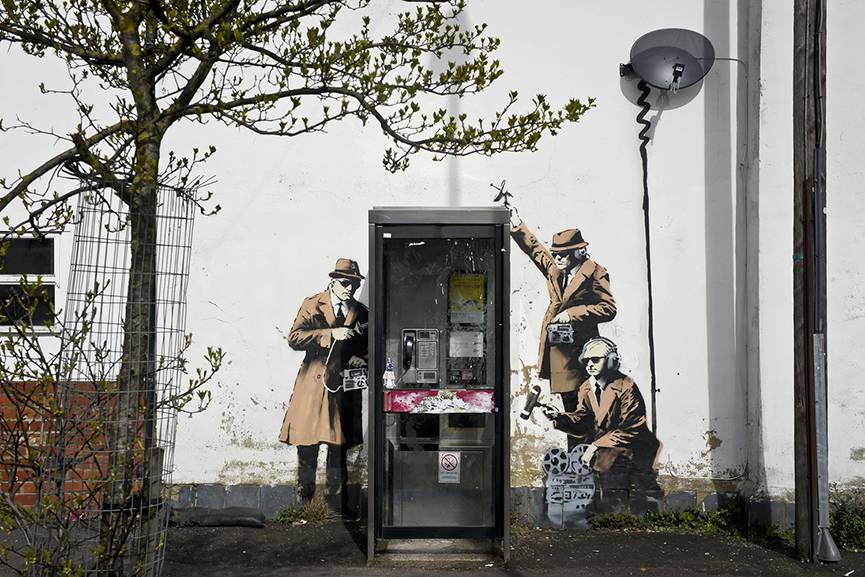 Just Let Banksy Work - Our Artist of the Week is Stirring Up Spirits Again. Unvoluntarily.
Artist(s) in Focus   |   Eli Anapur

Banksy’s work has attracted enormous public attention. This article analyzes the background of such interest with a help from critical theory. 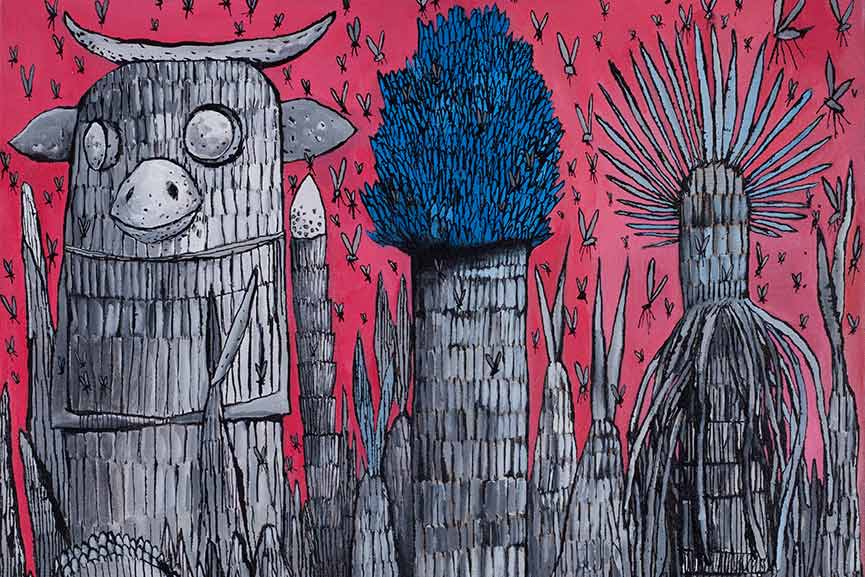 The joined exhibition Baraka at Galerie Celal is a mesmerizing mix of urban art and phantasmagoric dreamlike worlds of Max Tetar, Bault and Popay 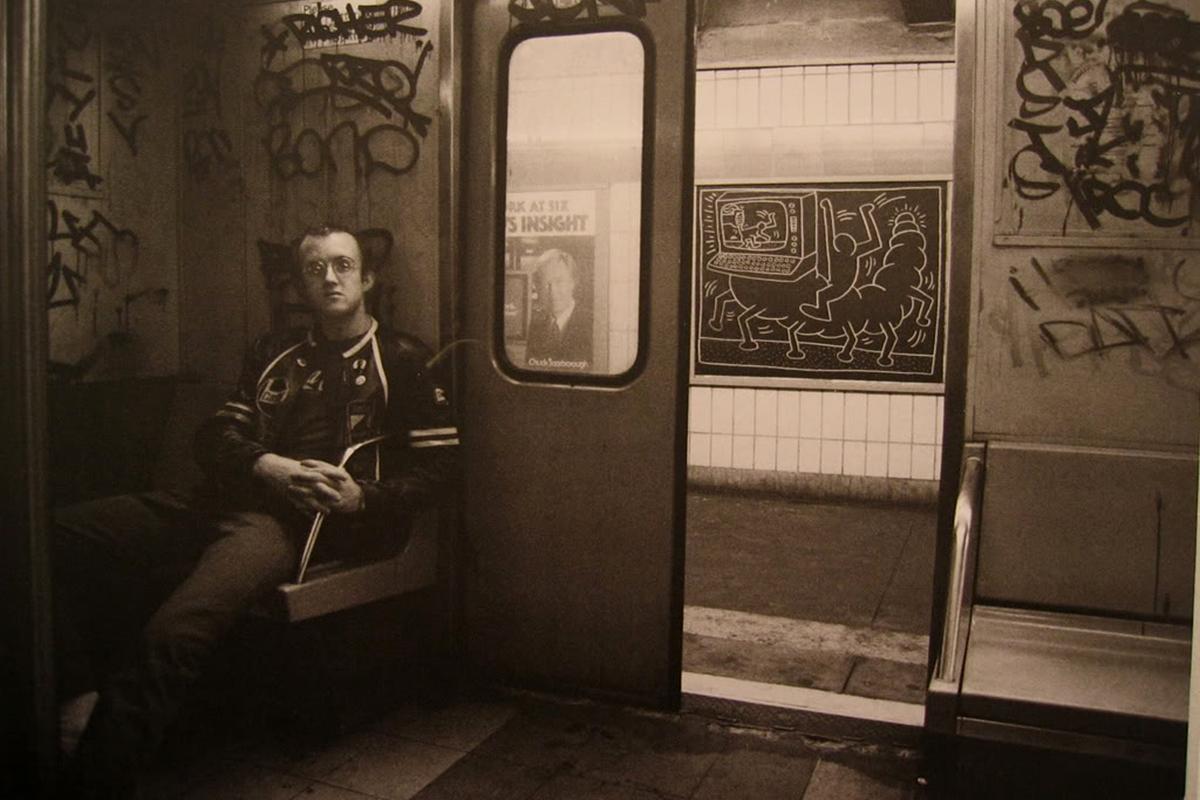