Street art and crisis are tightly connected. Remember Guernica? The most famous painting of Pablo Picasso was created as a direct reaction to the horrors of the Spanish Civil War. Dadaist anti-war, anti-art ideas? What about Dali’s giraffes, birthed in anticipation of the Second World War, or the continental artistic depression born in France called Informel? All of these works, modernist pictorial answers, and avant-gardes were a direct result of social tremor, which disrupted entire countries, continents and the world. Upheaval has proven itself one of the greatest incentives for emergence of fresh artistic expressions, and since wars and revolutions were so frequent throughout the past century, one of the most common.

Postmodern age brought vast pluralism and democratization to the arts, while consumerism blossoms, rendering large population groups lazy or disinterested. Information bombing, hyper-production of everything, including art, saturates the contemporary eye, leaving little room for true rebels, brilliant progressive thinkers or just convinced and eager creative enthusiasts to really make a change in the little-bit-stale art world. However, in places where the crisis hit harder than ever, leading the state to the verge of bankruptcy, new art appears, as a response, commentary and critique to the ruling establishment, and the emblem of people’s dissatisfaction.

Cradle of the Western Civilization

Being one of the countries most troubled by recession, Greece developed a booming street art scene in the recent years. Millions of Greeks were impoverished due to the debt crisis, left without social security and health insurance. The worsening situation drove a new army of graffiti artists to action,  and they started depicting their visions of hope and decline over Athenian walls. Decayed urban corners become the perfect canvas of the this gifted generation whose many members lost their jobs as a result of country's financial disaster.

The five-year collapse produced hords of the unemployed, allowing for plenty of time for the Athenians to creatively express their discontent. As expected, some regard graffiti as vandalism, but the most imaginative tags, throw-ups, paste-ups, stencils and murals are in fact much more - they are the expression of the era, the testimony to the spirit of community ruling over the Greek capital. Street artists in Athens are daring, since the police has other work to do, catching dangerous political elements, such as members of the extreme right Golden Dawn party. Not getting arrested often, they paint where they like, as they like, sometimes even on the ruins of Acropolis. Still, most of the street art activity is concentrated on the working-class neighborhoods, where anarchists dwell along with visual protesters. Rebellion, revolution, change, and future are the core substances contained in the messages delivered by Greek street artists, such as INO, Cacao Rocks, MaPet, Bleeps, Absent or Paul.

Street raider since 2000, INO actually possesses a degree in Fine Arts, like many of his countrymen and colleagues. He is probably the most internationally known Greek street artist, creating across the planet. His murals composed of realistically depicted human elements, often black and white in color, portray the current situation in the country with in a grim tone, while inviting people to “Wake Up”. His iconography includes often two-faced characters, of which one gazes upwards, into the future, while the other one is bound to reality.

Cacao Rocks wanted to teach French literature for a living, but when the crisis struck, he turned to street art. Occasionally, he works in his studio and on commission, but most of his activities are illicit, especially in neighborhoods with a lot of poor and unemployed people. He addresses crisis from a different angle, depicting vivid and joyful scenes, abundant in color, to give hope and alternative view on life.

Cacao Rocks frequently partners with Thisisopium, wearing a mask, with whom he recently executed a clear and potent tag saying simply LATHOS, in Greek - ‘wrong’.

Mapet is a dentist. He worked as a dentist until his business went under and he was left with only a cavity drill in his hand. He put his professional tool to a completely different use, carving his first stencil with it, and he has been stenciling across Athens since. His intuitive first piece was a masked man throwing a fire bomb, Mapet’s way of opposing the propaganda and instigating critical thought in his environment.

Flourishing street art scene in Athens is a direct reaction to crisis and it’s hard not to notice work of the writers - they are everywhere. Their pieces range from abstract and escapistic, to violent anti-Fascist, grotesque, while all of them denounce the artificial power of politicians and bankers. Techniques are many, from murals to stickers, through which Greek guerilla artists fight capitalism and exploitation.

When graffiti becomes commissioned art, it loses its social power, is the claim of Amalia Zeppou, a woman who became the adviser to the mayor after taking an action of ‘guerilla gardening’ in her own neighborhood. She is in charge of preserving the city's street art riches, and transforming Athens into a huge exhibition space. Although believes commissioning art is the sign crisis is in decline, a lot of street artists disagree, considering this the means for the politicians to influence what is going on in the street.

Street art as a model for political protest is reaching its high point in another troubled location in Europe - Ukraine. Maidan square in Kiev is the central spot, not only for the ongoing Ukrainian Revolution, but for a completely new artistic expression. Graffiti around the square began as the visual critique for the Viktor Yanukovych regime, continuing into the anti-war and largely anti-Russian, or rather anti-Putinian, iconography, demonstrating against the aggression upon Crimea.

Styles of the Ukrainian contemporary graffiti is eclectic, ranging from stickers, or tags, to murals, sometimes including elaborate stencil work. Rooted in the Eastern European imagery, references of these pictures can be found in Soviet art, as well as in the pop-iconography of the 20th century. Putin is, for example, portrayed as Hitler, the epitome of evil in today’s Kiev.

One of the artists eager in advocating change in Ukraine is Jerzy Konopie, who signs his street work with an E (like euro and Erzhy) and stands behind multiple creative changes in his environment. His strategically placed “Targets” around the Maidan square attracted a lot of attention, tuning up the voice of the people and highlighting their role as victims in the clashes.

Kiev protests started off as a peaceful, rapidly escalating into conflict. The situation in Crimea only dramatized the already critical situation, while creative circles exploded in conjuring hundreds of engaged messages throughout the city. Most of them bear anti-war symbolism, while being used as a visual weapon, the most obvious picture of civil disobedience provoked by injustice and oppression. 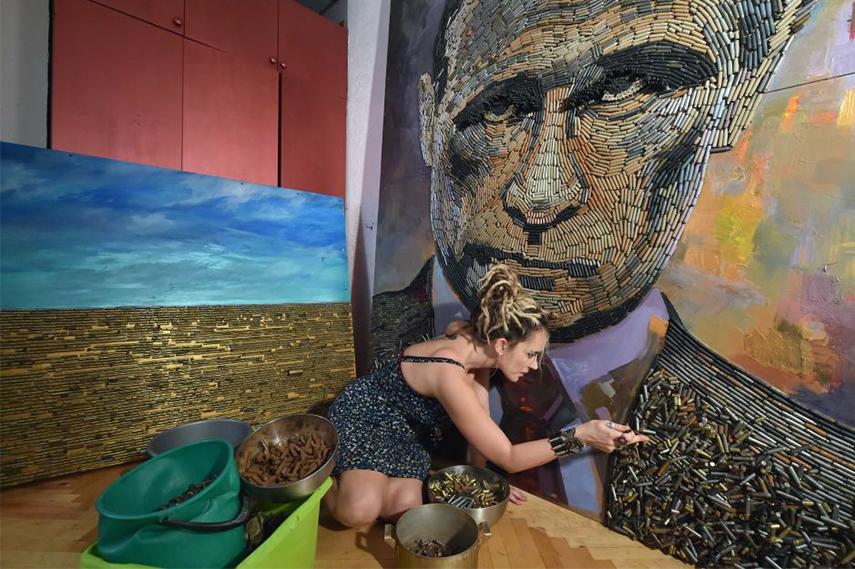 Lit Up by Social Distress

Observing the situation in Europe, it’s evident street art is used as to express the desire for the better in transitioning societies or wherever there is a social outbreak. Criticizing the government and the system, it advocates progress, the relief of the angst that has been pressing against the population psyche too hard, or for too long.

Street art thus rose from the realm of self-promotion or urban embellishment, becoming a seriously engaged art movement based on solid humanistic values, a mirror of social will and voluntary culture.

Everything you need to know about your favorite artist is one click away with a FREE sign up for My Widewalls!