This week your selection of murals offers an impressive array of styles, execution, imagery and the human race. The first mural in this weeks selection names man the greatest predator there is, even in comparison with one of the most dangerous animals on earth. The second mural on the other hand shows us the destructive power of man in a humorous and witty way that reminds us that we are not only instinctive predators, but also intelligent beings that strive for happiness. The third piece shows us the sad sides of our everyday life. The fourth street artwork shows just how weird we can get. And the fifth and final mural shows us just how artistically brilliant humans can be.

iNO is arguably the most famous street artist from Greece. His latest piece iNO created for the Asalto Festival in Zaragoza, Greece definitely supports this claim. The monochromatic mural depicts a man and a bald eagle staring fixated in one direction. The figurative piece is segmented in shaded geometric abstractions that give the piece a rough appearance that is characteristic for the Greek muralist’s work. The imagery and execution work in perfect harmony with the murals title “Predator”. The title and larger size of the bearded head also indicates the perception that man is the greatest predator of all: Even more cunning and fearsome than the majestic bald eagle.

Similar to iNO, Levalet’s reputation exceeds him. The French street artist Charles Leval is known for incredibly witty and incorporative street art pieces. After having demonstrated his skills not only on the street of Paris but also in Stavanger at NuArt is Levalet has now returned to his hometown to catch up with his growing name in urban art. The first big step since NuArt Festival  the signature black and white weat paste up entitled Palimpsest. A palimpsest is a scroll- or book- page from which the text has been erased in order for it to be used again. The more current usage of the word relates to the scenery that Levalet created. In architecture a palimpsest can also be a scrapped down upper layer of a wall so the older layer can be used again. Levalet’s wheat paste construction worker is seemingly chiseling this upper layer to reveal the palimpsest beneath.

British urban art superstar, StolenSpace gallery owner and multi-faceted entrepreneur D*Face is returning to what he does best and what made him the man he his today: Street art. Comparable to Banksy’s “Better Out, Than In” residency in New York, D*Face selected the Los Angeles to create and present 30 murals. The works that are unmistakably the Roy Lichtenstein infused D*Face pieces contain the characteristic pop-art imagery that D*Face masterfully reinterprets with cartoonish bone and skull elements as well as more current and provocative exclamations: “You’re Dead To Me”.  The equally titled mural in our selection this week is one of the 30 pieces that D*Face created for the Scars & Stripes exhibition the British artist will unveil on September 27 in West Hollywood.

Vidam is a member of the German-Austrian Weird Crew. As such he is an unbelievably talented street artist with a knack for cartoonish weirdness. His latest piece in North-Western Bosnia however, shows a more subtle and dreamlike presentation of his skills: Less weird and more contemporary graphic aesthetics. Vidam’s “Transformation 0.6” shows a faceless stuffed bunny on a horse jumping through a light-blue kite-shaped portal. The gate into another dimension transforms the pair from geometric and straight-edged into organic beings with rounded curves and camouflage patterns. The 60% transported bunny and the horse jump over a miniature mountain landscape with the sun descending behind it, to add to that little bit of weirdness we want to see.

The unbelievable, magnificent and extraordinary Brazilian muralist Eduardo Kobra is partaking in the Poland’s Urban Forms Festival in Lodz. His contribution to the festival and the streets of Lodz is the Polish-American pianist Arthur Rubinstein. The most skillful interpreter of Chopin appears in vibrantly colored triangles and squares on the left hand-side and equally colorful piano keys on the right hand-side. This way Eduardo Kobra always breaks the grey-scale of his photorealistic portraits. The astonishing finesse with which Kobra paints realistic resemblances of people in combination with the striking colors arranged in kaleidoscopic geometry are what make the Brazilian artist and especially his murals stand out. 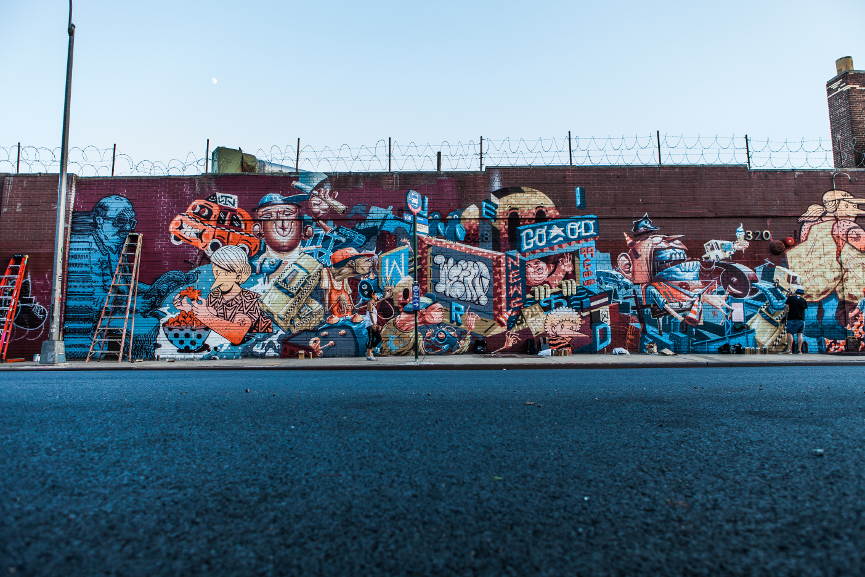 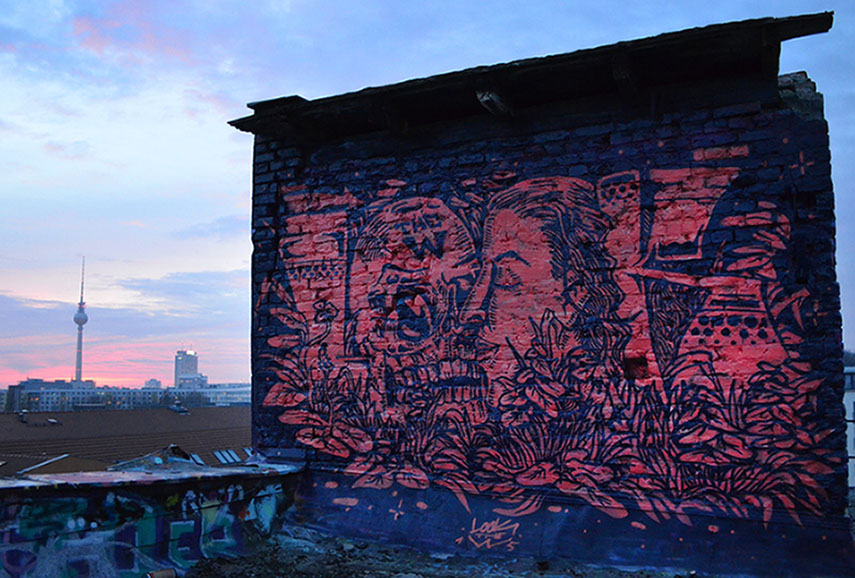 Within days a Hamburg gallery is going to host exhibition of three WEIRD Crew members DXTR, Look and Vidam-The Haul. It represents a continuation of their exhibition with the same title that took place in Amsterdam in 2011. 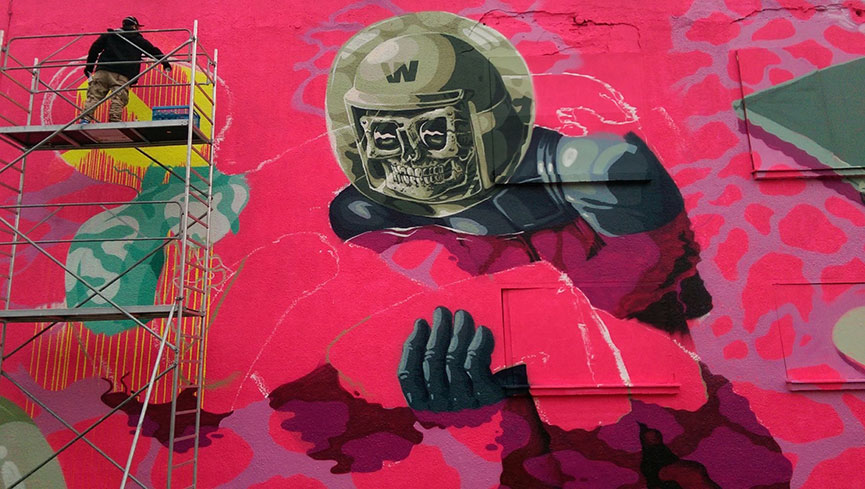 Peachbeach at the Spree
Maximilian Braun

For the winter group show at Urban Spree Vidam and LOOK of the Weird Crew invited several graphic designers but also urban artists to exhibit alongside it each other.