The Energy and the Unconventionalism of the Irascibles

After ending a five-year-long agreement with the Whitney Museum in 1948, under which the Whitney collected avant-garde American art and the Met collected what was considered “classical American art,” the Met announced it would form its own Department of American Art. In an effort to do so, the museum organized a national competition to select works to be included in its monumental exhibition titled American Painting Today.

A group of 18 American artists, which would later become known as The Irascibles, signed an open letter protesting the museum's juried exhibition, claiming that the selected jury was “notoriously hostile to advanced art” and had demonstrated a clear bias against “modern painting”. These artists would soon become faces of Abstract Expressionism. After sparking a subsequent barrage of media attention, the group, despite coming together, struggled against the idea of unity.

The Vittoriano - Ala Brasini brought together seminal works by the representatives of the New York School, drawn from the collection of the Whitney Museum in New York. Titled POLLOCK e la Scuola di New York, the exhibition brings together around 50 masterpieces by artists such as Jackson Pollock, Mark Rothko, Willem de Kooning and Franz Kline, highlighting the energy and the unconventionalism that made them the unforgettable Irascibles. 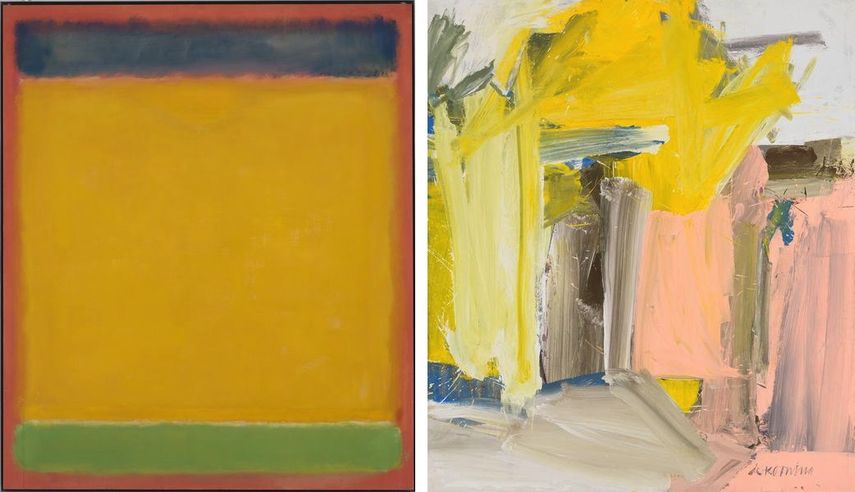 At the time, many of the signatories, now considered the most influential artists of their generation, were struggling to make ends meet, as the only galleries that were prepared to exhibit them had closed as a result of the financial strain. Pollock, who had appeared on the cover of Life Magazine in 1949 in an article titled, Is He the Greatest Living Painter in the United States?, was the only one making money from his art.

Entitled Open Letter to Roland L. Redmond, who was then President of the Metropolitan Museum of Art, the letter appeared on the front page of the Times. The letter stated that the signatories would boycott the exhibition, protesting the choice of jurors.

We draw to the attention of these gentlemen the historical fact that, for roughly a hundred years, only advanced art has made any consequential contribution to civilization.

The letter gained a great deal of media attention and encouraged a heated polemic. This included a feature by the art critic Emily Genauer published by The Herald Tribune, who was the first to describe the group as The Irascibles.

From The Irascibles to Abstract Expressionists

In 1951, Life magazine published a feature which compared the signatories to when “French painters in 1874 rebelled against their official juries and held the first impressionist exhibition,” accompanied by a photograph of The Irascibles taken by Nina Leen. While many of the artists, including Jackson Pollock and Willem de Kooning, demonstrated concern with being grouped together, the members gained attention and the media coverage coined and popularized the term Abstract Expressionism, which was previously used to describe Pollock's work.

Artists showed discomfort with being labeled together, and over time, relationships between them had deteriorated. However, the label remained. In 1978, B.H. Friedman wrote for Arts:

Despite their subsequent labels as Abstract Expressionist, action painters and so forth, this is a picture of a group that never was a group, a picture of fifteen individuals, unified only by the click of a camera at a particular time and place.

Sections of the Show

Titled Jackson Pollock, the first section of the exhibition features the works of an artist who was once described as the first American artist. Working in his New York studio, he discovered dripping, a completely new way of painting which represented a mix between the rituality of a primitive Indian dance and the modernity of pre-performance art. Among highlights in the show is his iconic painting Number 27, a monumental canvas featuring a masterful balance between strokes of black and fusion of lighter colors.

Titled Towards the New York School, the second section explores the works of a loose association of vanguard artists working in New York City during the 1940s and '50s, many of whom are featured in the famous photo of The Irascibles taken by Nina Leen in 1950. It features artists such as Arshile Gorky, William Baziotes, Robert Motherwell, Clyfford Still, and Richard Pousette-Dart.

Exploring the work of an artist who, along with Pollock, Rothko and de Kooning, is considered one of the great artists of the New York School, is Franz Kline, the third section. Getting involved with Action Painting in the 1940s, it was there that Kline began his painting revolution. His large-scale paintings featured stark, full-bodied lines, shaped from black and white and, more rarely, in other colors.

From Abstract Expressionism to "Colour Field" Painting, the fourth section explores the move from the vigor of Abstract Expressionism to the dematerialization and flatness of Colour Field painting. Some of the artists featured are Ad Reinhardt, major female players such as Lee Krasner, Helen Frankenthaler, and Grace Hartigan, but also Jack Tworkov, Theodoros Stamos, Al Held, Adolph Gottlieb, Philip Guston, and Sam Francis.

Titled Willem de Kooning, the fifth section is dedicated to an artist whose work was close to Action Painting, but who was never fully an Abstract Expressionist. Although abstract, his compositions often maintained the presence of easily visible realistic elements. His canvases were characterized by violent brushstrokes and sharp colors.

The final section of the show, Mark Rothko, is dedicated to the most famous artist associated with the Color Field painting. His compositions are characterized by sweeping strokes of color which trace bright, vibrant rectangles, eliciting a moment of contemplation and silence. In contrast with the chaos of the gestures and markings of Abstract Expressionism, he proposed a more lyrical and mystical approach.

The Irascibles at the Vittoriano - Ala Brasini

Characterized by anti-conformism, psychological introspection and experimentation, the works which emerged from the New York School broke from the past and from the status quo. The exhibition at the Vittoriano - Ala Brasini aims to not only rediscover the fascination of this movement through art but also to relive the emotions and feelings of those artists who made their era unique in all of art history.

Curated by David Breslin and Carrie Springer along with Luca Beatrice, POLLOCK e la Scuola di New York will be on view at the Vittoriano - Ala Brasini in Rome until February 24th, 2019.