The SuicideGirls, a Los Angeles-based alternative pin-up community SuicideGirls, gave Richard Prince a taste of his own medicine by re-appropriating an image that he appropriated from their Instagram and sold through Gagosian Gallery at the New Portraits Show for about $90,000

The SuicideGirls weren't the first to react to Prince's Instagram appropriation art. The model and cosmetics entrepreneur Doe Deere addressed the controversy via Instagram about having her image used without her permission. However, the SuicideGirls canvases are on sale for $90 (which is approximately 99.9% off the Prince price).

But who are the Suicide Girls? The online community was founded in in Portland, Oregon, in 2001 by Selena Mooney (aka Missy Suicide) as "an alternative to the mainstream media's obsession with the silicone enhanced Barbie dolls and the incredible shrinking starlets," according to the website.

SuicideGirls features pin-up photography and profiles of alternative female models who are known as the "Suicide Girls". The site functions as an online community with member profiles, member blogs and the option to join networking groups based upon interests. SuicideGirls also features interviews with people from popular and alternative culture, user-submitted news articles, video, photos and an online merchandise store. If you want to join and have access to most of the site it requires a paid membership.
Unlike other pin-up sites, SuicideGirls emphasizes not just the enviable looks of their starlets (who tend to be young, curvaceous, and heavily tattooed), but on developing and emphasizing their personas. Their message behind it all is that being brainy and being attractive are not mutually exclusive.
The Suicide Girls started in the early days of online communities. It's been the Prince photos that put them back on the map.

The current SuicideGirls burlesque tour is called Blackheart Burlesque. Here you can see the one or the other model live on the set. They have completed two US tours, two tours in Canada, a tour in Australia and special dates in the UK. Several of the dancers are just dancers, while a few of them become official SuicideGirls with photosets on the site. The tour is choreographed by Manwe Sauls-Addison who creates the live set. You can find more videos from their burlesque shows on their Youtube Channel

Missy engaged in a seven hour Reddit "Ask Me Anything" question and answer session, where she received some flak for many of her own business practices on her website, including an alleged non-compete clause for featured models.
Mooney has also stated that the purpose of the site is to give women control over how their sexuality is depicted. Several questions were also posed regarding allegations that models are paid low wages, and that in the past, photos have been sold by the company to other websites without the model's permission. Missy did not respond to any questions mentioning these allegations. 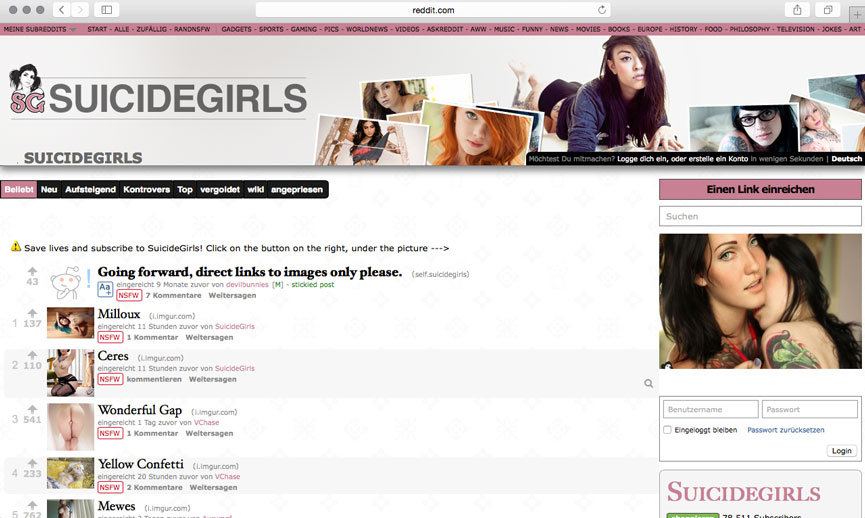