Eli Anapur
Eli Anapur is a pseudonym of Biljana Puric. A staff writer and editor at Widewalls, Biljana holds Master’s Degrees in Film Aesthetics from the University of Oxford, and Gender Studies from the Central European University. She has published academic articles as well as art and film reviews and criticism in New Eastern Europe, ARTMargins, the Journal of Curatorial Studies, and Short Film Studies; she has also contributed illustrations for Argus Magazine.

Inspired by a variety of sources from medieval period onward, Niels Shoe Meulman is among few artists who have their own style and art form described by new term. In Meulman’s case it is Calligraffiti – a term that stands for a combination of graffiti art and calligraphy. Black and silver being his dominant color of choice, Meulman’s calligraffiti soon became his staple format that attracted international attention and became a worldwide phenomenon.

In recent years Meulman’s work has moved away from limited palette towards increased use of color and, as it is evident from his recently opened solo exhibition Uncontrolled Substances in Amsterdam, towards abstraction as well. His precision of execution and manual skills so crucial in calligraphy and graffiti art, gave in to freely applied brushstrokes that seem uncontrolled, or even uncoordinated. This free play of forms is enhanced through the artist’s use of fake plants instead of brushes, in his search for unconventional and accidental effects. Another important aspect of his new approach to formal language is looseness or lack of firm frame for his canvases that are left to fold naturally on the walls, and under the layers of paint. Metallic and iridescent colors capture the viewers with the dynamism and tonal changes that follow the folding of the fabric.

Being in his own words a part of “something that transcends time and gives… energy to continue”, Niels Shoe Meulman in his interview with Widewalls talks about his beginnings, process of creating his art, influences, future plans, and art market in general. 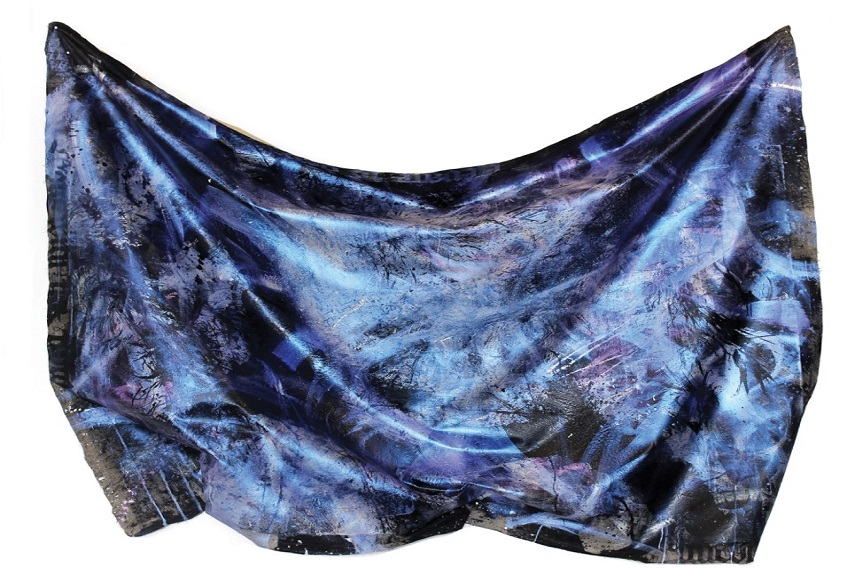 Starting Out in Art World

Widewalls: Can you tell us something about your beginnings as an artist? How and when did it all start? What was the art scene like in Amsterdam in that period?

Niels Shoe Meulman: I am born, raised and based in Amsterdam. In the late seventies, early eighties there was a huge graffiti scene in Amsterdam which was rooted in a strange mix of subcultures; punk bands, football hooligans, and squatters. I was one of those kids that made a transition from that scene when hip-hop came along and met with advanced counterparts from New York like Dondi White, Rammellzee and Keith Haring. That’s when it all started for me. I never went to art school, but did get educated in graphic techniques like lead letter press and screen printing.

WW: Who are your biggest influences; people, movements, styles you looked upon while establishing your visual language?

NSM: On a popular and conceptual level I think it’s amazing what bigshots like Warhol, Hirst and Koons have achieved. Creating an intellectual oeuvre that appeals to the masses isn’t easy. I also enjoy watching the art market in all its extravagance. On a painting level, I love the organic strokes, graphic boldness and visualized freedom of abstract paintings by artists like Soulages, Twombly and Wool. Gutsy and sensitive at the same time.And then there is the art of writing. Ancient Japanese and Chinese ink drawings, Arabic calligrams, and illuminated books from early medieval times. The good ones mastered their craft so well, that it shows an ease I find very appealing. Without consciously trying, there’s always some of that in my work.

On Contemporary Market and Artists

WW: About ‘watching the art market in all its extravagance’… can you elaborate on this? Can you tell us more about your take on market-artist relations? Do you think that market influences artistic choices, especially of a younger generation of artists?

NSM: Just like many of the disciplines that shape today’s world economy, the art market too, has been demystified. About 40 years ago Beuys said ’Jeder Mensch ist ein Künstler’, with the graffiti movement being the immediate proof of that. And now, in our networked society, this also goes for former elitist professions such as art dealer, publisher, stock broker, curator and gallerist. It just means that anyone who’s smart and ambitious can enter the worldwide arena of contemporary art. Game on!

Whether artists let themselves be influenced by the promise of quick money, probably has to do with the artist’s personal needs. It took me a long time to take my painting seriously. Only at age 40 I started to value my own work.

WW: Who are contemporary artists whose work you find engaging?

NSM: I try not to look too much at other peoples work. It can be a distraction. Recently I discovered the complete works of Hans Hartung. Damn, there are so many similarities in our work, only he was born in 1904 and that can feel depressing. Then again, it also makes me feel part of something bigger, something that transcends time and gives me energy to continue along my own path. My contemporaries who are (literally) close to me are Adele Renault, Nik Christensen, Paul Du Bois-Reymond, and Boris Tellegen. And some of the Calligraffiti Ambassadors who are featured on the Calligraffiti Facebook page, are amazing painters.

Influences and Style – From Calligraffiti to Inclusion of Color

WW: When you talk about different influences on your work – from Western artists, Chinese and Arabic calligraphy, to medieval illuminated manuscripts. How your Calligraffiti came to be shaped within such an axis of influence?

NSM: I think that has to do with time. Basically I’ve kept my eyes open and my mouth shut until I was 40 years old. In 2007, I felt it was time to come out with a mix of all the flavours that I had gathered from experiences, exhibitions, books and travels from earlier years.

WW: How would you describe your style in terms of techniques, mediums, materials you use etc.?

NSM: Even in the early days of urban painting I distanced myself from popular colorful graffiti and for years I painted only with silver and black. I continued this purist approach in my Calligraffiti. But color can be very seductive, so I slowly started to experiment with metallics and iridescent paints around 2012. Now that my style has become less (calli)graphic and is multilayered, I’m using color, but always in a way that it is unidentifiable. A color is only an idea in a viewer’s mind. Colors don’t really exist. Not in the way that shapes do. They are elusive. In my recent paintings, the color of a pigment is defined by the viewing angle, the angle of light and creases in the unstretched canvas.

WW: You started using more color in your art. Can you tell us what initiated this change? Would you agree that color in your work, due to different qualities it has depending on the viewers’ angle, possesses even more dynamism than shapes?

NSM: Behind every great shape there’s a great color. Even if that color appears to be black.

NSM: Unlike the designer or art director, the artist does not work with a brief or proposition. The artist’s realm is solely his own. I consider it a state of mind where supposed opposites, such as madness and method, must merge.Sometimes, when I’m really content with the way a certain piece turned out, I try to paint another one in a similar way, to get the same satisfying result. That never works because then there’s not enough madness to the method. Eventually, I find other ways to win the battle against the canvas. But it’s different every time.

That said, my painting process generally starts with some sort of imagined visual (which is never anything like the result). Then, I lay out the canvas on the floor, and sometimes pin it down. But I learned never to commence the attack, if I’m not in a winning mood. So sometimes I wait a few hours, or even days, before the first strike. After that, I use my extended arsenal of brushes, brooms, fake plants, spray devices and plenty of acrylic ammunition to give that woven rectangle a proper beating.

Basically, it’s a nonstop frenzy with lots of ups and downs, cursing, physical struggle and splattering all over the place. It’s fun and agony merged into one feeling.

WW: What is your greatest inspiration?

NSM: Everything. Like everyone, I wonder about the universe, the subatomic and consciousness itself. Colossal insights come unannounced.

WW: What are the themes you usually tackle in your work and why are they of particular interest to you?

NSM: The connection between human scripture and the way plants grow. Creating is a kind of growing. All natural things have some sort of language. But it not something I can explain with words only. That’s why I paint. But flip through my new book for an hour or so, and you’ll know.

Evolution of Style and Future Plans

WW: Can you describe the evolution of your style over the years? Are there any important phases in your career you would like to highlight?

NSM: In a nutshell I went from tagging to painting big pieces and experimenting with all sorts of letter styles. Then, through typography and lettering I returned to my old love, calligraphy and started to mix this with urban hand styles.

When I had my big Calligraffiti show in 2007, I couldn’t have imagined it would become the worldwide phenomenon it is now. This is fantastic and I keep the movement close at heart, but it did push me to keep advancing, so I now paint in a style that is completely my own.

WW: Which project, exhibition, artwork etc. do you find most significant in your work so far? Can you single out some important milestones in your career?

NSM: The video of the Sweeping Beauty piece I did with water and a broom in Singapore. It has captured the imagination of many people. Also, painting a Muhammad Ali tribute in a boxing ring with Mos Def for Louis Vuitton was fun. And Shoe’s Shoes, an installation of 80 pairs of my sneakers (1982-2004) is a conceptual milestone. I can’t really choose one painting over another. That’s like saying you like one of your children better than the other one. Which would seem impossible, even if I don’t have any. And I’m very happy with my new book Shoe Is My Middle Name. It shows a mixture of my paintings, poetry, theories and many written contributions by people I respect in the art world. It’s quite monumental in size and content, if I may say so myself.

WW: What are the messages you’re trying to send to the viewers and what are the responses (feelings, questions, thoughts…) you hope to provoke?

NSM: Beauty is in the eye of the beholder. Now, you be that beholder.

WW: What are your plans for the future (this year and in general)?

NSM: I hope to spend more time in Nice next year, where I worked for three months and had an exhibition at GCA gallery. I’ve been working towards the exhibition Uncontrolled Substances for over a year, and opens October 15th 2016. I’m very excited about this solo show at the infamous gallery Gabriel Rolt in Amsterdam, where I will also be releasing my new book. Also looking forward to a big solo show at gallery Droste in Wuppertal, May 2017.