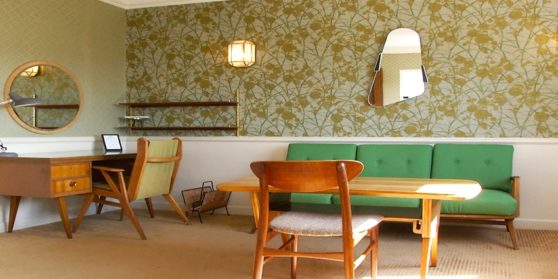 French graffiti artist Monsieur André can now add hotelier to his résumé with the retro Hôtel Ermitage. Each of the 27 stylish rooms was decorated by one of his friends (Chloë Sevigny and Christian Louboutin among them), and the hotel’s restaurant is already drawing crowds.

Attractively isolated amidst the rocky heights of St Tropez yet located just 5 minutes from Place des Lices, the Ermitage was initially built as a 19th century villa. The facade and authenticity of the existing exterior have been maintained but this sleepy family hotel has been transformed into a chic and exclusive hôtel expérience.

The new interior furnishing is both eclectic and elegant with a strong emphasis on late 1950’s design. The hotel is scattered with unique vintage and designer furniture, including rare pieces by Mathieu Matégot, Jean Prouvé and Ettore Sottsass, all having being carefully curated and personally selected by André.

Original prints by Irina Ionesco co-exist on the walls alongside more contemporary yet equally controversial photographers such as as Terry Richardson. The erotica theme sets the general mood for this hotel that boasts telephone and TV « free » rooms.

The overall feel of the Ermitage is unpretentious and comfortable with an understated chic and modernity that has come to be André’s signature style.

The Ermitage is comprised of only 27 rooms. Each room is different and individually designed by André’s friends, artists and designers such as Marc Newson, Jean Pigozzi, M/M, Christian Louboutin, Paul and Chloe Sevigny and a spécial « Purple » room by Olivier Zahm. For guests who prefer to honeymoon and make their own cocktails rather than head downstairs to the late night bar, the Belvedere suite is fully equipped with its own private bar. The rooms either over look the citadelle or offer spectacular sea views. All rooms come complete with Khiels beauty products, an exclusive partner of the hôtel which will in turn be the sole retailer for the region. Other goodies on sale will be special items such as Trudaine scented candles and a very limited edition « St Tropez » bag made especially for the Ermitage by Vanessa Bruno.

The restaurant direction is consistent with the global philosophy of the Ermitage; simplicity coupled with utmost quality. The service style is laidback French bistro with a menu created by 3 Michelin star awarded chef Michel Del Burgos placing a strong focus on fresh seasonal produce. Guests can enjoy also a glass of champagne in the garden at the Veuve Clicquot bar or indulge in a game of pétanque on the terrace.

The hotel will support the arts and provide young artists with yearly and monthly residencies. This year the Ermitage will host New York artists Aaron Young and Aurel Schmidt. 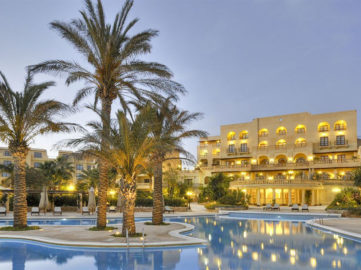 Mediterranean Cruise: 10 Art Hotels You Have to Visit