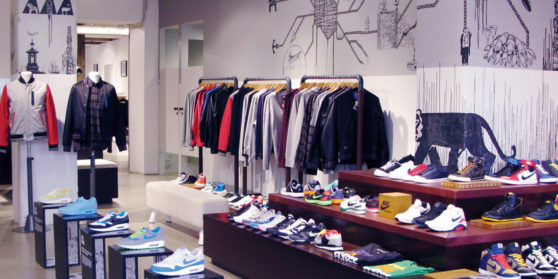 Sneakersnstuff was opened on the 26th of March in 1999. It was opened by Erik Fagerlind and Peter Jansson, both of whom had a lengthy working experience within the field of sporting goods as well as being crazed sneaker collectors, as they both felt that there was no alternative to the big retail chains dominating the market in Stockholm. After a successful trip to New York which both yielded inspiration and some exclusive goods absent in the Swedish market, Sneakersnstuff was born. Later in May the same year the web shop Sneakersnstuff.com was in full effect with a plan to sell hard to get sneakers to the rest of Sweden.

More than a decade later Sneakersnstuff is still located on Åsögatan, Södermalm, Stockholm and back in 2005 Sneakersnstuff opened up a store in Malmö. Well known troughout the world Sneakersnstuff is the store that put Sweden on the sneaker map. Widely known for always carrying carefully selected items hard to come by as well as staying true to the old school sneaker lovers with a massive assortment of classics such as Converse Chuck Taylor’s, adidas Stan Smith’s, Puma Suedes, New Balance 577’s, Nike Air Force 1’s and Air Max 1’s. In 2009 Sneakersnstuff won a grand slam at Modegalan, an annual fashion award show hosted and curated by Habit, the largest magazine for the fashion biz in Scandinavia. Sneakersnstuff recieved the Online Retailer of the Year Award, the Young Fashion Store of the Year Award and the most desirable award of them all, the Fashion Store of the Year.

Over the years Sneakersnstuff has been giving the opportunity to design sneakers for brands like Adidas, Converse, New Balance, Puma, Tretorn, Lacoste and more recently Reebok. Stay tuned for more collaborations in 2014.

Click here to see a selection of our various collaborations.

After all these years in the industry, we’re still acting like kids on Chrismas Eve evertime a new shipment arrives to the warehouse.
We love sneakers!