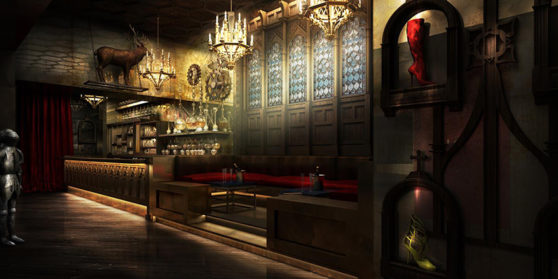 Whisky Mist is the members club situated on Park Lane and encapsulates the spirit of Scotland.

Queen Victoria’s connection with Deeside, Scotland began in 1848 when she spent a holiday at the Balmoral Estate. By 1854 she and her husband, Prince Albert, had bought the estate and replaced the old castle with a grander building, which today is known as Balmoral Castle.

On numerous occasions, whilst she enjoyed a dram of whisky in her drawing room, Queen Victoria witnessed a large majestic stag standing in the glen surrounding Balmoral. Since the heather-covered glen was often covered by a dense fog she christened this noble beast “Whisky Mist”.

Queen Victoria came to rely heavily on Crathie-born servant John Brown to help her stalk “Whisky Mist” and in 1857, after several summers of tracking the stag, they finally culled “Whisky Mist” in a single humane moment. They feasted on the venison at one of the finest banquets Scotland has ever seen.

“Whisky Mist” was then sent to the Royal taxidermist to be preserved for all of history. Allegedly it is “Whisky Mist” which now stands on display in the exclusive Whisky Mist in Park Lane, London today.

However, the story does not end here…

Queen Victoria loved horse racing and when she acquired a new stallion in 1862 she named him “Whisky Mist” in honour of the majestic stag. “Whisky Mist” went on to become one of the greatest horses to ever run in Scotland, winning countless races over his career. Before retiring in 1868, “Whisky Mist” roared to a final triumphant win in front of the largest crowd in Scottish horse racing history – over 100,000 people at the Lairds Horse Racing Track. Some of his winning trophies are behind the bar in Mayfair today and customers are able to purchase special blend drinks and toast the legend of “Whisky Mist.”